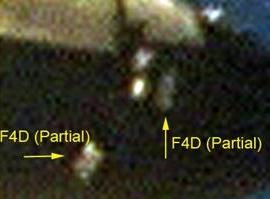 Discovery is completed her opening Thermal Protection System (TPS) inspections on Flight Day 2 of STS-119, as engineers on the ground evaluate ascent imagery and the opening ‘funnies’ reported to the Mission Evaluation Room (MER). In total, engineers have reported eight issues – all of which are minor and have no mission impact.

Flight Day 2 opened with the unberthing of the Orbiter Boom Sensor System (OBSS) via the Shuttle Remote Manipulator System (SRMS), in order to carry out surveys of Discovery’s wing and nose cap, before heading to the OMS Pods to check for any tile damage or protruding blankets.

Other items on the list for FD2 include EMU (EVA Mobility Unit) checkouts, ahead of their use on the mission’s three EVAs, and the extension of the Orbiter Docking Ring for FD3’s docking to the International Space Station (ISS).

Under evaluation, or as is the case with the first item on the list, the MER engineers only had one issue to deal with pre-launch, relating to a helium valve at the pad. This issue was corrected by the Red Team.

“A red crew was successfully sent in to the Pad to adjust a needle valve to increase flow. A waiver to LCC MPS-48 was approved.”

Discovery’s spectacular launch has been deemed extremely clean, with no foam or debris issues of note found, bar one late release relating to a remnant of a tyvek cover at T+17 seconds into ascent. However, this has already been cleared, due to no impact noted on the vehicle.

“This piece is believed to have separated by ~17.3 sec MET (~380 fps or 259 mph). Imagery shows that the piece did not impact the Orbiter. No vehicle/mission impacts ensued nor are any crew responses required.”

The covers, which protect the orbiter’s RCS (Reaction Control System) thrusters ahead of launch, are designed to release shortly after lift-off. However, late releases can become a debris concern. Despite the remnant of the cover failing to impact the vehicle, engineers used the event to ensure no damage was possible, even if it had struck Discovery.

“Problem Impact/Significance: Testing and analysis of 5-gram Tyvek remnant releases up to 1000 fps have low risk of producing unacceptable damage; however, estimated remnant size for the present F4D failure is greater than 5 g,” added the MER report.

“Since the F4D Tyvek piece that released at ~259 mph was enveloped by full-cover impact testing in terms of both mass and velocity, any impact damage would not be expected to be worse than these ground test results.

No TPS damage has been attributed to Tyvek cover releases to date. Any TPS damage attributable to these covers would be tracked under TPS damage assessment efforts. This failure has not affected (nor is it expected to affect) FRCS thruster performance. Thruster F4D was first fired at ET Sep and has performed nominally to date.”

Discovery’s launch came after a few months of evaluations into the Flow Control Valves (FCVs), which led to three valves – all of which had flow with Discovery four to five times previously – being ‘cherry picked’ for the ride to orbit.

The concern related to a liberation from one valve’s poppet during Endeavour’s STS-126 launch last year, first seen via ascent data evaluated by the MER engineers.

However, for STS-119, that data – as seen in a presentation of their data during ascent – showed all three valves performed without issue, mirroring each other’s performance via their cycles used to keep the pressurization of the tank at nominal rates.

During ascent, three indications were registered by the Wing Leading Edge Impact Detection System (WLE IDS), which are used to “feel” indications of impacts on the RCC panels.

These sensors are highly sensitive and usually detect “ghost impacts” rather than actual impacts, especially on orbit. 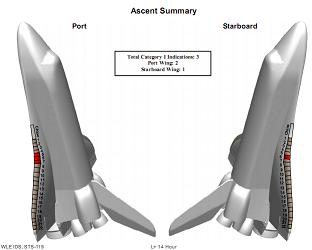 The three indications will be evaluated via their timing and strengths, in collaboration with ascent imagery.

“All WLE IDS ascent summary data were downloaded and down linked successfully,” noted the FD2 MMT presentation from the WLE IDS team, on L2.

“Twenty-two (22) half second windows of detailed G time histories were downloaded in order to confirm the implication of cases above 1 Grms. In total, there are three (3) Category I indications; one (1) on the starboard wing and two (2) on the port wing.

“Overall, background levels for STS-119 are very similar to background levels of previous missions. No data anomalies have been identified. All units triggered on Main Engine Ignition within 0.13 seconds of each other, except unit 1029 on the starboard wing which triggered 0.625 seconds early.

“The primary WLES laptop failed to receive data at approximately MET 6 hours. After troubleshooting, ACO and WIS-GFE swapped from the primary to the backup WLES laptop. A complete set of summary data files was received approximately four hours later than expected.

Following MECO (Main Engine Cut Out), Discovery separated from the External Tank (ET), before a camera in the umbilical well of the orbiter takes photography of the departing tank. An issue has been noted on the apparent lack of flashes being seen from the well, which is used to enhance the images.

“The Digital Umbilical External Tank camera flash was not observed in the live video during ET separation,” added the MER. “Based on the video downlinked thus far, the analysis confirmed the observation.

“The crew was then unable to downlink the imagery from the Thermal Protection System (TPS) camera as planned. Troubleshooting was attempted, but discontinued for crew sleep.”

An issue has also been noted with Fuel Cell O2 Flowmeter measurement, which has failed Off Scale Low (OSL), which holds slight impacts to its monitoring and use. Discovery has had similar problems of the same nature during her previous flights, such as STS-116.

“The Fuel Cell 3, s/n 116, Oxygen Flowmeter Measurement Failed OSL at 075/01:57:15 GMT,” noted a report to the Mission Management Team (MMT) on L2. “The Loss of the FC 3 O2 FM is negligible impact to the crew and a slight impact to MOD/EGIL (Electrical Generation and Illumination Engineer).

“EGIL will use other parameter such as pressure decays, purge line temperatures, and fuel cell performance to verify FC 3 purge.” 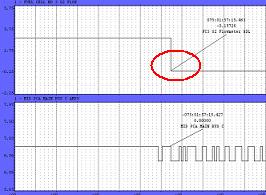 The most probable cause of the FC 3 O2 Flowmeter OSL reading is a failure of one or more electronic components within the circuitry installed in the flowmeter.

“Failure analysis performed on previous flowmeters has identified a marginal design with overstressed, obsolete EEE components within the circuit.

“With the loss of FC 3 O2 FM, the vehicle is in a stable configuration. The FC 3 O2 FM measurement has been inhibited in the vehicle Fault Detection Annunciation to avoid nuisance alarms. No additional on-orbit trouble shooting or analysis has been planned or is required.”

This particular Fuel Cell is on its last flight, due to its operating hours closing in on the time between overhaul limit. It is scheduled to be removed during post flight processing at the conclusion of STS-119.

Other issues being reported to the MMT include the apparent loss of the Avionics Bay fan. No mission impacts have yet been noted on this particular issue. Another issue relates to the RMS shoulder brace release time, which is not deemed to have any mission impacts.