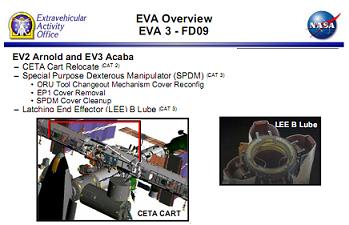 Spacewalkers Richard Arnold and Joseph Acaba have completed the final EVA of STS-119, tasked with several replanned elements, including troubleshooting on the Unpressurized Cargo Carrier Attach System (UCCAS), which proved to be problematic. Meanwhile, no issues of note are being worked on Discovery, although engineers are monitoring the amount of propellant Discovery has been using during the docked phase of the mission.

With STS-119 reduced from four to three EVAs, due to the need to undock prior to the Soyuz cut out, EVA-2 was also replanned.

However, issues were noted when attempts were made to unstow a cargo carrier attachment system (P3 NADIR UCCAS), caused by an incorrect installation of a locking pin.

“A hardware issue during EVA 2 prevented the deployment of the P3 nadir UCCAS,” noted on of the MMT department presentations on L2. “Real time troubleshooting was unsuccessful and the associated timeline impact caused several tasks to be dropped from EVA 2.”

Work on the locking pin was unsuccessful, leading to photography being taken for further evaluation on the ground, while the hardware was tied down until an EVA in the future can look into solving the issue at a later date.

EVA-3 tasks also included the relocation of a CETA (Crew and Equipment Transfer Assembly) Cart. Currently both CETA carts are on the port side of the MT (Mobile Transporter), one will be moved to the starboard side for STS-127 activities.

“S3 Outboard/Zenith PAS deploy: deferred from EVA-2 due to issues with the P3 UCCAS,” are among other tasks, along with the get aheads of: “LEE (Latching End Effector) B Lube: Lubricate the snares or SSRMS (Space Station Remote Manipulator System) LEE B side.”

Other get-aheads include: “S1/S3 Segment-Segment Attach System BBC Panel Reconfig and the installation of the CETA Coupler.

The Mission Management Team (MMT) met on Monday with no new issues in work with Discovery, with only a couple of new additions on the Mission Evaluation Room (MER) list over the weekend.

One note references an increased use of propellant by Discovery for this stage of the mission based on predictions, although that could be expected, following the use of her thrusters during the S6 Solar Array deploy, where she took control of the shuttle/station complex’s attitude in tandem with the Russian thrusters on the Station.

In addition, Flight Day 8 saw the precautionary DAM (Debris Avoidance Manoeuvre) being conducted by Discovery’s Digital Autopilot (DAP), which raised the Station away from a potential conjunction threat.

“A potential conjunction with orbital debris (Object 26264- CZ-4 Debris) was identified and required that a Debris Avoidance Manoeuvre (DAM) be performed to clear the ISS/Shuttle stack,” noted one MMT presentation.

“A retrograde delta V of ~0.9 feet per second (out of a targeted 1.0 fps) was generated by holding attitude in the undock attitude (ISS 0, 0, 0 roll, pitch, yaw) for 3 hours. The stack was then maneuvered back to the nominal Torque Equilibrium Attitude (TEA) before crew sleep.”

The other issue raised over the weekend related to a pressure anomaly on a GN2 regulator located in the midbody (midfuselage).

“After GN2 Repress on FD 6 the pressure downstream of the system 2 GN2 200 psig regulator gradually climbed to 267 psig over 20 hours,” noted an associated presentation to the MMT. “Rise in pressure attributed to an in specification leakage in a closed volume.

As of Monday’s MMT, no IFAs (In Flight Anomalies) or MER level “funnies” were in need of discussion, highlighting Discovery’s superb performance on this mission.