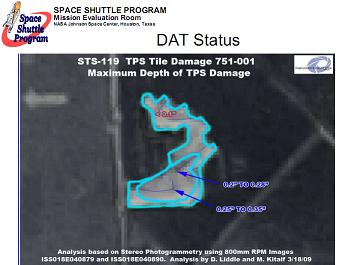 Discovery continues to perform without any issues of note as her crew completed the task of remotely deploying the 1B and 3B solar arrays from the newly installed S6 integrated truss structure on the International Space Station (ISS). The operation was a huge success for both arrays, which are now fully deployed on the Station.

S6 was successfully installed as the final set of power generating arrays on the ISS during EVA-1 on Flight Day 5, along with the initial tasks of S6 Truss Photovoltaic Radiator deployment during the EVA, and the deployment of one bay of the arrays ahead of crew wake up on Flight Day 6.

Today’s tasks opened with the S6 1B and 3B Channel Solar Array deployment. The whole task was expected to take up to five hours, partly due to the potential of communication issues between the Shuttle/Station complex and controllers at the Johnson Space Center (JSC). However, communications appeared to be stable throughout the majority of the deployment.

The reason communication issues could have been an issue was due to the solar-inertial attitude the Station utilized for the operation – which is less effective for communications than the preferred TEA (Torque Equilibrium Attitude). The reason for the alternative attitude was to  allow the arrays to ‘bake’ during 50 percent deploy.

This method was designed to avoid “stiction” – which was observed on previous deployments, most notably with the P6 arrays during STS-116, which famously saw the use of “Beamer Shakes”, as astronaut Robert ‘Beamer’ Curbeam literally shook the array panels loose. This lesson learned appears to have worked favorably.

Another added complication of controlling the Station’s attitude during the deployment required a game of tag between Discovery and the Russian thrusters on the ISS.

Normally the Station’s gyroscopes control the station’s orientation as it travels on orbit, but this method is unavailable during the deployment of the arrays. Also, controllers had to be wary of the plumes from the thrusters on both Discovery and the Russian side of the Station, which could damage the arrays.

The solution utilized the Russian thrusters at the rear of the station when the arrays on the opposite side of the ISS were extended, before Discovery took over attitude control via her thrusters for the deployment of the opposite arrays.

Other tasks that took place during the Flight Day included Shuttle/Station transfers, and continued refinement to EVA-2 procedures, which will include priority tasks from the deleted EVA-4.

The advancement of the deployment of arrays to Flight Day 6 was allowed following the release of the need for a Focused Inspection on Discovery’s Thermal Protection System (TPS).

While only Late Inspections during post undocking can clear an orbiter for re-entry, Discovery is deemed to have a very clean heatshield, following inspections on Flight Day 2, and the RPM on Flight Day 3.

One area of concern was noted on the port elevon, via observed tile damage. However, the OBSS (Orbiter Boom Sensor System) was not required to take a closer look, thanks to RPM photography that showed the maximum depth of the damage on the tile was only 0.35 inches – which is within safety requirements for that area of the orbiter.

Another “concern” was noted early on Flight Day 6, relating to a gap fller that is observed to be protruding on the left inboard elevon. This is currently being evaluated by the Damage Assessment Team (DAT) via a peer review, but is expected to be cleared within the next day or two.

“After the STS-119/15A MMT, it was determined that no Focused Inspection is required. The RTV bondline temperatures are very good and the margins for the damage to the inboard elevon are good,” noted the latest Shuttle Stand-up/Integration report on L2.

“MOD is ready to move on to the FD6 activities. Areas being assessed include the starboard OMS pod, the left inboard elevon, and the gap filler. These should be cleared in the next few days.”

Although the flash in the ET umbilical well, added to the dark conditions at ET sep, has resulted in no photographs being available of the tank after the eight and a half minute ride to orbit, the lack of damage on Discovery is a sign of yet another step on the path of reducing foam and ice liberation during the ride uphill.

“SSP (Space Shuttle Program) congratulated the team on the news regarding the Focused Inspection not being required,” added the Stand-up report. “This is a testament to the ET team and all of the redesigns done since RTF (Return To Flight).”

Meanwhile, STS-119’s Solid Rocket Boosters (SRBs) have arrived back in port and are currently under assessment, prior to being sent back to ATK for refurbishment. 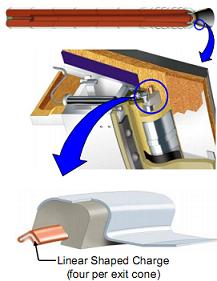 “Slip operations for the STS-119/15A boosters have been performed. Open assessment will begin this Thursday morning. At this time, the hardware looks very clean and the linear shaped charges on the aft cones appear to have functioned properly,” noted the opening report on L2.

The good report on the Linear Shaped Charges (LSC) releated to an age-life concern raised in the SSP FRR (Flight Readiness Review) for STS-119.

The concern with the age of the charges was only recently been discovered via shelf life extension testing, which resulted in one charge failing to function as designed. A second failure was observed on the same system during an Ares I-X test by ATK on January 29.

The batch lot of the problematic LSCs matches that of four of STS-119’s LSCs, leading to the issue being raised at the FRR for STS-119, and the following PRCB (Program Requirements Control Board) meeting.

A waiver was issued, which – following the postive report – appears to have been the right decision.

“The solid-state video recorders for the forward and aft cameras were off-loaded yesterday and this information has been put out on the servers,” added the post flight update. ” The ET cameras are being processed and the data will be released to the servers.”