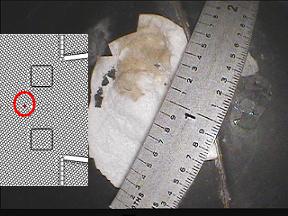 Another major milestone in the flow towards the final Hubble Servicing Mission has taken place, after Atlantis completed mating operations with External Tank (ET-130) inside the Vehicle Assembly Building (VAB). However, an incident during mating has resulted in tile damage on the belly of the orbiter, which was repaired on Friday morning.

Atlantis rolled over to the VAB on Monday, after a slight delay caused by unacceptable rollover weather. First motion out of OPF-1 (Orbiter Processing Facility) occurred at 11:30 local, with the orbiter spotted in the transfer aisle at 12:23.

Once in the VAB, Atlantis underwent S0004 (Orbiter/ET Mate) operations, which saw the Aft and Fwd Sling mate to the orbiter completed at 18:41 on Monday. Atlantis was lifted to the vertical at 2235, and being positioned in High Bay 3 for mating.

Completion of the mating operations – which is based around mating and torquing of the LH2 and LOX umbilicals on the aft of the vehicle – was delayed when a socket was accidentally dropped from near the top of the vehicle, before bouncing off the ET cross beam, impacting a tile in the umbilical area.

“During final torque of the forward bipod fitting to flight value, the socket from the torque wrench was dislodged and fell. Damage to flight hardware has been assessed as follows: ET box beam damage is minor and can be repaired in place,” added L2 processing information.

“Orbiter tile damage on the aft belly. The area is 1.25 inch x 1.25 inch and 0.25 inch deep. Engineering is evaluating of repair methods.”

Thankfully, the damage is not in the nearby ET Door edge tile area of the orbiter belly, which would have likely required demate and rollback of Atlantis to the OPF for a repair. Because the area is repairable in the VAB, the completion of LH2 and LO2 umbilical stud tensioning was approved, and occurred at 3am on Wednesday morning.

Engineers evaluated a putty repair on the damaged area. However, accessing the damage was deemed problematic, due to its location being behind the structural cross beam – making access and application of the heat lamps much more difficult.

However, the putty repair plan was approved, leading to the application work being carried out overnight, which is now ‘setting’ under the heat lamps. Rollout to Pad 39A at the end of the month will remain on schedule.

Other processing work taking place for Atlantis’ NET (No Earlier Than) May 12 launch includes the White Room at Pad 39A being extended for access to the Crew Module. Crew hatch functional work is also complete. The S0008 (Shuttle Interface Test) call to stations is planned for 1700 local on Thursday.

The Tail Service Mast (TSM) electrical mates are also complete, as the flow continues to work toward rollout of STS-125 to Pad 39A on Tuesday, March 31 – with first motion planned at 0001 EDT.

A simulation of the countdown and launch – part of S0044 operations – also took place this week in Firing Control 4 (FR4) at KSC this week, which tests controllers on their reactions to several problems the firing room system programs and project guys throw at them.

During the STS-125 simulation, more than four major issues were simulated, including an abort after SSME (Space Shuttle Main Engine) start on the second simulation. Controllers were also tasked with dealing with SSME 1 failing to shut down as commanded by the abort, which was ably dealt with during the simulation.

Meanwhile, good news has been noted on the replacement hardware that Atlantis will carry to Hubble – which will replace the Science Instrument Command and Data Handler (SIC&DH) Side-A that failed back in September.

The replacement SIC&DH has completed an exhaustive test program, with positive results ahead of being shipped to KSC where it will become part of STS-125’s payload.

A recent scare had been noted, relating to a major subsystem that was deemed to have failed. However, this was traced back to a misbehaving VAX computer on the test suite.