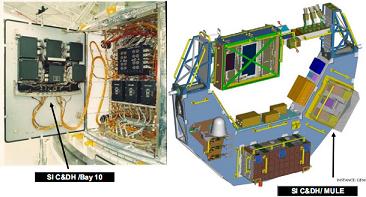 With Space Shuttle Atlantis and her crew now less than two weeks away from launch on the highly anticipated fifth and final servicing mission to the Hubble Space Telescope, NASA managers are continuing their review of all critical elements of the mission ahead of the now planned May 11 launch date.

Space Shuttle Program (SSP) managers met last week (April 20-21) for the SSP Flight Readiness Review (FRR) – 32 presentations available to download on L2 – which culminated in a positive recommendation for flight that will be brought before the Space Operations Mission Directorate (SOMD) on Thursday, where it is expected that final approval for flight will be given.

With the launch of STS-125 delayed from last October due to the failure of side-A of the Science Instruments Command & Data Handling (SIC&DH) unit on the Hubble Space Telescope (HST), NASA engineers have been working hard to get the replacement SIC&DH unit ready to fly with Atlantis.

With the replacement unit now sitting in Atlantis’ payload bay, their months of hard work have paid off. However, manifesting this device has caused mission planners to re-think their priority list for the fifth HST servicing mission.

In fact, Removal and Replacement (R&R) of the SIC&DH is now third on the flight crew’s list of priorities. As noted in the SSP FRR Mission Overview document – available for download on L2 – the HST SM4 (Servicing Mission 4) priority list is:

These aforementioned activities can all be accomplished within the mission’s first three EVA (Extravehicular Activities or Spacewalks).

To accomplish Full Mission Success, all five of the flight’s planned EVAs will have to be performed. The EVAs, which are all scheduled to last under or just equal to 6-hours 30-minutes, will see it the installation of WFC-3, the R&R of SIC&DH, and the installation of the SCM on EVA-1 – which will be performed by John Grunsfeld and Drew Feustel.

EVA-2 – performed by Mike “Mass” Massimino and Mike “Bueno” Good – will see the installation of the RSUs and the R&R of batteries in Bay 3. 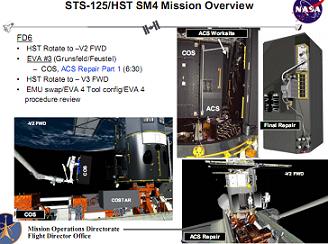 Furthermore, on EVA-3 Grunsfeld and Feustel will install the COS and perform part one of the ACS repair.

Of particular note in the Mission Overview document is the discussion surrounding the ACS repair plan.

“Due to time limitations and mission priorities only ACS Part 1 is shown on EVA timeline,” notes the presentation. “ACS Part 1 tasks are scheduled to provide the ability to complete the ACS repair on EVA-5 should the STIS repair be unsuccessful.”

Furthermore, the addition of the ACS repair part two would also depend on the successful completion of COS activities and the EV crew’s health during EVA-3.

However, if the ACS repair part two is permitted during EVA-3, the repair would only take place after all get ahead tasks for the procedure were completed during EVAs 1 and 2 and if those get ahead activities reduced the amount of time the door for ACS was open on EVA-3 by at least 25 minutes.

As noted several times by this site, Atlantis will not have the option of performing a Rbar Pitch Maneuver like all previous post-Columbia flights have done as they approach the International Space Station (ISS).

Instead, Atlantis’ crew will have to use the vehicle’s Orbiter Boom Sensor System (OBSS) and onboard digital cameras to perform a near-complete inspection of the Orbiter’s Thermal Protection System (TPS).

A complete inspection cannot be accomplished because the OBSS is not long enough to reach the aft portion of the vehicle (i.e. the Main Engines). However, this area is not deemed critical to reentry as it experiences higher temperatures during liftoff than on descent. Therefore, the OBSS limitations for this area are acceptable for flight.

However, as seen on all post-Columbia flights, Atlantis’ crew will perform the standard OBSS inspections of the Wing Leading Edge (WLE) panels and nose cap. Additionally, several other inspections have been added to ensure that all critical areas of the TPS are examined. 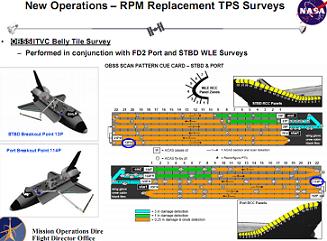 For example, on Flight Day-2 (FD-2), Atlantis’ crew will maneuver the OBSS underneath the Orbiter and perform a series of imaging sweeps of the orbiter’s belly and acreage tiles.

These series of sweeps will cover the entire belly of Atlantis – including the landing gears doors and ET umbilical well doors – at all “required damage detection criteria.”

Additionally, the crew will perform an inspection of the T-0 Umbilical areas. However, this extra procedure could be deleted form the inspection timeline if no concerns from this area are noted during the standard review of ascent imagery.

In all, the additional inspections will add approximately two and half to three hours to the total inspection period on FD-2. The current pre-mission plan is downlink all imagery to the ground by the end of FD-2.

While engineers do not expect to find any critical damage during the FD-2 inspections, flight planners have blocked out a portion of time on FD-5 where the crew could conduct a Focused Inspection.

The placement of the Focused Inspection on FD-5 will minimize the impact on the EVA and crew timelines.

If the Focused Inspection is needed, the foot restraint that will be attached to the end of Atlantis’ Shuttle Remote Manipulator System (SRMS) will have to be removed at the end of EVA-1 on FD-4 and reinstalled prior to the start of EVA-2 activities.

However, since the severity of the TPS damage that would require a Focused Inspection cannot be determined in advance, it is possible that some EVA tasks will be affected.

In the worst case scenario, the R&R of batteries in Bay 2 would be deleted from the mission’s timeline in order to ensure that all necessary TPS data is collected during the Focused Inspection.

With STS-125’s opening launch day advanced to May 11, Atlantis is now targeted to lift-off at 2:01pm. EDT. This launch date was advanced from May 12 to provide KSC launch personnel the opportunity to try three launch attempts in a row before standing down because of a Range conflict that starts on May 14. 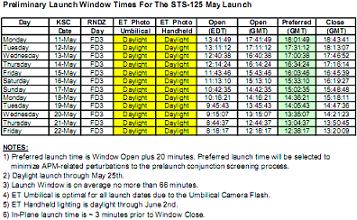 For the duration of Atlantis’ launch window, however, the time of launch will be targeted for approximately 20-minutes after the opening of the launch window in order to provide the best possible Ascent Performance Margin for the vehicle.

Furthermore, because of the inclination (28.5 degrees) that Atlantis will be launched on, only one TAL (Transoceanic Abort Landing) site will be available. This TAL site, located in Moron, Spain, is the only certified TAL landing field within Atlantis’ cross range capability.

While TAL sites are extremely important for all Shuttle launches, this mission is unique in recent history as there will be a 13-second gap between the point of Negative Return for an RTLS (Return To Launch Site) abort and the moment when Atlantis will have gained enough momentum to perform an Abort To Orbit (ATO).

In this 13-second period, the only in-tact abort mode available to Atlantis’ crew will be the TAL abort to Moron.

For clarification, Shuttles usually reach the Negative Return for RTLS aborts around T+4mins (though this varies depending on mission parameters and orbiter weight). The Negative Return boundary is the point when the Shuttle has gained too much velocity and passed too far down-range to safely return to the Kennedy Space Center.

In comparison, the beginning of the ATO boundary is marked by the time when the shuttle can reach a lower-than-planned-but-safe-orbit in the event of a single engine failure.

Unlike missions to the ISS, Atlantis will not be able to perform an ECAL (East Coast Abort Landing) because she will be launched due east from the Kennedy Space Center. 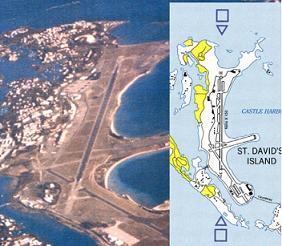 However, the SSP FRR presentation does note that emergency landing fields on the island of Bermuda and in Banjul, The Gambia will be available to Atlantis’ crew only in the event of “multi-failure scenarios” or a systems failure after the last TAL opportunity passes.

An additional item of interest for Atlantis launch pertains to the External Tank (ET) camera that overlooks the Liquid Oxygen Feedline. The presentation notes that the live downlink from the ET camera will be lost 7-minutes 30-seconds after launch because, with no backup tracking station to handover to, the MILA tracking station at the Kennedy Space Center will lose the signal over the horizon.

Thus, there will be no video of ET separation. However, all engineering data on the ET will be collected through the umbilical well cameras in Atlantis as well as handheld photography of the tank by the flight crew.

The SSP further notes that the standard +X maneuver for ET photography by the umbilical well cameras may be deleted from the mission’s timeline because of rendezvous phasing concerns with HST. Nonetheless, if the +X maneuver is deleted, hand-held photography of the tank will still be accomplished through the pitch maneuver performed by the orbiter shortly after ET separation.

In all, Atlantis has daylight launch opportunities through May 25, with acceptable ET hand-held photography lighting conditions through June 2nd.

Downstream processing and planning – preparing the fleet through to STS-135