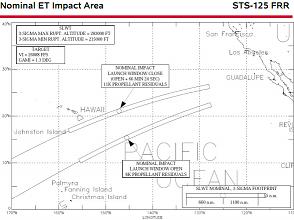 With Space Shuttle Atlantis undergoing her second round of pad processing for the much anticipated flagship mission to the Hubble Space Telescope in May, NASA managers continue to refine the complex ballet of procedures for STS-125 and its associated Launch On Need (LON) mission, STS-400 – with Endeavour on track for rollover to the VAB on April 10.

The Mission Operations Directorate (MOD) Flight Readiness Review (FRR) process is complete for this mission, with the next milestone coming via a new SSP (Space Shuttle Program) FRR later this month.

During this review, the MOD discussed the various parameters pertaining to Atlantis’ and Endeavour’s ascent and entry profiles.

For STS-125, a launch window of approximately 66 minutes will occur everyday, with the opening of each day’s launch window moving about 30 minutes earlier than the previous day’s window.

Moreover, given that the Hubble Space Telescope’s orbit is inclined to a different azimuth than that of the International Space Station, Atlantis’ launch trajectory will preclude the use of two normally available Trans-oceanic Abort Landing (TAL) sites – Istres, France and Zaragoza, Spain.

The MOD presentation also notes that “TAL site required and Moron is the only one within cross range capability. Ten second gap (exists) between Return To Launch Site (RTLS) Negative Return and Press to ATO (Abort To Orbit) boundary. Moron is the only usable TAL site due to inclination.”

The MOD goes on to say that an emergency landing site at Bermuda will also be available in the event of a multiple failure scenario that would prevent the safe execution of an RTLS or TAL abort. A presentation of all the world-wide abort landing sites is also available on L2.

Also discussed by the MOD is a specific point about the External Tank, with the main point relating to the position at which the ET reenters the atmosphere and impacts the Pacific Ocean after launch.

For the Hubble mission, and associated STS-400 LON (Launch On Need) rescue mission, the ET impact zones are just to the south of the Hawaiian Islands – ranging anywhere from approximately 660nm south of Hawaii to 1100nm west of the Baja Peninsula or just a few miles south of Hawaii’s southern cost to 1100nm from Baja.

Furthermore, should STS-125 incur multiple delays, resulting in a night time launch, ET photography will be satisfied through the use of Atlantis’ ET Umbilical Well camera and associated flash system.

Despite the fact that, if needed, Endeavour would be launched to the same orbital inclination as Atlantis, there are several aspects to the STS-400 ascent and rendezvous profile that differ from STS-125.

The first difference is that of STS-400’s launch window. “Launch Window duration varies and is a function of Flight Day 2 (FD-2) rendezvous phasing,” notes the presentation. “Preferred launch time will target the beginning of FD-2 phasing/rendezvous capability.”

While a FD-2 rendezvous with Atlantis is the prime choice based on the STS-400 mission timeline, FD-3 rendezvous capability will be granted to the launch team at the Kennedy Space Center to increase the duration of the launch window.

Furthering the difference between STS-125 and STS-400 is the lack of a TAL site for Endeavour’s rescue mission. “No TAL site required for STS-400,” notes the MOD. “RTLS and Press to ATO abort boundaries overlap. TAL Support Team will release support after STS-125 launch.” 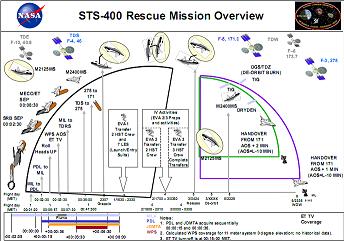 Once Endeavour reaches orbit, rendezvous preparations with Atlantis will begin in earnest. Unlike all previous post-Return to Flight missions, should Endeavour actually be launched on STS-400, the four person crew will not perform the standard Thermal Protection System (TPS) inspections on FD-2.

Instead, all TPS inspection related operations will be differed until after the STS-125 Flight Crew rescue milestones are complete.

For rendezvous operations, Atlantis will be maneuvered to an orientation that places her Payload Bay toward Earth and her starboard side on the velocity bar (Vbar).

Endeavour will then approach Atlantis from the Rbar (from underneath), “flying at a 90 degree angle to Atlantis to minimize RCS plume impingement effects during final braking” to a grapple range of approximately 44ft.

Once Endeavour reaches this position, both Orbiters will be placed in free drift to allow Endeavour’s crew to use their Shuttle Remote Manipulator System (SRMS) to “grapple Atlantis using the forward grapple fixture on Atlantis’ berthed Orbiter Boom Sensor System (OBSS),” added the MOD presentation.

After Endeavour successfully grapples Atlantis, Endeavour’s crew will nullify any rotational rates between the two orbiters.

Then, once Atlantis’ crew is safely aboard the rescue orbiter, Endeavour’s crew will maneuver the two vehicles to the proper separation orientation. This orientation will see Atlantis flying belly first along the Vbar with Endeavour right ‘behind’ her. 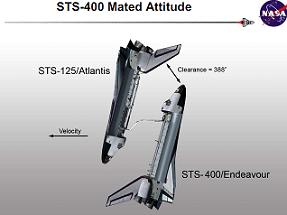 Both Orbiters will have their payload bays facing each other as Endeavour’s SRMS will still be grappled to Atlantis’ OBSS.

For separation, the MOD has approved an ungrapple time of sunrise +2minutes to ensure that the ungrapple and first part of separation occur in daylight.

The first issues discussed in the general Ascent/Entry topics section of the MOD FRR relate to the Space Shuttle Main Engines (SSME). The first item discussed by the MOD relates to the capability to downlink Advanced Health Monitoring System (AHMS) data.

This procedure will be performed between MECO and Mission Elapsed Time (MET) 25minutes. In addition, new flight procedures have been developed to support this operation, which involves delaying the power down of the main engine controller.

In addition, the MOD also discussed two aspects of the STS-125/400 entry profiles, the first issue being the public risk assessment for entry and landing operations.

Here, the MOD notes that the same philosophy will be employed for Atlantis’ 28.5 degree inclination mission as is applied to International Space Station missions which fly at 51.6 degrees.

Given that the STS-120 mission performed a reentry over the heartland of the United States (and that NASA was willing to have STS-119 perform a descending node reentry in the event of a late February 2009 launch), Atlantis’ possible reentry over the southern United States is not expected to be an issue as long as her Thermal Protection System is given a clean bill of health.

With five back-to-back EVAs planned for Atlantis’ Flight Crew, and limited cryogenic consumables, NASA has developed a set of procedures to deal with the possibility that one of the mission’s spacewalkers (EV crewmembers) may be unable to support a planned EVA.

“With 5 ‘back-to-back’ EVAs it was important that we had an agreed upon plan/philosophy/guideline so we could quickly react to this scenario,” notes the MOD FRR presentation.

The MOD goes on to note that all EVAs will be performed in the order they are currently planned.

“Re-sequencing of EVAs results in a significant amount of inefficiencies. EVAs currently optimized and include planned tasks to minimize EVA duration for subsequent EVAs.”

However, this plan assumes that the affected EV crewmember is able to recover in time to support subsequent EVAs. Nevertheless, should the EV crewmember not recover, the current plan is to execute the EVAs per the pre-launch timeline with some consideration given to EVA elimination or EVA task replanning based on EV crew cross-training and crew fatigue requirements.

Based on carbon dioxide levels observed on the last Hubble Servicing Mission, and recent ISS shuttle missions, a new LiOH canister change out procedure has been developed for STS-125.

“STS-125/HST LiOH Plan is to perform dual can change outs except Pre-sleep on FD1, FD3, FD4, FD5, FD6, FD7 and FD8 (which are single can),” notes the MOD presentation. “Predicted Levels assume seven hours of crew exercise a day.”

This procedure, whose need will be evaluated real-time by Mission Control, has been reviewed and approved by STS-125 Mission Commander Scott Altman who was also the commander of the last Hubble Servicing Mission: STS-109 in March 2002.

In the unlikely event that Atlantis becomes disabled, NASA has developed a series of procedures to accommodate two shuttles being on orbit at the same time. 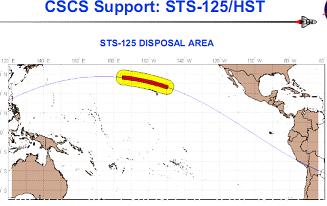 If this scenario is needed, the Flight Control Team would remotely command Atlantis’ OMS engines for a deorbit burn that would place the vehicle on a destructive reentry profile.

For this operation, Atlantis’ destruction would be targeted for the waters to the north of the Hawaiian Islands.

Furthermore, the MOD presentation notes the various amounts of time Atlantis’ crew could wait for rescue if unfavorable damage is detected.

If un-repairable damage is detected during the FD-2 TPS inspections, and the decision is made to conduct an immediate Group C+ power-down, Atlantis could act as a life raft for her Flight Crew for just over 24 days if needed. 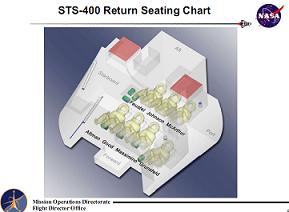 Similarly, should un-repairable damage be detected on FD-10 during the late inspections, and the decision is made to move immediately into Group C+ power-down, Atlantis could act as a life raft for an additional 16.5 days, with the STS-400 rescue mission arriving No Earlier Than 15 days 16 hours after the damage was detected.

Instead of the STS-400 mission being crewed by the Flight Deck crew of STS-123, it will now be manned by a four person subset of STS-126: Commander Chris Ferguson, Pilot Eric Boe, and Mission Specialists Steve Bowen and Shane Kimbrough.