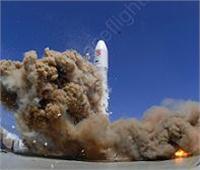 Sea Launch were in action early this morning, with the launch of SICRAL 1A – an Italian military communications satellite. Liftoff was at the opening of a 57-minute window, at 1:16am PDT (08:16 GMT), from the Odyssey Launch Platform out in the Pacific Ocean.

From its equatorial launch site at 154 degrees West Longitude, a Zenit-3SL launch vehicle inserted the 3,038 kg (6,697 lb) SICRAL 1B spacecraft to geosynchronous transfer orbit, on its way to its final orbital location at 11.8 degrees East Longitude.

Following a coast period of one hour and 18 minutes, the Block DM will burn a second time for three minutes. After the second burn, and another 10-minute coast, the spacecraft will separate from the upper stage over central Africa. A ground station at Telespazio’s Fucino Space Centre in Italy is expected to confirm the status of SICRAL 1B satellite soon after spacecraft separation.

Monday’s launch will mark another success for Sea Launch since they returned to flight in January, 07 – following the failed launch which occurred with the NSS-8 communications satellite for SES New Skies, after the vehicle exploded on the launch pad, destroying both the vehicle and satellite.

Sea Launch are conducting the launch for Telespazio, a Thales/Finmeccanica company, based in Rome, after the contract was signed in 2007.

Built in Torino by Thales Alenia Space Italia, a Thales/Finmeccanica company, the dual-use Italsat 3000 bus spacecraft was integrated and tested in Cannes, France.

SICRAL 1B will provide strategic and tactical communications services for the Italian armed forces, in Italy and abroad, as well as ensuring mobile communications with land, naval and air platforms. It will also provide NATO forces with UHF and SHF SATCOM capabilities.

The launch of the SICRAL 1B satellite will follow the successful deployment and operation of SICRAL 1A, part of Italy’s first military communications satellite system dedicated to national security. SICRAL 1B has an expected operating life of 13 years and is designed to extend the potential of the system within NATO programs until 2019.

As an investor in the SICRAL 1B program, Telespazio will have access of some of the satellite’s transmission capacity from its final orbital position at 11.8 degrees East Longitude.