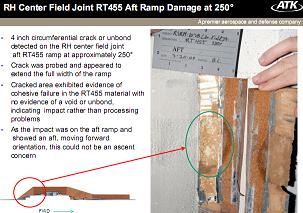 The usual ballet of reviews to ensure safe flight has moved through another key stage, following the full review of STS-119’s IFAs (In Flight Anomalies). With the next two missions heading to different orbital destinations, part of the IFA review will go towards STS-125’s upcoming Flight Readiness Review (FRR), and the ISS related section forwarded to Endeavour’s STS-127 mission.

Most of the issues reviewed were known about as and when they occurred during Discovery’s mission, and only a handful of elements requiring further evaluation – such as the issue with the ET Umbilical Well Camera, which failed to flash more than once, along with issues downloading any usable imagery of the External Tank post separation.

“IFAs: There were no significant issues with any of the IFAs but the flight rationale for the partial Tyvek cover release and more information on the Umbilical Well Camera Flash/Download problem will be discussed at the PRCB (Program Requirements Control Board) meeting,” noted an L2 acquired 8th Floor (MOD) summary on Monday.

“MOD (Mission Operations Directorate) presented one IFA for the Abort Light command being inadvertently sent prelaunch. There is one other potential MOD IFA for WFCR2 (GNC console) sluggish performance.

“The Loss of ISS to Ground Voice during the RPM (Rbar Pitch Maneuver) was briefed as an item of interest. MOD is tracking this item with an ISS anomaly to ensure adequate closure prior to STS-127.”

The full STS-119 IFA review consisted of 15 presentations – all available on L2 – ranging from the state of the launch pad, propulsion systems, and flight software. Below is the review of STS-119’s boosters.

The imbalance is caused when one booster loses pressure during burnout slightly faster than its opposite number, causing the stack to yaw slightly – which usually results in the SSMEs (Space Shuttle Main Engines) and/or the SRB TVC (Thrust Vector Control) system countering to keep the shuttle on the correct trajectory.

“All RSRM countdown parameters were within limits and within family. Overall performance of both RSRM motors and all ATK BSMs (Booster Separation Motors) excellent and well within requirements,” noted the ATK IFA presentation on the Reusable Solid Rocket Motors.

“RSRM tail-off thrust imbalance slightly outside of historical family (but within statistical expectation) at discreet time intervals. Overall performance of both STS-119 (RSRM-103) motors and ATK BSMs were excellent.”

The lack of dedicated section on the tail-off thrust imbalance, with only passing mentions on some of the other IFA review presentations, points to the issue requiring no further action. During STS-124’s post flight IFA review, several follow-up presentations were required for further understanding.

Elsewhere on the boosters, seven “squawks” – booster speak for an issue – were noted on STS-119’s RSRMs, which is usual and slightly lower than some recent flights.

“4 inch circumferential crack or unbond detected on the RH (Right Hand) center field joint aft RT455 ramp at approximately 250 degrees,” noted one of the squawks found on the boosters during post-retrieval inspections.

“Crack was probed and appeared to extend the full width of the ramp. Cracked area exhibited evidence of cohesive failure in the RT455 material with no evidence of a void or unbond, indicating impact rather than processing problems

“As the impact was on the aft ramp and showed an aft, moving forward orientation, this could not be an ascent concern.”

Such damage can be caused when the boosters impact the water, following their parachuted return to the ocean after the two minute assist of the shuttle during first stage flight.

However, every inch of the returned boosters are examined for any “out of family” area of interest, even if it had no detrimental effect during powered flight. 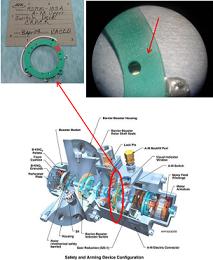 An example of which related to foreign object material found inside a safety and arming device, following it strip down after flight.

“Foreign material (fiber) was found in Arming Monitor Serial Number 0000021R12; part was refurbished in Nov 2006, prior to any recent corrective actions,” noted the presentation. “Fiber was located on switch deck insulator. Foreign Material had no effect on A-M operation.”

This device was also noted on another squawk, relating to a cracked switch (see left).

“Crack had no effect on Switch Deck, A-M, or S&A Operation. Cracking mechanism is understood. Brittle molding material may crack thru mold tool pinholes when removed and go unnoticed through several refurbishments.”

The other squawks related to excessive grease on a vent port plug, more foreign objects, and another crack – this time on the ignitor chamber insulation, which was not deemed to be a problem.

Separate from the RSRM review are the Solid Rocket Boosters (RSRB), which were reviewed by the United Space Alliance (USA). A total of 14 squawks were found on STS-119’s SRBs. 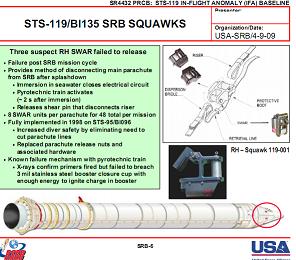 A problem with the SWAR (Sea Water Activated Release) ‘failures to release’ was again noted, this time with three of the devices on the RH Booster – which is a known condition that has occurred on a number of flights in succession now.

The SWAR provides a method of disconnecting main parachute from SRB after splashdown, with the immersion in seawater closing an electrical circuit to release a shear pin from the riser about two seconds after immersion.

The SWAR was fully implemented in 1998 on STS-95, in order to increase diver safety by eliminating need to cut parachute lines. Since STS-122, the problem has been heavily documented on both post flight and pre-flight Flight Readiness Review (FRR) presentations.

The problem is believed to be associated with a known failure mechanism with the pyrotechnic train, when the primer fails to breach the stainless steel booster closure cup with enough energy to ignite charge in booster.

One highlight of the RSRB IFA presentation was the performance of the modified Hold Down Posts (HDPs), which suffered an anomaly during STS-126’s launch, spreading debris across the launch pad, including a large metal spring – which would obviously be a major debris impact hazard for the shuttle, as noted in several presentations on the incident, the modifications, and the risks.

Click Here for NASASpaceFlight.com’s articles on the HDP issue and resolution.

Interestingly, there appears to have been another failure on one of the posts, which would have resulted in an identical debris hazard as seen on STS-126, had it of not been for the newly modified Debris Containment System (DCS) on the HDPs – as was called for during the redesign post STS-126.

The physical threat to the vehicle relates to either large pieces of debris – such as the large metal spring found in the north trench after STS-126 – or small sharp fragments of metal – such as tube lock clips – potentially impacting an OMS Pod, a SSME (Space Shuttle Main Engine), an aft Reaction Control System (RSC) “venier” thruster, or part of the vehicle’s TPS (Thermal Protection System).

Given STS-119’s lift-off saw an issue with one of the HDPs, the first live test of the modified system has – in effect – been carried out, and was found to be a huge success.