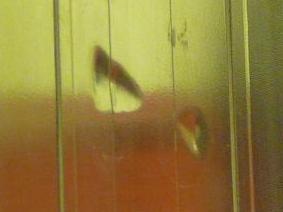 A crack has been observed on Atlantis’ damaged port radiator, and will undergo a repair – following further evaluations at the pad. The crack is in the area that was accidentally impacted by a socket that fell off the end of a wrench during processing last week, with the subsequent dent initially cleared to fly as is, prior to the formation of the crack. The repair is not deemed as an impact to the May 11 launch target.

Processing continues to track the timeline – pending the successful repair of the radiator crack – highlighted by closeouts of the vehicle, and the preparations for the installation of Atlantis’ Flow Control Valves (FCVs).

“S1287 Orbiter Aft Closeouts continue throughout the week and conclude with the Aft Confidence test planned for Monday, May 4,” noted processing information on Tuesday, via L2. “Flow Control Valves are expected to arrive today. Installation will begin tomorrow.

Work on the HST SM-4 Interface Verification Test (S07125) began yesterday and will conclude on Thursday. However, this was interrupted slightly by a power issue.

“During the initial portion of the HST Interface Verification Test (S07125), the FSS (Fixed Service Structure) FMPM-A did not power ‘On’ when commanded via Standard Switch Panel L12,” added Tuesday processing information.

“Upon inspection, two connectors at the SIP panel in Bay 12 Port Side (J106 and J107) were found to be swapped. Payload Test requested immediate safing which was completed.

“Engineering Review verified no hardware was damaged and the payload was protected through circuitry. The connectors were swapped, proper configuration was confirmed, and testing resumed. Payload operations complete through verification.”

It was expected that the radiator would be fine to fly in it current state, given the damage was slight and had avoided the important Freon-22 cooling lines. Due to the lack of evidence of a crack in the damaged area, managers made a preliminary decision to defer the repair until Atlantis is back in her Orbiter Processing Facility (OPF) post STS-125.

“Completing an analysis for the radiator damage on OV-104 (Atlantis). The evaluation being looked at is whether to repair this flow or next. Preliminary analysis implies we could delay to repair, but that will be going through the technical community for concurrence on Monday,” noted JSC’s Orbiter Project Office (OPO).

However, it was during those final inspections that a crack was observed in the immediate area the torque wrench socket had impacted.

“Engineering went out to the pad Monday afternoon at the request of Boeing Engineering to photograph the dent in Radiator Panel LH4. While photographing the defect the USA STR Engineer noticed a suspect crack,” engineering notes on L2 revealed.

A repair had not been officially called for as of Monday.

“USA, NASA and Boeing have all inspected the crack. Additional inspection (visual with a 10X and a first run of eddy current) will be performed on the radiator to assess the extent of the crack.”

A leading theory as to why the crack formed after the initial inspections is thought to be the ‘relaxing’ of the radiator sheet, once protective tape was removed from the area.

“The quality inspector was interviewed and did not see any cracks at the time of his inspection, he was very surprised to see the crack and questioned if there was any work done in the area after his inspection (there wasn’t any),” added the engineering notes.

“The current theory is that the tape was acting as a doubler, when the tape was removed, the face sheet relaxed sometime over the course of the weekend, and the crack formed. Pressure had been applied to the face sheet when bear-tex was used to remove adhesive.

“The people working in the PCR (Payload Checkout Room) are being interviewed to see if any pictures were taken on Thursday night or Friday, if anyone noticed a crack or if the possibility exists that someone or something inadvertently disturbed the dent.”

However, by Tuesday morning, engineering notes (L2) overviewed a confirmed repair plan, which involves a “standard” repair of removing the damaged area, and replace with two plugs and a doubler.

Work should begin on Thursday and be completed in time for Payload Bay Door closure on May 8th. Further notes will follow in Tuesday afternoon’s article.