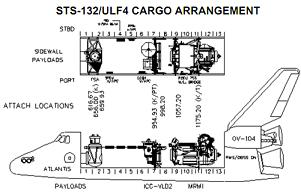 With Discovery safely back from STS-119, Atlantis undergoing pad processing for STS-125, and Endeavour ready to roll to the VAB on Friday ahead of STS-400/127, NASA is hard at work preparing for a busy summer launch schedule while planning continues for future flights. Of these future flights, the Program Requirements Control Board (PRCB) has officially baselined the STS-132/ULF-4 flight – a mission that will see the Russian Mini Research Module-1 (MRM-1) added to the International Space Station.

STS-132 will mark the 32nd and final “scheduled” flight of Space Shuttle Atlantis since her inaugural flight in October 1985. Targeting launch No Earlier Than (NET) May 13, 2010, STS-132 has been baselined as an 11+1+2 day mission, with three scheduled EVAs (spacewalks) and the option to add an extra EVA should the need arise.

To accomplish all of the mission’s objectives, Atlantis will carry the MRM-1, the Integrated Cargo Carrier – Vertical Light Deployable (ICC-VLD) with several assorted payloads, along with a sidewall SPA Beam payload.

Packed onto the MRM-1 will be several module-specific items as well as spare parts and a portable work platform, as outlined in the PRCB baseline presentation – available to download on L2.

Among the various items attached to the outside of the MRM-1 will be several pieces of outfitting hardware for the MRM-1’s Multi-purpose Laboratory Module (MLM). These items include the MLM payload airlock, the MLM radiator, a spare elbow assembly for the European Robotic Arm (ERA), and the Portable Work Platform for the ERA.

In addition to its externally mounted payloads, the MRM-1 will carry approximately 1,400 kilograms of internal U.S. supplies to the ISS. After MRM-1 is installed, the total usable stowage volume available to Expedition crewmembers will be 6.0 m3.

The second major payload of the mission is the ICC-VLD, a cargo carrier that will be packed with eight payload elements.

Furthermore, the final cargo element is the sidewall SPA Beam plus Passive FRAM. This payload will be contained within a standard Sidewall Mounted Carrier and will be delivered to the ISS during the mission.

A “to be determined” ISS ORU (Orbital Replacement Unit) payload will return to Earth with Atlantis in the Sidewall Mounted Carrier.

To support the diverse nature of the STS-132 payload, several Payload Bay (PLB) support elements will be flown – such as the Remote Operated Electrical Umbilical, which will provide power and data to the MRM-1 while it is berthed in Atlantis’ PLB. 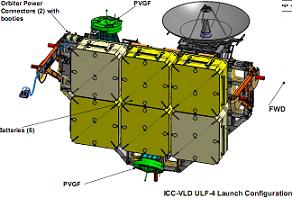 Furthermore, an EVA Cable Stowage Hardware will be installed in PLB port bay 6. This element will support LTA cable stowage for the ICC-VLD. Additionally, several Payload Power Switching Units will be used in PLB starboard bay 5 to route power to the ICC-VLD.

As always, Atlantis will fly several middeck payloads during STS-132.

During ascent, Atlantis will carry three passive lockers which will include one ambient GLACIER and one late load/time critical payload investigation, a National Lab Pathfinder (a Commercial Generic Bio-processing Apparatus), one GLACIER unit, and one International Partner allocation payload.

At the end of the mission, Atlantis will return with two powered lockers including two GLACIER units and one International Partner conditioned Unit.

As with every flight, mission managers have identified, and categorized, the primary mission objectives for STS-132. 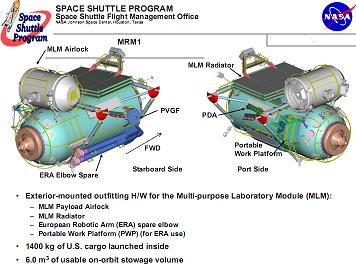 Most of these mission objectives will be accomplished during the mission’s three EVAs.

SGANT and boom installation to Z1 will occur during EVA-1 on Flight Day 4 (FD-4) with ICC-VLD installation on POA following shortly after the completion of the EVA.

For EVA-2 on FD-6, four P6 batteries will be Removed and Replaced and the Space Station Remote Manipulator System (SSRMS) will remove the ICC-VLD from the POA.

During EVA-3, the final two P6 batteries will be R&Red, the ICC-VLD will be reinstalled on POA, and the OTP will be removed and the EOTP installed to the SPDM. 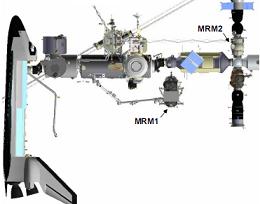 Under the preliminary mission timeline, Atlantis will undock for the final time from the ISS on FD-10 for a landing on FD-12.

However, despite initial planning efforts, early indications are that the EVA content of the mission will not fit within the allotted three EVA structure. Robotic choreography and “EOTP removal from ICC and R&R with the OTP doesn’t fit in preliminary timeline,” notes the baseline document.

In addition to these timeline issues, flight planners are also evaluating the positioning of the PVGF on the ICC-VLD, conducting robotics analyses of the cargo element transfer operations from the ICC-VLD using the SSRMS, and examining EVA crew access, clearance, and task time assessments for the SGANT and SGANT Boom transfer operations.