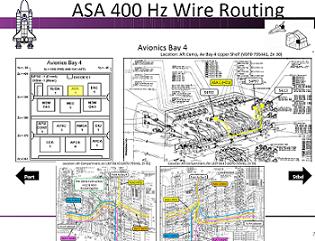 Endeavour remains on track for the setting of a June 13 or 14 launch date at next week’s Agency level Flight Readiness Review (FRR), despite the requirement for additional SSP (Space Shuttle Program) level evaluations. Several factors, including Atlantis’ In Flight Anomalies (IFAs) – notably the Aerosurface Servoamplifer (ASA) channel 1 fault – are still up for debate ahead of STS-127’s launch rationale being approved.

Endeavour is now set to move from Pad 39B to Pad 39A on Sunday morning, so as to avoid poor weather that has been forecast in the local area – leaving managers with “low confidence” of making the current June 13 No Earlier Than (NET) launch date, due to the lack of contingency days in the flow.

“If roll to Pad A doesn’t occur this Saturday, KSC has low confidence in making June 13th launch,” noted minutes from the STS-127 SSP FRR on L2. “Should have good assessment for Agency FRR. LRO (Lunar Reconnaissance Orbiter) is scheduled to launch on June 17th, resulting in a potential range conflict from 6/16-6/19. The beta angle cutout begins on 6/20 through 7/11.”

As a result, a NET June 13 target – which remains the launch date until KSC Launch Operations request a slip of one day due to the delay of Endeavour’s move to 39A – will have three launch attempts before standing down for LRO’s launch due to range requirements. Should LRO fail to launch within its window, it would likely result in STS-127 moving to July.

Engineers are busy working pre-rollaround requirements ahead of the weekend, with the hope of finding schedule solutions to allow for the June 13 target to be achieved. The main focus of late has been on Hyper Load/Adjustments and Ordnance Disconnects, following the standdown from her Pad 39B STS-400 LON (Launch On Need) requirement.

“S5009, Ordnance disconnect in preparation for roll to Pad A will pick up today following completion of propellant loading operations. S0038 preps for roll-around to Pad A begin today.”

Managers worked through around 30 presentations – main, back up and revisions – at the SSP FRR. All FRRs include the IFAs from the previous mission, but due to the close proximity of the servicing mission to Hubble and STS-127, the STS-125 IFA review was completed prior to Atlantis landing in California.

This achievement allowed for a complete FRR overview to be presented even prior to Atlantis’ return to her Orbiter Processing Facility (OPF).

Ironically that milestone has become one of the main areas of interest on the timeline, as engineers await instructions on whether they are required to check the wiring on the orbiter – which can only be carried out in the OPF – to find a root cause to the ASA-1 failure, and thus ensure the same issue won’t arise on Endeavour.

“All organizations polled go pending open work/issues and go to hold the Agency FRR on 6/3 (0800 at KSC). As expected there was significant discussion on whether OV104 (Atlantis) wiring inspections are required prior to STS-127,” added the FRR minutes/review.

“Most in the community do not consider this a constraint since wiring inspections for OV105 (Endeavour) were completed while they were not for OV104 and KSC has demonstrated processes to mitigate wiring damage caused during processing.

“No decision was made as to whether they are required but the plan is to perform inspections as soon as the vehicle is back in the OPF (estimated to begin around the weekend of 6/6).”

Even if inspections are called, it is unlikely such a decision would lead to a delay to STS-127, unless a serious issue was found on Atlantis.

The main body responsible for the systems, the Orbiter Project Office (OPO), noted they do not feel the ASA-1 issue is a constraint for STS-127, although some engineering bodies remain unconvinced and voted in favor of the inspections being carried out on Atlantis upon her return to Florida.

“Most likely cause for ASA1 failure is an external wiring short. Orbiter’s position is that this anomaly is not a constraint to STS-127 since OV105 (Endeavour) baseline wire inspections were completed for OV105 but were not for OV104,” added the notes. “Inspections of OV105 wiring are predicted to start about the weekend of 6/6 assuming the ferry flight departs EDW around Sunday (currently the schedule).

“There was significant discussion on whether the OV104 wiring inspections should be a constraint to STS-127. Most felt the OV105 wiring inspections and the processes KSC implemented for mitigating wiring damage were sufficient. However, the community is not in complete agreement.

“No decision was made as to whether OV104 wiring inspections are a constraint to STS-127 – (Shuttle Manager John) Shannon polled several orgs to determine where the community stands.”

Managers will meet again at Friday’s “noon board” to make a final decision on whether the wiring inspections on Atlantis will take place, before the subject is discussed further at the Agency FRR next week.

UPDATE: Inspections required, and have already started at Dryden. The Ferry flight is now slightly delayed to a Monday depature due to poor weather that had delayed the installation of the tail cone around Atlantis’ aft. Full story on Altantis’ status will be published in the next article. 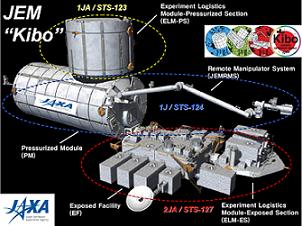 Inspections are already being carried out on Endeavour’s JAXA payload, following two events of interest that made a revision of the SSP FRR Payload overview presentation.

“Payload processing reported two late breaking Problem Reports. One was for a lightning strike event that had no impact and another for water intrusion into the 2JA payload element while in the transportation canister,” noted the SSP FRR overview notes.

“The evidence indicates that driving rain entered the canister through the positive pressure relief vent. They are not anticipating an issue for flight but are proceeding with inspections, drying, cleaning as necessary.”

The Payload revision itself outlined the two events in greater detail, starting with the lightning strike in the Pad 39A area, where STS-127’s payload was installed into the Payload Checkout Room (PCR).

“ISS-2JA/STS-127 payload elements were in the payload transportation canister on the Pad A surface at the time of the strike – canister ECS system (on shore power) continued to operate nominally after the strike. Strike was not observed/detected by OTV, the Catenary Wire Lightning Instrumentation System (CWLIS), or the Ground Lightning Monitoring System (GLMS) magnetic field sensors.

“Electromagnetic Environmental Effects (E3) Team preliminary calculations indicate that the magnetic field from this strike was 10 amperes/meter. (Requirements documentation) requires that ISS hardware be capable of withstanding fields of 40 amperes/meter when protected by facility or other structures

“Use “as is” disposition being coordinated with element/ORU providers.” 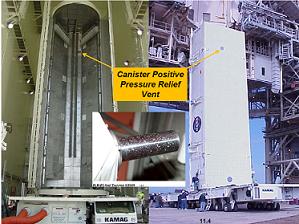 The second issue, relating to a minor water intrusion into the payload canister, is also being inspected. This too is unlikely to become an issue for the flow towards launch.

“Evidence of water intrusion was detected on the 2JA payload elements following transfer from the transportation canister to the Payload Ground Handling Mechanism (PGHM) on 5/24/09,” added the SSP FRR Payload presentation.

“With the exception of approximately one ounce of liquid water discovered in a grapple fixture bracket pocket on the ICC-VLD, all evidence consists of “water marks” left by evaporated water droplets. Water marks can be observed on the keel trunnions (see photo) and adjacent structure on all three elements

“Water is theorized to have entered the canister through the positive pressure relief vent (see photo) during driving rain conditions on 5/22- 23/09. All elements will be inspected, dried, and cleaned, as necessary

“Use “as is” rationale is being coordinated with element/ORU providers.”

Several other items of interest from the STS-125 IFA made the SSP FRR for STS-127.

Debris related incidents on the External Tank (ET-130), the Tail Service Mast (TSM) T-0 Umbilical – similar to STS-126 – and what is being classed as a large post ascent foam loss event on the RSRM (Reusable Solid Rocket Motor) stiffeners, all made the FRR. None of the items are being deemed as a constraint to STS-127’s launch.

The above items will be outlined in details via upcoming articles.