STS-125 is pressing through EOM (End Of Mission) activities, following the successful testing of Atlantis’ flight systems by the flight crew on FD11 ahead of the return home. With the Thermal Protection System (TPS) cleared for entry, Atlantis was hoping to land on one of two opportunities in Florida, before both attemtps were waved off.

FLASH: First and second landing opportunities waved off due to weather. Extended loss of communications with Atlantis due to failure of TDRS 171 communication and data relay satellite. Refer to live update pages, linked below. New article pending.

EOM-1 checkouts of the orbiter Flight Control Surfaces (FCS) and Reaction Control System (RSC) thrusters allows for troubleshooting over a day prior to the scheduled deorbit burn. Atlantis passed the checkouts without issue, using Auxiliary Power Unit 3 (APU) for the tests.

Photo/TV ops were also added to STS-125’s checkouts, in order to check for any liberated debris. It was during STS-124 when a liberated Rudder Speed Brake (RSB) tab was seen departing the aft of the vehicle, identified thanks to the quick actions of the crew in taking good quality digital images of the debris before it left the field of view.

“The FM television system is also verified when live TV is planned for entry (i.e. pilot point-of-view camera),” which references the HUDs (Heads Up Display) video feed usually seen on NASA TV near landing, as opposed to the digicam video of the crew from the deorbit burn to landing, which is downloaded from the camera at a later date (several 2hr videos of which are available on L2).

A similar camera – in a fixed position on the flight deck – is also used for ascent, although STS-125’s launch video was apparently lost when the video failed to download to the ground after reaching orbit. However, that video has been salvaged, after a replacement cable allowed for the download to work.

“MER-04 (Update): Ascent Mini-Cam Video – crew reported good video with replacement cable,” noted the Mission Evaluation Room (MER), which only had two additional notes to make for Flight Day 11, one of which related to a minor issue with work light, which required recharging, and the other noting signal link issue with the Ku Band.

“Ku Band Forward Link AGC Unexplainable Changes: Seeing changes in the AGC (signal strength) when radiating and using PL MAX (Ch 3),” the MER report added. “Ku is still operational. Looking back at past missions, has been seen before, but more noticeable/frequent this flight because of the TDRS 046 weaker signal and the more active use of PL MAX.”

The Ku Band Antenna itself will be stowed late in the flight day, as cabin stowage continued ahead of Friday’s opening landing opportunities.

“KU STOW: Schedule the day before landing. Scheduled the day before entry to protect for an EVA to stow the antenna if it becomes stuck,” added the flight plan walkthrough. “MADS POWER-ON- Scheduled on EOM-1 to power on the system. The Modular Auxiliary Data System (MADS) measures and records data from various sensors. Ergometer Stow.

“LiOH Swap out any 6 used LiOH cans from MD52M with the unused cans from the Ext A/L Floor Bag. Wanted those unused cans out of the A/L before the crew can’t get back to them anymore. POST EVA ENTRY PREP- Configure EVA equipment and airlock for entry. Entry Cooling Config – In Presleep

Atlantis has performed extremely well during her flagship mission to the Hubble Space Telescope, with only a handful of issues – all holding no mission impact. Most notable was the Aerosurface Servoamplifer (ASA) channel 1 failure – which gained the largest amount of MMT attention (article on Friday outlining the MMT presentations).

The only notable item engineers have been keeping an eye on relates to Atlantis Fuel Cell 1, which registered a voltage increase and thus requires further monitoring during the flight. Again, this holds no mission impact in its current state.

“Fuel Cell 1 Substack Delta Volt Increase: During each purge on FC 1, the substack 1 delta voltage reading has increased. After each increase, the reading decreased slightly but not back to the same value it was prior to the purge. Currently the substack delta volts reading is at 32, a total increase of 26 from its prelaunch baseline value of 6 mV,” outlined the MMT.

“Per Flight Rule A9-59, Fuel Cell Performance, a delta increase of 50 mV requires a bus tie and FCMS data takes. However, the signature is consistent with port plugging within some of the cells in fuel cell 1 substack 1, and therefore do not need to perform the actions indicated in flight rule. Similar signature seen on STS-56. Small performance loss on Fuel Cell 1. EGIL continues to monitor and no impact expected.” 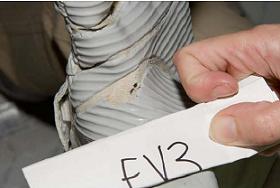 The MMT also outlined the cut suffered by Mike Massimino (EV3) left EMU glove during EVA-4. While an EVA termination scenario was called for when the cut was spotted during a routine glove check, Flight Rules had already pre-empted the potential of a cut glove during two specific EVA tasks on Hubble. This allowed Massimino to continue with the rest of his spacewalk.

“EVA 4 Glove Tear: During glove inspection at completion of STIS repair task, EV3 reported a tear in the l h f h cloth of the palm region of his left glove that looked like a hole in the cloth (Vectran), resulting in a Terminate EVA scenario,” noted the MMT via one of their presentations.

“Per FR 125, A15-11, CUT GLOVE TERMINATE EXCEPTIONS, Item 5: If during STIS or ACS Task: The affected crewmember may assist with worksite cleanup activities such that the HST is in an operational and deployable configuration prior to terminating the EVA.”

“Suit pressure was stable and the crew was beginning cleanup. EV3 assisted with +V2 door closure and configuring the BAPS to put the HST in a deployable configuration and then translated to the A/L (Air Lock).

“From the time of the last satisfactory glove inspection report, tear likely occurred during the STIS Card R&R or STIS Closeout (1:15 window). EV3 is not scheduled for further EVAs. If he needed to perform EVA 6 for HST Deploy, he would have used his backup pair of gloves.”

Friday remains the target for Atlantis’ return home, pending the weather, with only KSC called up at present for two opportunities. The option to include Edwards as a landing opportunity on Saturday will be assessed if the Florida outlook shows no sign of improving.

“Agree with MOD’s plan to just target KSC only on Friday, will monitor the weather and see when it is correct to call up EDW,” added MMT chair Leroy Cain. “STS-400 LON crew released from quarantine given the DAT (Damage Assessment Team) clearing the vehicle. KSC can stop at the correct hold point for the count for a vehicle standpoint”.

Endeavour remained in a launch countdown posture this morning, holding at the point of PRSD (Power Reactant Storage and Distributation) loading in the S0007 Launch Countdown – although it would now take a freak accident on orbit for Endeavour to launch on her rescue requirement, following the clearance of her TPS and FD11 checkouts.

“The MMT concurs with the DAT (Damage Assessment Team) assessment that the TPS and vehicle are safe for de-orbit entry and landing. Based on that assessment, MMT direction was given to insert a 24 hour hold in the STS-400 LON launch countdown,” noted the MMT.

“The countdown is holding at the standard T-27 hour built-in-hold (prior to PRSD load) pending further direction from MMT.”

However, later in the day, KSC engineers were told to officially standdown from STS-400 requirements, which technically moves Endeavour into pre-STS-127 pad flow preparations. She will be rolled over from Pad 39B to Pad 39A on a scheduled determined by pad repairs on 39A – with further information and images of the repairs on L2, with an article to follow at the weekend.