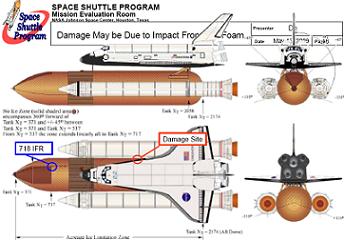 Atlantis has landed at Edwards Air Force Base on EOM+2 (End Of Mission plus two days), after Entry Flight Director Norm Knight decided the weather at the Kennedy Space Center had failed to improve to acceptable levels. Atlantis will return to KSC on top of a Shuttle Carrier Aircraft (SCA) just a few weeks ahead of the launch of her younger sister, Endeavour.

Four landing opportunities were available to Atlantis on Sunday, two at KSC and two at Edwards’ Dryden Flight Research Facility. White Sands was due to be called up on Sunday, before wet conditions on the lakebed landing site ruled out the New Mexico option – which is the third primary landing option.

Knight decided to give a go for Payload Bay Door closure ahead of the opening opportunity at the Kennedy Space Center (KSC), followed by the donning of the entry suits by the crew, and the orbiter transition to the entry software mode of OPS3. However, the opening landing option was waved off due to “dynamic” weather.

With the second and final KSC opportunity still not in an acceptable weather pattern, Mr Knight made the call to bring Atlantis and her crew back to Earth for a landing at Edwards.

A small issue with elevated pressure on drain line in APU 2 (Auxilary Power Unit) – noticed shortly after the completion of the deorbit burn – was not classed as a problem, and is within limits.

A perfect re-entry was followed by a super smooth landing on Runway 22 at Edwards, where she will now undergo around a week of deservicing, ahead of flying home to Florida on top of the SCA.

Meanwhile, the nature of Atlantis’ relatively issue-free flight was emphasized via the mission’s IFA (In Flight Anomaly) review, which was carried out shortly after departure from the Hubble Space Telescope, as opposed to a week or so after landing.

The need to carry out the IFA review earlier than normal relates to the timeline for the Flight Readiness Reviews (FRRs) for Endeavour’s STS-127, which is launching just a month after Atlantis’ ride uphill.

The main focus of the IFA review concentrated on the foam liberation from Atlantis’ External Tank (ET-130), which lost a notable amount of foam from an LOX Ice Frost Ramp (location Xt714) ahead of SRB (Solid Rocket Booster) separation.

Although the liberated foam hit Atlantis’ starboard Chine area of the orbiter, the resulting damage was minor. However, the timing of the foam shedding is of a concern and may have breached risk assessment parameters, which would result in an elevated subject for discussion at STS-127’s FRR.

“Came out with four IFAs and one pending associated with release of foam from the IFR (Ice Frost Ramp) and possible connection to the chine damage,” noted JSC’s SE&I department (L2).

“Originally thought that was within risk assessment, but based on review, it may not be. Will bring this forward. Whether this is an IFA or not, will bring the story to FRR.”

The only other items of interest relating to STS-127’s FRR, are the cut glove from EVA-4 and the Aerosurface Servoamplifer (ASA) channel 1 issue suffered by Atlantis.

“On STS-125, there is interest in getting hands on the EVA tools and some instrumentation in the cargo bay involved in the EVA 4 cut glove,” added Flight Operations & Integration (L2).

Endeavour is on a very tight processing flow, with her move from Pad 39B waiting on repairs to Pad 39A’s SRB flame deflector, which suffered from damage during STS-125’s launch.

“Pad A turnaround activities are going well, repaired high pressure lines, took X-rays, will continue with this and do sampling,” added KSC’s Ground Operations (L2). “On SRB flame deflector, are continuing with repairs. Will apply fondue Fyre next week.”

This, along with the ASA-1 issue on Atlantis, in addition to retorquing of two windows on Endeavour, are currently the only pre-FRR topics being discussed by the Orbiter Project Office (OPO).

“Had OPO pre-FRR for STS-127. Don’t have any special topics now. Don’t feel ASA-1 issue is constraint for STS-127, but will need to check OV-104 (Atlantis) after landing to see if have problem with wiring in box, in aft or where wiring issue is,” the JSC body noted (L2).

“Must work on Vespel fastener relaxation issue for STS-127; have new installations on windows 1 and 6, collected data and did some testing. Team recommended that windows 1 and 6 be retorqued on STS-127 before flight.

“Working on that with GO; realize schedule is very tight as roll over from pad B to pad A. Also looking at whether can fly with that. Discussed late breaking ISS (International Space Station) request to provide iodinated water on STS-127 and other flights.”

Discovery is deep in STS-128 processing inside OPF-3 (Orbiter Processing Facility), with the milestone of booster stacking set to begin on May 28th. The orbiter herself is awaiting the return of her Forward Reaction Control System (FRCS) and right hand OMS Pod, the latter requiring a repair on an attach bolt.

“Continuing processing in OPF-3. In HMF (Hypergolic Maintenance Facility), installed FRCS thrusters; they were mated and backfilled; will continue with closeout activities; plan to deliver pod back to OPF at end of this month.

Targeting launch for No Earlier Than (NET) August 6, 2009, Discovery will be prepared for a 13 day, 3 EVA, which includes the first flight of the OI-34 Flight Software and the last scheduled ISS crew rotation to be undertaken by the Space Shuttle Program (SSP).