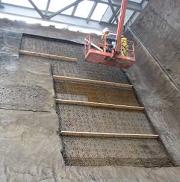 Following the early wave off of two landing opportunities at the Kennedy Space Center (KSC) on Friday, Atlantis and her STS-125 switch their attentions to four opportunities on Saturday, which includes two options for landing at Edwards Air Force Base. Meanwhile, Endeavour is being prepared for her move to Pad 39A ahead of STS-127, pending repairs to the SRB flame deflector.

With STS-125 now in EOM (End Of Mission), two landing opportunities were set up for Atlantis’ return to KSC on Friday. However, the weather over Florida proved to be so poor that the entry procedure never passed the point of switching Atlantis’ radiators to the Flash Evaporator System (FES) – which is one step ahead of the closure of the Payload Bay Doors.

The Flight Day still proved to be slightly eventful, with the TDRS (Tracking Data Relay Satellite) 171 failing for a short time during the morning, threatening a loss of communications for over 30 minutes, before the satellite – ironically launched by Atlantis on STS-43 – kicked back into life.

Entry Flight Director Norm Knight asked commander Scott Altman to “cycle the control handle” – before “Scooter” responded, “I understand that’s the handle on the commode,” breaking down the request to the requirement to flush the onboard toilet. “What else could I call it,” Scooter responded as laughter was heard over the flight loop.

Another valve on Atlantis proved to be the only additional note on the Mission Evaluation Room (MER) report log since Flight Day 11, relating to the closeouts of the Airlock ahead of re-entry.

“Airlock Starboard Negative Pressure Relief Valve Locked On. The crew reported they were unable to remove cap per procedure,” noted MER, who have only worked around 18 minor issues throughout the mission. “No impact to flight/entry/landing.”

Saturday will see Edwards Air Force Base (Dryden Flight Research Facility) being called up for landing opportunities, although KSC will remain – as always – as the primary landing site. A landing in California adds around a week to her post launch flow, before being ferried back on top of the Shuttle Carrier Aircraft (SCA).

White Sands will be added to the landing sites on Sunday.

More will follow – refer to live update pages linked above for up to the second live reports.

Endeavour, officially stood down from her STS-400 LON (Launch On Need) requirement, is now in STS-127 flow operations. Endeavour will be moved off Pad 39B for a rollaround to the vacated 39A for her launch on June 12.

The date Endeavour will be transferred to Pad 39A remains undecided, with repair work continuing on the damaged SRB flame deflector – inflicted when Atlantis launched on STS-125 – which is still waiting on a new application of fondu fyre refractor concrete over the exposed area of the trench.

Currently, first motion of the STS-127 stack is scheduled for Friday 5/29 (2nd shift), with hard-down at Pad 39A on 5/30 (3rd shift). This schedule will be refined, based on the progress of the pad repairs.

Endeavour is currently being secured from her launch countdown (STS-400) operations ahead of the pad switch, which will see her rolled back off Pad 39B, down the crawlerway to the fork between the two pads, before being moved forward on to Pad 39A.

“Aft platform installations are in work, Aft gas samplers are safed and removal is in work. Pad ARCS rain cover removal and UTPA installation is on hold due to weather.” 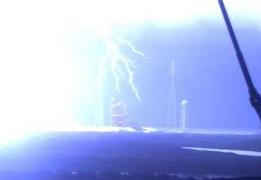 The poor local weather also resulted in several days of lightning strikes being registered at Pad 39B, which also received the STS-127 payload on Friday morning. None of the lightning strikes affected Endeavour’s electrical systems.

“Two lightning strikes within 0.33 nautical miles of Pad B. The ERB (Engineering Review Board) recommendation that no additional retests were required since there were no indications of concern to the vehicle or ground systems. The data will be formally presented to the Program Requirements Control Board (PRCB).”

“Pad A: S0600 Payload Ops: STS-127 payload arrived to Pad at 02:00 EDT this morning,” added Friday processing information. “The payload canister is positioned under the PCR (Payload Changeout Room) and ready to lift as soon as there is a break in the weather (ETA 19:00 local).”