Atlantis’ TPS in good shape as she hooks up with Hubble 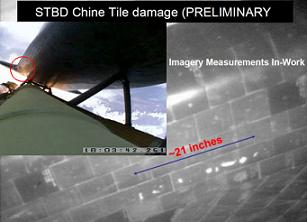 With the debris strike on Atlantis’ starboard chine Thermal Protection System (TPS) –  now confirmed as a liberation from an Ice Frost Ramp on External Tank (ET-130) – cleared within hours of its observation via the Orbiter Boom Sensor System (OBSS), the orbiter and her STS-125 crew have completed rendezvous operations with the Hubble Space Telescope on Flight Day 3. As of Wednesday, all areas of evaluated TPS – including critical areas such as the OMS Pods – had been deemed to be in an acceptable condition.

No additional anomalies of note have been recorded by the Mission Evaluation Room (MER) since Flight Day 2, allowing engineers to concentrate on evaluating the root cause of the Aerosurface Servo Amplifier (ASA) failure during ascent.

At present, the single channel failure of the quadruple tolerant system has no mission impact. However, a second failure would cause the mission to end – with a landing on the next available opportunity. A second ASA failure is highly unlikely.

Regardless, a Tiger Team level investigation is ongoing, with engineers looking at historical data and engineering records on the ASA system. It is normal for such investigations to be called – especially during a relatively issue-free mission – in order to utilize the large engineering community, gathered for mission support, to build a stock of additional data on the hardware, via what is known as “lessons learned”.

The other main issue of note relates to the troublesome ET Umbilical Well camera system, which appears to be a fleet-wide issue. Several efforts to download the images have failed, although 46 images of the separated tank are available to the crew, and will be assessed once Atlantis returns home.

“Crew reported that there are 46 images on the camera as expected. Images can be obtained from the memory card post-flight. The team will assess available time at the end of FD2 to see if a follow-up attempt to download these images is possible to support the damage assessment process.”

In other news, the Solid Rocket Booster Retrieval Status lists that: “Dive operations were completed successfully yesterday (Tuesday). Both boosters are under tow; Liberty Star and Freedom Star are expected to dock this morning at 0800L and 1100L respectively. Open assessment is scheduled for tomorrow at 0700L.”

Meanwhile, the damage sustained by Pad 39A during Atlantis’ launch will not delay STS-127’s schedule – with Endeavour due to transfer from Pad 39B to 39A after STS-400 LON (Launch On Need) standdown, for her STS-127 mission next month.

“Post-launch pad securing operations, wash-downs, and walk-downs are proceeding as planned,” added processing information on Wednesday. “The team is continuing to evaluate pneumatic lines that were impacted by liberated Fondue Fyre. Initial reports indicate that the pneumatic lines can be replaced in less than a week and should be no issue for turnaround operations.”

The images will likely confirm the current theory that the debris strike on Atlantis originated from one of the ET Ice Frost Ramps (IFRs), although this can be assessed post-mission, after it took just several hours for the DAT (Damage Assessment Team) to clear the line of TPS ‘dings’ caused by T+102 seconds (estimated) event.

The damage was observed during the OBSS inspections on Flight Day 2, although at no point were members of DAT concerned with the initial observations, including it only as a note of interest in their general first look overview.

“DAT Status: Did see some indications of damage on starboard chine (21” long skip down several tiles) in FD2 inspection imagery. No issues noticed for T-0 or lower surface, but data review is in work.

“There were two indications from the wing leading edge sensors during ascent on the starboard chine that appear to correlate to available imagery for a noted debris event around the 106 second mark. FD2 inspections identified approximately 4 tiles in the area with dings. The tiles in this area are approximately 2.5 inches thick.” 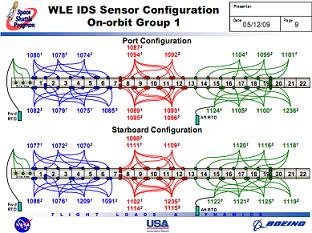 The system is so sensitive, ‘ghost triggers’ can be registered throughout a mission via thermal conditions interacting with the orbiter’s hardware.

It was the WLE IDS sensors that likely ‘felt’ the debris impact on the chine area of Atlantis’ starboard WLE, the first of which was timed at T+104.3 seconds, measuring at 2.9 Grms – which is still a low reading, with only readings over 10 Grms usually deemed as the benchmark for an impact of concern.

The second was timed at T+120 seconds, measuring only 1.8 Grms, immediately adding confidence that the impacts were unlikely to be of a major concern.

“All WLE IDS ascent summary data were down linked and downloaded successfully,” noted the WLE IDS presentation to the MMT, available on L2. “Thirteen (13) half second windows of detailed G time histories were downloaded in order to confirm the implication of cases above 1 Grms. There are no reportable indications on the RCC. However, two (2) indications were identified on the starboard chine area.

“Overall, STS-125 background levels are very similar to background levels of previous missions. No data anomalies have been identified. All units triggered on Main Engine Ignition within 0.15 seconds of each other.” 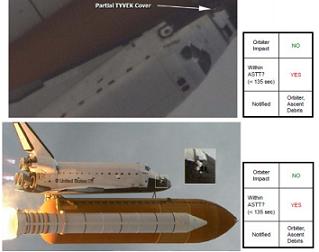 The only other item of interest via ascent imagery related to a couple of late releasing Tyvek Covers – used to protect the Reaction Control Systems (RCS) thrusters from water and debris intrusion during the pad flow. This is also not an unusual issue, and is only noted as late releases have a small amount of potential to become debris hazards at high velocity.

The covers are designed to liberate from the vehicle within seconds of launch, however, during STS-125’s launch, a small piece of cover remained attached to the F4D thruster, before liberating later in ascent. It failed to impact the orbiter.

“The estimated size of each piece is ~2 grams, which within accepted limits. Imagery indicates that the pieces that released late did not impact the Orbiter.”

Flight Day 3 (FD3) Overview (refer to live updates for up to the second coverage): 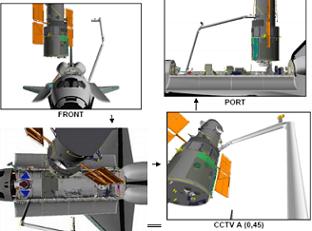 During what will be an historic day for the space program, Atlantis will mark the final time an orbiter will rendezvous with the Hubble Space Telescope.

The Flight Day will consist of the rendezvous, HST’s Solar Arrays positioned for grapple by Atlantis’ RMS, HST grapple and berth on Flight Support System (FSS), the Shuttle Robotic Arm survey of HST, and an EVA 1 procedure review.

Pre-empting her arrival, the Space Telescope Operations Control Center (STOCC) at Goddard are finalizing their preparations of the Telescope for the start of its re-servicing.

“Ground Commanding: The STOCC performs several steps to prepare HST for rendezvous and berthing with the orbiter,” noted FD2 to FD3 outlines on the Flight Plan Walkthrough (L2).

“The STOCC maneuvers HST to a rendezvous attitude designed to maintain HST power and minimize plume loading on the solar arrays (SA’s) at the 1500 foot normal Z braking gate.

“This attitude is determined by the conditions as follows: Sun in the V1-V3 plane and +V1 pointing down the R-bar at an orbit angle of 59 deg before orbital noon.

“The STOCC slews the solar arrays to 90 degrees, to provide clearance with RMS. The orbiter approaches HST using an R-bar approach to minimize prop usage and potential contamination.” 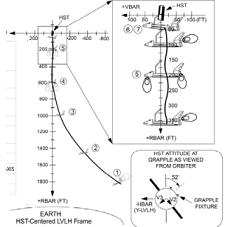 The orbital ballet between Atlantis and Hubble will see the orbiter approach HST from below, rising up the R-bar, ahead of capturing Hubble via the Shuttle RMS.

“Before the orbiter is within 200 feet of HST, HST performs a roll maneuver to the capture attitude to align the +V2 grapple fixture on HST with the RMS. The roll mnvr will place the -V3 52 degrees out of plane north as measured on the anti-Sun side of HST.

“The magnitude of the roll mnvr is ~ V1 = Beta – 52 degrees, resulting in a roll that ranges from 0 deg to -104 degrees. Orbiter then performs an inertial approach.

“HST Approach & RMS Capture/Berth Operations: The RMS is used for grappling and berthing the HST in the orbiter payload bay. Grapple is timed for sunset + 5 minutes. RMS HST maneuvering is done with Orbiter in freedrift.”

Hubble will then be secured on the FSS at the aft of the Payload Bay, latched into place for an imagery survey of the telescope, ahead of the of the EVA work that will result in Hubble’s life span being extended well into the next decade.

“Photo/TV05 Survey (-V3) via RMS and P/TV. Battery Charging – one full daylight pass. Solar Array Slew to 0 degrees in preparation for EVA 1 on FD4. Array’s are slewed after completion of battery charging and maneuver to overnight attitude (–ZLV –XVV).”

EVA-1 will begin on Flight Day 4, conducted by John Grunsfeld and Andrew Feustel – the first of five planned spacewalks during STS-125. Preparations have already begun for the opening EVA.

“As expected, the BATT V DECAY message was received after FAN start up on the 3 EMUs with new ICBs installed (s/n 2080-2082). The battery team has observed this signature for the new ICBs during initial cycles & determined this to be nominal.

“Cabin has been depressed to 10.4 PSI in preparation for the upcoming EVAs.”