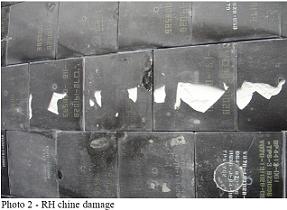 Post flight processing on Atlantis at Edwards Air Force Base (Dryden Flight Research Center) has set an early target of the end of this weekend for the start of her trip back to Florida on top of a Shuttle Carrier Aircraft (SCA). The team of engineers working on safing the orbiter ahead of her mating with the SCA have also reported very little damage to her Thermal Protection System (TPS).

Following her highly successful mission to the Hubble Space Telescope, Atlantis was towed off runway 22 at the Californian facility and taken to the Mate/Demate Device (MDD), which cares for the orbiter’s during their stay at Dryden, and also provides the cranes to lift the orbiter on top of the modified 747 SCA – which is currently scheduled for completion on Sunday.

“Post Landing Ops completed: Total downgrade and handover were completed at 1256 local. Orbiter tow-in ops to the MDD were completed at 2345 local,” noted processing information on L2, adding the only problem that has occurred during the flow thus far related to a power outage.

“Facility power went off line. Power to MPUs (Main Power Units) was lost so Orbiter powered down. EASC (DFRC support) is working the problem, which appears to be a Circuit Board issue. Ground Power has reconfigured the MPUs so that Mains B and C are tied to the MPU that is not fed by the reworked breaker.”

Despite extensive pre-launch debris risk assessments carried out by shuttle managers, Atlantis has arrived back on Earth with hardly any TPS damage of note.

Although the full assessment of the TPS will be carried out once she’s spotted back in her Orbiter Processing Facility (OPF), another assessment outlined all the areas of interest found so far, which also proved to be a positive report.

The one of the main areas of interest related to the starboard Chine damage – caused by an impact from a foam liberation event via the one of Atlantis’ External Tank (ET-130)’s Ice Frost Ramps (IFR) – which appears to mirror its appearance via on orbit photography during inspections.

This was predicted to be the case by the excellent DAT (Damage Assessment Team) that took just a few hours to correctly clear the area in question for re-entry.

“TPS assessment began at approximately 9:54 am PDT. Overall the vehicle looked good. Approximately 10 tiles had damages greater than 1.0 inch. (six were in the right hand chine cluster). There were no protruding Ames gap fillers identified,” noted the TPS assessment presentation on L2.

The other item of interest related to RCC (Reinforced Carbon Carbon) panel 11R, following an indication – or trigger – via the WLE IDS (Wing Leading Edge Impact Detection System) of an impact on the surface of the panel. However, post landing photographs show no sign of an impact, or damage.

“Visual inspection of RCC Panel 11R (which had registered an on-obit impact indication) revealed no evidence of damage,” added the assessment presentation, which leads to the possibility the indication was caused by what is known as a “ghost trigger”, where the slightest movement of orbiter hardware on orbit can register on the ultra sensitive system. 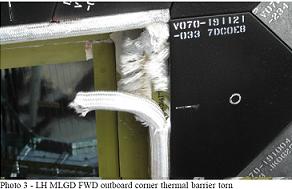 “NLGD thermal barrier on the right side approx 2/3 back had several minor discolorations (potential flow paths) that extended onto the pressure seal.”

“Aft Right hand ET (External Tank) door, forward thermal barrier, had signs of minor flow originating at the center of the door,” the assessment presentation continued. “Underlying Koropon was also discolored. Corresponding discoloration was seen on the door side fingers and tiles. Flow appeared to start at the center of the door and travel outboard. No environmental seal damage was observed.

“No piano key tiles were observed broken, however one tile under the left engine was deflected downward. Vertical tail tile, just above the rudder speed brake, had a damage approx 2” x 2”. Depth unknown. 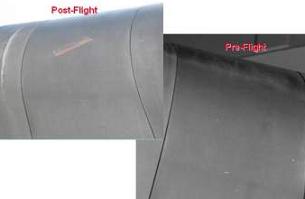 One unusual area of interest was found on RCC Panel 7R, with a red/orange residue clearly seen on one post landing photograph. It is not know where the residue originated from, with no sign of work being carried out on the panel during pre-launch processing.

The heat of re-entry is understood to have caused the marking to appear – potentially caused by a piece of tape that may have been applied to the panel at some point during it’s pre-launch flow – although it held no threat to the integrity of the panel during the return back to Earth.

“RCC Panel 7R had red/orange residue near the apex, approx 4” long,” noted the assessment presentation, which listed several other area of interest, all deemed as minor.

Now the mission is complete, managers have been looking over the IFA (In Flight Anomaly) review presentations (12 available on L2), as they gear up towards the next mission, STS-127, which is scheduled to launch on June 13. However, for now, the shuttle team have been congratulating key members of the flight control room for their fine work on the hugely successful mission.

“Norm Knight and his ascent team set the tone on launch day. The awesome work of the training team and flight control team was illustrated during ascent when Booster/Ed Turcotte and GNC/Mike Hamilton responded to anomalies in their systems with such calm professionalism!

“Tony Ceccacci and his orbit team continued the theme of MOD excellence as they successfully executed the mission objectives to ensure Atlantis was safe for entry and to give new life to the Hubble Space Telescope.

“With uncooperative weather at KSC, the mission came to a safe and successful conclusion on Sunday with an Edwards landing at 10:39 central.

“Congratulations to all those whose hard work and dedication contributed to such a successful mission.”