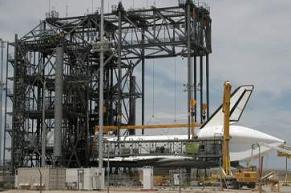 The high tempo pace of shuttle processing continues through the weekend and earlier into next week, with Atlantis’ departure from California on top of the Shuttle Carrier Aircraft (SCA) set for Monday and Endeavour’s pad swap on Sunday morning. Endeavour will be arriving at a Pad 39A that has undergone several repairs, following damage sustained during STS-125 launch.

The SCA/Atlantis duo were set to leave California on Sunday, before a couple of weather related delays in the flow forced managers to change the schedule on Friday night, with departure from Dryden moved to no earlier than Monday.

It was the unusual occurrence of storms in the desert region where Atlantis landed at the conclusion of STS-125 that interrupted the timeline for the installation of the tailcone that surrounds the orbiter’s aft hardware to reduce drag during the piggyback journey across the States.

The removal of the support structure – used for the mating of the tailcone to the orbiter – was also slightly problematic, due to tight clearance margins between the structure and Atlantis’ body flap. Final work involved the retraction of the landing gear and the closure of the associated doors.

This marked the end of hydraulic operations and tailcone installation work, with Atlantis scheduled to be raised on the MDD (Mate Demate Device) at 8am (local time) on Sunday, before the converted 747 takes its position below the orbiter at 10am. The rest of Sunday will be dedicated towards the mating of Atlantis on top of the SCA.

This will be followed by the Ferry Flight Readiness Review (FFRR), which will also plan out the route the SCA/Atlantis duo will take over the mainland United States, resulting in an arrival back at the Kennedy Space Center (KSC) – depending on weather – sometime on Tuesday. Refer to the live coverage pages for updates.

Other work that has taken place during Atlantis’ Californian vacation includes the removal of her GH2 Flow Control Valves (FCVs), which allowed for delivery to the valve’s contractor, Vacco, to be checked for any cracks that may have been suffered during Atlantis’ launch.

“In support of OV-104, the FCVs will be hand-delivered to the vendor. Once there, they will go through eddy-current testing,” noted the latest Shuttle Standup/Integration report on L2, although it has been noted that ascent data pointed towards no issues with the valves during the STS-125 ride uphill.

Earlier in the pre-Ferry flow, engineers also took the opportunity to begin testing of the Aerosurface Servoamplifer (ASA) wiring, following the failure of one of the four channels on STS-125 – caused by the noise of Space Shuttle Main Engine (SSME) ignition.

“The DFRC (Dryden Flight Research Center) team has been directed to perform ASA #1 (IPR 129V-0002) troubleshooting,” added processing information. “The plan was to take resistance measurements on the orbiter wiring and into ASA #1. The vehicle was then reconfigured for ferry flight.”

Further testing will take place inside the Orbiter Processing Facility (OPF) once Atlantis has returned to KSC, which will hopefully result in additional data for STS-127’s flight rationale when managers meet for the Agency Flight Readiness Review (FRR) next week.

Atlantis is departing at 8am local time on Monday and heading to Biggs, Texas on the first leg of her journey.

Back at KSC, Endeavour swapped pads from 39B to 39A, which will mark the end of shuttle operations at 39B, prior to being turned over for the Ares I-X launch (date remains under review). Endeavour had taken vacancy of 39B for the STS-400 LON (Launch On Need) requirement in support of STS-125.

Now in a tight flow towards the STS-127 launch date, Endeavour was backed out of STS-400 processing, which involved the removal of the ordnance, to be reinstalled once she’s on Pad 39A. However, a large amount of STS-400 pad flow work already conducted on the stack, which removes around two weeks of processing from the STS-127 flow on Pad 39A.

“S0024 Prelaunch propellant servicing was completed. S5009 Ordnance disconnects in preparation for roll to Pad A completed. S0038 preps for roll-around to Pad A began Thursday. First motion to Pad A is now planned for 0001 hrs on Sunday,” noted processing information on L2.

“S0017 Terminal Count Demonstration Test has been rescheduled to Wednesday/Thursday next week to provide additional time to complete the above work. Preparations continue at Pad A for OV-105 (Endeavour) rollover/rollaround, currently scheduled for Sunday.”

The scheduled start time for first motion was delayed for several hours, with a requirement to back out and realign the Crawler Transporter (CT) under the Mobile Launch Platform (MLP) twice. The stack eventually started to depart the pad shortly before 2:30am local time. 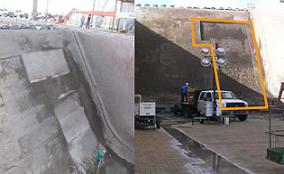 Endeavour arrives at a repaired Pad 39A, following damage sustained to several areas of the pad during STS-125’s launch, mainly on the Solid Rocket Booster (SRB) flame deflector. Around two weeks of repairs took place on the trench, which required a new coat of fondu fyre refractory concrete.

None of the resulting debris from the flame deflector held any risk of impacting the shuttle during launch – although it gained a large amount of documentation in the STS-125 IFA (In Flight Anomaly) and STS-127 SSP FRR (Space Shuttle Program Flight Readiness Review) presentations.

“Flame Deflector Repairs standard turnaround operation. West SRB side is typically damaged. The direction of STS-125 liberations were within model predictions. Areas of liberation was identified as non-mandatory repair,” noted the opening page of the damage overview in the STS-127 SSP FRR presentations (30 of which are available on L2).

“Hydro-blasting in preparation for new application is a recent enhancement (complete). All priority levels of damage on SRB deflector including hollow areas are to be repaired prior to STS-127 (complete).

“Agreement with STS-127 Payload Customer allows for application after Payload to Pad A and is inside PCR (Payload Changeout Room) with PCR doors closed (complete. “Study in work with Orbiter to capture and investigate concerns with potential TPS contamination if future application required concurrent with STS at Pad. Sampling and testing are planned.” 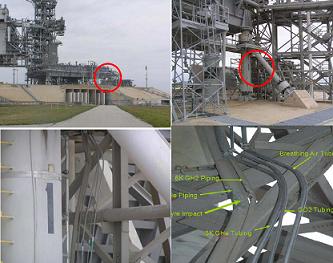 The force of Atlantis’ launch also damaged several pneumatic lines at the pad, which have also been repaired ahead of STS-127’s arrival at the pad on Sunday.

“No line ruptures or leaks occurred. GH2 line could have been isolated. Repairs were required prior to STS-127

“Action Taken/Planned: Repairs Complete. Fabrication of lines and welding of lines and x-rays. Welding of new supports. All areas are now per print, no deltas.

“Investigation in work to identify all similar commodity and communication service lines that are at risk for similar damage. Review for susceptibility for damage, LPS visibility, isolation and safing capability to be carried out.”

Despite the successful completion of repairs – which was never in any doubt to support STS-127’s launch date – Sunday’s rollover places Endeavour’s flow at minus one day on available contingency for a June 13 launch.

Although the launch date won’t be set until next week’s Agency FRR, Mission Management Team (MMT) co-chair Leroy Cain and SSP manager John Shannon understand they face a challenge to be in a posture that will allow for three launch attempts.

However, as is typical of their management style, if they are forced to slip, “so be it”, as the Program works to a mantra of “safety first”.

“The STS-127/2JA SSP FRR went well. The team at the launch site is working extremely hard to get Endeavour ready for this mission,” added the Standup. “Let us be sure to stay within our processes, to ensure safety at all times.

“At the end of the FRR yesterday, John Shannon remarked on the challenges we face to get to a launch date of June 13. Mr. Cain reiterated that we have just come off of an extremely challenging mission where everyone performed in an outstanding manner. We need to stay focused, exercise due diligence in everything we do, and maintain the rigor we have in our processes.

“If we have to slip the launch date to fly safely, so be it. First and foremost, we need to be taking care of our people. Rotate in your deputies and backups as needed so people get some downtime. There is no more important launch than the next one, so please be considerate of your people.

“If there are any concerns, do not hesitate to push them forward. It is management’s job to be sure that we have done the things that need to be accomplished, so the Program is ready to fly.”