STS-125’s John Grunsfeld and Andrew Feustel have completed and extended 7hour, 20 minute EVA-1 – the first of five back-to-back spacewalks – which included with the replacement of the troublesome SI C&DH (Science Instrument Command and Data Handling) system. No major issues have been reported with Atlantis, as her Thermal Protection System (TPS) is provisionally cleared for re-entry.

A few additional issues have made the latest MER (Mission Evaluation Room) list of “funnies” – however, they relate to issues that hold no mission impact, or aren’t even related to Atlantis herself.

One of the latest notes of interest relates to an attempt to download footage taken from a minicam located on the flight deck, a camera which is used to record the flight deck crew during the ascent phase of the vehicle.

“MER 4: Intermittent Ascent Minicam Video: During ascent, the crew-cabin video downlink attempts were made, and the crew reported that there was no video available for downlink,” noted the MER report on L2.

“Initial indications point to a failed cable between the Audio Video Interface Unit (AVIU) and the video recorder, and additional troubleshooting plans are being developed.”

The other recent item of interest surrounds the low pressure reading on one of Atlantis’ Reaction Control System (RCS) engines, namely R5R. Even if this thruster is taken out of action (deselected) for the remainder of the mission, Atlantis would still be able to steer/change attitude without issue.

Meanwhile, the investigation into the ASA channel one failure is pressing ahead, with the creation of a forward plan in work, and a Tiger Team review over the hardware’s flight history.

Over 14 presentations have been created as part of the overview (available on L2), ranging from historical anomalies with the system, to processing documentation, and overviews of the failure with Atlantis. The failure has no mission impact, and is mainly being investigated for the purpose of “lesson’s learned”.

Atlantis’ TPS is all but cleared as acceptable for re-entry – pending one final check during Late Inspections, with only a small area, missed by the Flight Day 2 inspections via the Orbiter Boom Sensor System (OBSS), to be revisited on Flight Day 5.

This is not related to the Chine area damage, which is located on the starboard side of the vehicle.

“There is no indication of damage in this area from the imagery we have but the DAT (Damage Assessment Team) and OPO (Orbiter Project Office) requested a survey to gather the missing imagery.

“Forward plan agreed is to get the missing data via SRMS EE (Shuttle Remote Manipulator System End Effector) only survey with the MFR installed. MER is writing a CHIT to document the tile coordinates and camera settings.

“The on console team are developing the required survey procedures and will determine where the survey best fits in the timeline. Initial thinking has the survey duration at less than one hour which allow in the planned FI time early on FD5.”

Later on Flight Day 4, the STS-125 crew were informed that the total amount of tiles missing from the FD2 inspections was up to 40. However, the re-inspection should still only take one hour to complete. 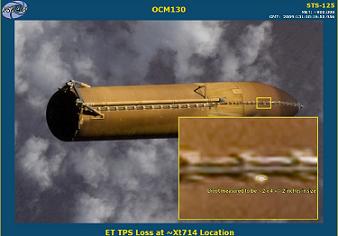 Although it did not cause any serious damage, External Tank engineers are evaluating why a noticeable piece of the LOX IFR (Ice Frost Ramp) liberated during Atlantis’ ascent on Monday.

While ET Umbilical Well photography has not been downloaded – due to an error in the system – handheld photography spotted the missing piece of foam, which is currently been classed as the likely source of the T+104 second impact to Atlantis starboard Chine area.

The resulting dings on the tiles has already been cleared for re-entry, and the foam loss is currently classed as the only notable TPS liberation from the tank during the eight and a half minute ascent to orbit.

However, based on a run of very “clean” tanks leading up to STS-125, the loss from a ‘dangerous’ (in relation to orbiter impacts) area of the tank, along with the time of the liberation, will be discussed in length during the STS-125 IFA (In Flight Anomaly) review.

A full TPS overview article is being created for publication at the weekend, via a superb DAT presentation (L2) which evaluated every area of interest during the FD2 inspections. 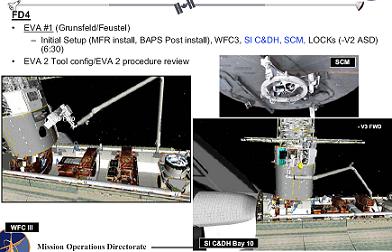 “We gave Hubble a hug, but in traditional Hubble fashion, it threw us a couple of curves, but we have overcome them,” noted Grunsfeld at the conclusion of the spacewalk.

Grunsfeld (EV1) and Feustel (EV2) were assisted by Megan McArthur, who was controlling the robotics of the Remote Manipulator System to position Grunsfeld during his spacewalk, while Feustel is a “free floater”.

“The EV crew then retrieves the WFC-3 from the WFC Scientific Instrument Protective Enclosure (WSIPE) on the SLIC and return to HST (-V2 doors) to install WFC-3 (performed by EV2). IV gives a go for the aliveness test. EV2 then retrieves WFPC2 from the temp stow location and is maneuvered to the WSIPE to stow, while EV1 holds the WSIPE lid open.”

The replacement of the SI C&DH was a new addition to the schedule, following the failure of its Side A just prior to the previously scheduled launch of Atlantis to Hubble last year. The resulting rescheduling was caused by the requirement to test and certify the replacement SI C&DH system for installation into the telescope. 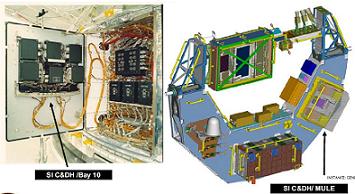 “SI C&DH: EV1 translates to the MULE and retrieves the new SI C& DH (SI C&DHR),” added the overview. “Meanwhile, EV2 is maneuvered to Bay 10 to remove the old SI C&DH. EV1 and EV2 swap their SI C&DH’s at the MULE location. EV1 stows the old box in the MULE, while EV2 (RMS) returns to HST Bay 10 to install the new SI C& DH. IV gives go for the aliveness test.

“SCM (Soft Capture Mechanism) & Locks: EV1 (FF) performs the SCM install by translating to the SCM interface on the –V2 side of the FSS. He installs a battery for SCM indicator lights, drives bolts, and then verifies that the SCM has released from the FSS and is engaged to HST.

“At the same time SCM install is going on, EV2 rides over to Bay and does a Bay 2 Door bolt release. Next both, crew head over to the MULE to retrieve the three (3) -V2 Door locks. Then they head over to the –V2 aft shroud door and install the locks (EV2, with EV1 assisting where possible).

“The preferred order of installation is top to bottom. If time permits, EV1 will perform a lube application on the –V3, +V2 and FGS-2 (+V3) bay doors.

“The crew head to the airlock, where EV2 egresses the MFR. They enter the airlock, install the SCU to the Display And Control Module (DCM). EV1 closes the outer hatch.”

While back to back EVAs aren’t commonplace for shuttle missions to the International Space Station, the pace will not let up for the Hubble tasks, with the next EVA following on Friday.