HST farewell ahead of Late Inspections – panel 11R of interest 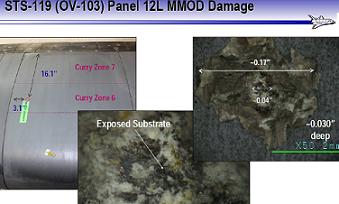 The last humans to visit the Hubble Space Telescope have departed, leaving behind a rejuvenated spacecraft that will keep astronomers happy well into the next decade. Atlantis’ highly successful mission has completed Flight Day 9, which included Late Inspections – with one RCC panel (11R) deemed to be of increased interest due to a potential MMOD strike registered earlier in the flight.

Heading towards the final leg of the mission, Atlantis and her crew have a busy FD9, which opened with the charging of the Hubble’s batteries – required early in the day in order to allow the opportunity for backup daylight pass.

The SRMS (Shuttle Remote Manipulator System) then grappled the telescope while its umbilicals were disconnected.

While Atlantis maneuvered to the HST release attitude ahead of HST deployment, Mike Massimino and Mike good carried out a full EVA prep – up to the point of donning their EMU suits – in the event of being required to manually troubleshoot an issue with the release.

After a successful release – pre-empted by the opening of Hubble’s Aperture Door and the SRMS release – Atlantis performed two burns to place the orbiter in a safe relative motion separation from HST, before performing an Orbit Adjust burn to lower one side of the orbit, thereby removing herself partially from the high debris field for around half of her resulting elliptical orbit.

Following on from Flight Day 2’s inspections, another overview of Atlantis’ Thermal Protection System (TPS) was conducted later in the flight day. However, only critical surfaces – such as the Wing Leading Edge (WLE) Reinforced Carbon Carbon (RCC) panels – were re-inspected.

“Only the WLE RCC and Nose cap inspections are repeated from FD2. New for STS-125 only, daylight requirements for Zones 1-4 of Panels 8 thru 11 for both Port and Starboard surveys.

“These particular panels are of importance to determine minimum diameter impacts. A portion of the Port Zone 1-4, Panel 8-11 scan has a poor IDC angle. Therefore, a dedicated repeat of that portion (about 30 minutes) will be performed.

“The attitude and pointing constraints are the same as for the FD2 inspections.”

MMOD strikes since Flight Day 2’s inspections are the only real threat to the orbiter’s TPS, with the increased risk well known ahead of Atlantis’ flight to Hubble, which is in a higher – more debris potential – orbit than the regular trip to the International Space Station (ISS), which also provides a level of protection to a docked orbiter. 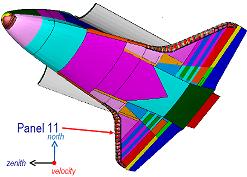 Thanks to the WLE IDS (Impact Detection System), Atlantis can “feel” the slightest impact to her RCC panels during the mission, and it was one small “trigger” on Panel R11 that has attracted the attentions of the Mission Management Team (MMT).

“Potential MMOD Damage on Panel 11R: Provide a description of the expected damage on Panel 11R if the 0.47G WLEIDS indication was due to an MMOD impact,” listed one expansive presentation created by the Orbiter Project Office (OPO) and available on L2.

The registering of a 0.47 Grms trigger wouldn’t normally be of any concern, with recent ISS flights registering ‘impacts’ of up to 2.5 Grms – and 10.0+ Grms usually classed as the point where damage becomes a concern.

However, several factors have to be taken into account, such as the make-up of the debris that impacts, the angle, its mass, the health of the WLE IDS sensors, and the orbiter’s attitude at the time. These factors have raised the level of interest in the 11R event.

“Given the attitude and assuming an orbital debris strike on 11R, damage is more likely on the lower surface than upper,” added the presentation. “Cannot preclude orbital debris or micrometeoroid impacts to the upper or apex surfaces. O1 indication at GMT 132:20:00:18. Attitude was PYR: R40.18, P21.29, Y40.14.”

Managers are not concerned that the impact – if confirmed to be an impact in the first place – will have breached the level of acceptable damage. Coating damage, pits and even small holes would not prove to be a safety issue on re-entry. For context, the damage to Columbia on her ill-fated STS-107 mission resulted in almost a full panel missing, as opposed to the worst case scenario of a microscopic pinhole for Atlantis.

“For Panel 11R, the expected damage is coating damage with limited exposed substrate which would not exceed the damage criteria for Panel 11R (0.16 in. dia.),” added the presentation. “High confidence in detecting critical damage on Panel 11 with LDRI (Laser Dynamic Range Imager). IDC (Digital Camera) imagery on STBD lower surface will also be available.” 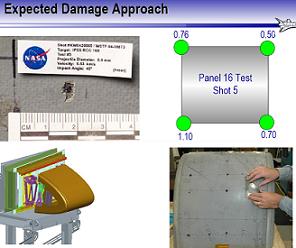 Backing up their findings, testing was conducted at the White Sands Test Facility (WSTF), in an attempt to reproduce how the RCC panel coped with a similar impact that potentially occurred on Atlantis.

“Evaluate WSTF Hypervelocity Impact Test Data on Panel 16R (Test Article). Test consisted of 20 impacts on an RCC panel with accelerometers on the spar. Damages ranged from SiC only damage to through penetrations. Data cannot be used directly due differences in boundary conditions between the vehicle and test,” noted the test results.

It is highly likely that any potential damage will not be anywhere near enough to threaten the requirement of launching Endeavour – currently sat on Pad 39B as the STS-400 LON (Launch On Need) shuttle, and ready to enter her launch countdown on Wednesday if required.

Even if the damage was unacceptable for re-entry, an EVA repair would likely be the first option available to the crew.

“A go for PRSD load will indicate possible concern in the TPS Late Inspection. A No-Go decision will result in a 24-hour hold in S0007, and the launch team will remain in a LON posture until completion of the de-orbit burn.

“If landing is waived off on Friday, the 24-hour holds will continue until the de-orbit burn has been completed. S0024 Hyper QD (Quick Disconnects) de-mates will be performed in S0007 post-PRSD load.”

Related to both Friday’s targeted return of Atlantis and Flight Day 10’s well earned off duty time for the crew, the MMT evaluated the issuing a waiver to enable a landing on orbit rev earlier than scheduled. The waiver would allow for the resulting violation in the Shuttle Crew Scheduling Constraints (SCSC).

“Rationale for requesting the earlier landing opportunity: Increased propellant margin. Provide a landing opportunity prior to expected KSC sea breeze setting up. Provides 3 deorbit opportunities at KSC EOM +1. Crew was informed about the request last night and will provide their recommendation.

“Request approval of MMT to waive the SCSC constraint in the event crew agrees to the sleep shift plan.”