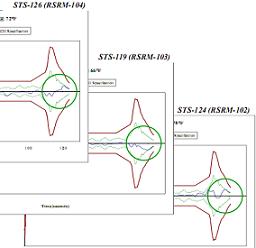 With launch of STS-125 now less than a week away, NASA managers have thoroughly reviewed the performance of the Solid Rocket Boosters (SRBs) from the previous missions, approving several safety and performance upgrades to aid Shuttles Atlantis and Endeavour on their STS-125 and STS-400 missions respectively.

The first issue relating to the SRBs discussed at the SSP FRR (Space Shuttle Program Flight Readiness Review) pertained to the thrust tail-off imbalance noted during the STS-119 mission in March.

While SRB thrust tail-off imbalance occurs on every mission, strict guidelines are used during the casting/pouring of the SRB segments’ propellant at the ATK factory in Utah to minimize all aspects of thrust imbalance during SRB flight.

However, the STS-119 event followed the STS-124 thrust tail-off imbalance in May 2008 and the less severe event on STS-126 last November.

As a result, the SSP has provided the GN&C community with all RSRM reconstruction data to support their analysis of the various flight control systems responsible for detecting this type of imbalance and taking the necessary action to correct the vehicle’s attitude/pitch/yaw accordingly.

For this, the GN&C community has been tasked with identifying any “design, process, and material factors” that could have/could be contributing to the thrust tail-off phenomenon.

In addition to the GN&C investigation, the SSP has developed a working theory, which pertains to a burn rate variation.

“Primary contributor to trace shape variation observed on STS-119, STS-124, and STS-126 is a burn rate variation and location of added mixes in the segments,” notes the presentation.

In addition to this theory, several upgrades have been added to the engineering, manufacturing, and analytical controls to “keep thrust imbalance on future flights well within CEI requirements.”

As such, an extensive review of the propellant casting process for STS-125 and subsequent flights that will use already poured SRB segments has been conducted, resulting in clearance for flight for all of those segments. 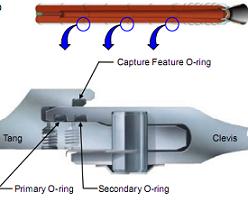 An additional change to the SRBs on STS-125 relates to the replacement of the fluorocarbon O-rings with a newly developed V1288 O-ring in the field joints of the SRBs.

The V1288 O-rings are new low-temperature fluorocarbon O-rings that were developed to “improve resiliency at lower temperatures with no degradation to other performance characteristics,” notes the RSRM presentation.

These new O-rings will allow the Space Shuttle to fly with higher safety margins and/or at lower temperatures.

The basis for verifying these new O-rings for flight included, but was not limited to, Anchors modeling (with showed compliance with all CEI tracking requirements), high temperature sealing capability that was equivalent to the O-rings used on STS-119 and several previous missions, splice strength that showed “no degradation with age,” and an ablation and erosion of less than half that of the previous O-ring flight model.

These O-rings flew successfully on ATK BSMs on STS-122, STS-123, STS-124, STS-126, and STS-119 – which added confidence to the application of these O-rings in the RSRM segment field joints on STS-125 and subsequent flights.

Furthermore, the RSRM presentation to the SSP FRR also notes changes to the minimum allowable temperatures for the SRB field joints. 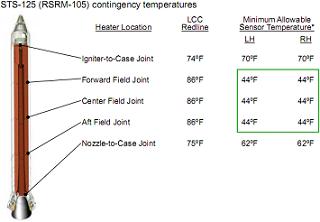 However, the J-leg has the potential to experience “low temperature performance degradation” because the J-leg becomes stiffer and shrinks in colder temperatures.

“RSRM designed to maintain J-leg axial engagement at ignition for temperatures from 90 degrees F down to 40 degrees F,” notes the SSP FRR presentation.

However, a full up test of the field joint thermal protection system has not occurred at the lower 44 degrees F limit.

In fact, the lowest tested temperature is 56 degrees F with no humidity conditioning. During those tests, there was no hot gas penetration past the J-leg tip.

This means that during a launch scenario with a 44 degrees F temperature reading, there is an increased potential for gas penetration into the J-leg because of “rubber shrinkage at colder temperatures.”

Nevertheless, while a full up test of the field joint thermal protection system at the 44 degrees F limit has not been conducted, multiple tests with intentionally flawed components have been undertaken.

Through all these tests, the RSRM presentation notes that “no capture feature O-ring failure or primary O-ring erosion” occurred; in fact, “hot gas to primary O-ring required intentional flaw alignment of every redundant feature.”

Furthermore, “Potential opening of the J-joint, caused by cold temperatures, creates a less severe environment or less severe gas impingement than a flaw focused on the capture feature O-ring,” notes the RSRM presentation.

In all, the thermal protection system for the RSRM segments is certified for flight. Intentional flaw testing and analysis shows compliance with both upper and lower temperature extremes as well as flaw size extremes that may be present as a result of the segment-mating process.

In summary, all O-ring seals and joint thermal protection systems meet all the necessary flight requirements at 44 degrees F. Therefore, STS-125 and subsequent flights are safe to fly with the new O-ring configuration under the failed heater field joint contingency temperature of 44 degrees F.

In addition to the internal modifications, NASA engineers have repositioned the Right Hand Forward Skirt Aft Pointing (FSAP) camera on the exterior of the SRB.

The change, which Shuttle Program Manager John Shannon noted during the FRR Briefing last Thursday, was done at the request of the Debris Integration Group.

The precise reason for the modification is to gain further engineering data on the inter-tank region of the External Tank – an area of the tank that has experience minor, yet consistent, foam loss over the last several flights.

This camera re-configuration has flown once before, on the STS-120 mission in October 2007. That repositioning was performed to gain a wider view of the newly designed Ice Frost Ramps.

Nevertheless, subsequent flights from STS-120 all utilized the previous SRB camera configuration – a configuration which debuted on STS-121 in July 2006.