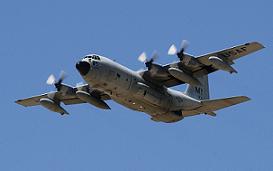 When Atlantis thundered off LC-39B on December 2, 1988 to begin the classified Department of Defense STS-27 mission, the members of the 106th Rescue Wing, performing their first launch support duties for NASA, could hardly have predicted that their prestigious wing would serve in this dignified position for 100 Shuttle missions. And yet, that idea will come to pass on Monday when Atlantis launches on STS-125.

For 21 years and five months, the 106th Rescue Wing has provided invaluable support to NASA and the various Shuttle crews who have passed through the Kennedy Space Center on their way to earth orbit.

“In the event the astronauts have to make a parachute descent into the Atlantic Ocean, they would be spread out about a mile apart given the speed the Space Shuttle would be traveling as the astronauts exit the Shuttle.”

At this point, it would be up to the 106th Rescue Wing to locate, attend to, and rescue the stranded astronauts – a task the 106th has been ably willing to provide now for 100 Shuttle missions.

In honor of this occasion, I was fortunate enough to sit down with Colonel Michael F. Canders, Commander of the 106th Rescue Wing to discuss the Rescue Wing’s specific duties and personnel qualifications for Shuttle launch support operations.

Chris G: What type of training do the members of the 106th Rescue Wing perform in order to qualify for assignment to a shuttle launch?

Col. Canders: There’s a series of ground training operations that summarize a Mode-8 exercise, which is the worst case emergency for the astronauts. The astronauts would be bailing out in a Mode-8. So we actually simulate that right here out of Patrick Air Force Base with the astronauts.

The last Mode-8 exercise we conducted was about two years ago. In that simulation, the astronauts were taken out into the Atlantic were they spent the night on one of the SRB recovery vessels. Then, they received water survival training and they were put in rafts in early morning hours, when it’s still dark, to receive practice in signaling techniques, how to communicate with the rescue forces.

Then, once those safety lessons were completed, we declared a simulated Mode-8 to our recovery forces back a Patrick. We went through the process of starting a recovery.

Chris G: You mentioned the training exercise, how often do you conduct a full-up simulation for this type of event?

Chris G: Is participating in one of these simulations a mandate for being assigned to the support crew during a Shuttle launch?

Col. Canders: It is, but one of the challenges we have right now is that we’re really busy. We’re deployed in Iraq, Afghanistan, and the horn of Africa. So I think that if someone hasn’t done the Mode-8 simulation it wouldn’t necessarily stop them from participating because the fundamental skills are practiced all the time.

What you’re really practicing with a Mode-8 are the coordination and the communication skills that are unique to a Shuttle crew rescue. So if you had a co-pilot that hadn’t had a Mode-8 but you had an experienced aircraft commander on the crew, that would be okay.

Chris G: So on launch day, what is the basic operating situation?

Col. Canders: We actually stage a HC-130 down-range from the cape in the area where our mathematicians tell us the best place to be is in case we do have to support a Mode-8 abort. So at Patrick, we have two HC-130’s ready to fly. We get them both ready and taxied down the runway. Once the first one is up and away, we take the second HC-130 off the runway and keep it in standby mode. 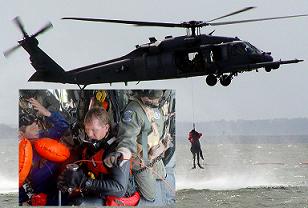 If a Mode-8 were declared, we’d then get that second HC-130 up in the air and out to assist with the rescue.

Chris G: Is there any down-range limit to your support capability?

Col. Canders: We typically calculate our recovery area at about 200 miles down-range but it could really be anywhere. However, the air re-fueling capability of the helicopter is really what makes this a unique mission. Because of this capability there is no range limit to our operations.

Thanks to the airborne refueling capability of the helicopter the limit is really just the personal fatigue factors of the crew. We’ve had a few civil rescues of 16 upward to 18 hours. So that’s pretty demanding on the crew because the helicopters we’re flying are designed and fitted for the rescue so you’re sitting there without being able to get up. It can be very difficult.

So our crew limitation is 12-hours. Of course, in life-and-death situations, that would be extended.

Chris G: What is some of the special equipment that you would use if you ever did have to go rescue a Shuttle crew?

Col. Canders: We have a thing called a RAMZ. It’s a rapidly deployable zodiac which has an outboard motor integrated into this package – which is a special configuration for this type of mission. Once the entry point of the astronauts is determined, the HC-130 will fly to that and they will deploy specialized boats which are dropped by parachute.

The load masters for the HC-130’s will throw one, two, or three of these boats out. Para-rescue men will parachute out after them and fly to where the zodiacs are located. Then, those boats become a triage area for the astronauts, with a para-rescue man motoring the small vessel to the astronauts. In the mean time there’s another triage area that will be set up in a larger raft where the astronauts can be brought to and further attended to while the rest of the zodiacs do their thing.

Chris G: Obviously STS-125 is a due east mission out of Kennedy but on missions to the ISS that parallel the eastern seaboard, do you also deploy along the coast as well?

Col. Canders: Our home base, Bareski Air Force Base on Long Island is frequently a recovery site. We also deploy para-rescue men to Spain and France for TAL site support.

Chris G: What about Shuttle landings? We’ve heard a lot since Columbia about crew’s getting low enough to bail out in the event their vehicle is damaged. Do you also provide support those types of emergencies?

Col. Canders: Typically, we do not. The team here at Patrick Air Force Base will do that.

Chris G: How many personnel do you have here for 125?

Col. Canders: For STS-125 we have 12 men stationed at Patrick Air Force Base.

Col. Canders: Thank you, Chris and NASASpaceflight.com for your interest in our duties.