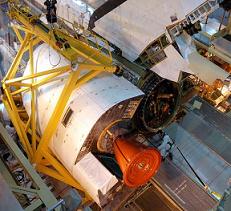 Atlantis has entered the complex ballet of S0007 (Launch Countdown) operations for the flagship STS-125 mission to the Hubble Space Telescope, with no major issues being worked by engineers at Pad 39A. Atlantis – tracking a launch target of 2:01pm local on Monday – and has undergone the closure of her Payload Bay Doors (PLBDs).

Engineers are ably coping with two processing flows out at Complex 39, with Endeavour also in a smooth flow towards her STS-400 LON (Launch On Need) requirement. However, the focus is understandably on Atlantis, as she passes the milestone of entering S0007.

Friday processing reports (via L2) note all issues have been successfully worked, with no constraints to entering the countdown. A recent issue of note related to an obstructive Teflon tube – as previously reported – has been cleared for the current procedure of PLBD closure for flight.

“Hyper/MPS (Main Propulsion System) pressurization/closeouts are complete. Payloads picked up a PR (Problem Report) on a GN2 Teflon tubing potential interference with the PLBD during closure; the issue was fixed yesterday once Pad-A was opened for controlled work,” noted the latest Shuttle Stand-up/Integration report on L2.

“Refrigeration unit position 1 temperature transducer A505199 is not controlling to the set point. Engineering disposition is in work and a new part is on order.

“While towing the Bird Radar for setup in support of the launch, the horizontal scan bracket was damaged when it came in contact with the Orbiter simulator in the hangar at the SLF (Shuttle Landing Facility); damage assessment and repairs continue. The backup radar was installed and is supporting the launch.

One late item that required clearance for flight related to an attach bolt that was observed to be slightly loose on Discovery’s right hand OMS (Orbital Maneuvering System) Pod during her STS-128 (post flight STS-119) processing flow inside OPF-3 (Orbiter Processing Facility).

“(Issue) was picked up last night during the RH OMS pod removal,” noted STS-128 processing information on L2. “During preparations for removal, it was discovered that the attach point 3 bolt was loose/under-torqued, it should have been at 4800 in-lbs.

“The troubleshooting plan will involve using borescopes to measure the threads on all the attach bolts on both left and right pods to get a baseline and then to perform inspections as the pod is separated from the deck. The constraint is to pod removal.”

While that issue will be cleared on Discovery, due to the identical hardware and processing procedures carried out on her sisters, inspections were called on both Atlantis and Endeavour out at the pads. No issues were found on either orbiter – allowing for a wavier for flight to be issued.

“The inspection verified the attach bolts were fully engaged in the locking feature of the nut plate and sufficient thread protrusions were evident. No personnel entered the aft to maintain aft confidence and the 50-1 and 2 doors were re-installed for flight.”

Saturday afternoon will involve a meeting of the Mission Management Team (MMT), which will discuss the progress of S0007 operations.

Sunday will also involve a meeting of the engineering groups that will discuss Atlantis’ flow and processing with the quarantined STS-125 crew via telecon. This will be a major engineering overview presented to the crew overviewing work on the orbiter since last September.

The MMT will meet again on Sunday and again on Monday, with the goal to approve a “go” for tanking early on Monday morning.

“L-2 MMT review is scheduled for Saturday May 9th at 1700 EDT in OSB II room 5109,” added the Stand-up report, before adding a rallying call from MMT chair Leroy Cain.

“All team members need to remember to stay focused. There are many moving parts and we cannot afford to take our eye off of the ball. (Mr Cain) is very proud of everyone’s effort towards mission success.

“There is nothing more important than for us to do our job to the best of our ability every day.”