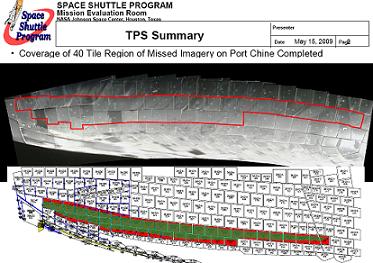 After the marathon spacewalk (EVA-1) by astronauts John Grunsfeld and Drew Feustel on Thursday, Mike “Mass” Massimino and Mike “Bueno” Good have conducted an even longer second EVA, changing out all three units of Rate Sensor Units (RSUs) on the Telescope – one of which is proving to be very problematic – and replacing Hubble’s batteries in Battery Bay 2. The EVA last nearly eight hours, the eighth longest spacewalk in history.

“A two inch wide strip of 16 tiles on the port chine was missed during the FD2 ascent debris inspection due to insufficient scan overlap,” noted an MMT presentation from FD-4, which was later upgraded to 40 times by the Damage Assessment Team (DAT).

Currently, the DAT and Orbiter Project Office (OPO) teams have no reason to believe that this portion of Atlantis’ TPS tiles was damaged during Monday’s liftoff.

Nevertheless, these two departments have requested a survey of the missed TPS area as a precautionary measure, mainly to ensure that Atlantis’ TPS is clean for reentry in the unlikely event of a systems failure that would require the vehicle and Flight Crew to make use of the next available Primary Landing Site in the US.

For the new survey, Atlantis’ Flight Crew did not use the OBSS; rather, they will use the Shuttle Remote Manipulator System’s (SRMS) End Effector (EE) camera.

Furthermore, the MFR, a foot restraint that attaches to the end of the SRMS for EVA operations, was not removed at the end of yesterday’s EVA because the MFR was not deemed as an obstruction of the EE camera’s field of vision for the survey.

In all, the survey of the missed area did not last longer than one hour, with only one area of interest spotted during the live feed of the inspection – which will be evaluated by the DAT.

Floating outside of Atlantis’ airlock for EVA-2 will be veteran Hubble surgeon Massimino (EV3) and rookie spacewalker Good (EV4). On tap for the two astronauts during the scheduled six hour 25-minute spacewalk are the change out of the RSUs and Bay 2 Batteries.

First on the timeline for Massimino and Good is the change out of the Rate Sensor Units – which were previously changed out on Servicing Mission-1 (SM1) in 1993 and SM3A in 1999.

The three new RSUs are stored on the Orbital Replacement Unit Carrier in Atlantis’ Payload Bay, directly in front of the Flight Support System (FSS) were Hubble is currently berthed.

This task, which is expected to take a little over three hours to complete, is the number one task on the 11 task priority list for the STS-125 SM4 mission.

UPDATE: However, after successfully installing the replacement RSU2, RSU1 failed to seat and bolt into position. While RSU3 successfully took the place of RSU1, the plan moved to placing the new RSU1 in RSU3’s position also proved to be problematic.

With the issue confirmed to be with RSU1 itself, the spacewalkers were informed to move to a backup plan of installing an old unit from the Contingency ORU Protective Enclosure (COPE), into the remaining postion. This also seemed to be “wobbling” on the installation plate, before success was finally forthcoming via a successful attempt to bolt the spare RSU in place. Hubble now has two new RSUs, and one spare, successfully installed.

Similarly, the Removal and Replacement (R&R) of the Bay 2 Batteries in Hubble is number five on the priority list.

The battery change out, which is expected to take just over an hour and a half to complete, is one of two battery R&R operations that will be performed on this flight. The second, the change out of the Bay 3 Batteries will take place during EVA-5.

Furthermore, after the battery R&R takes place, controllers will command Hubble’s Solar Arrays to slew to the 90-degree position to enable charging of the batteries.

After a sufficient charge has been obtained, controllers will slew the Solar Arrays back to the 0-degree position in preparation for EVA-3 the following day.

This yaw bias would be required for the duration of the crew sleep period beginning at the end of FD-5.

In addition to this timelined work, Massimino and Good may have the opportunity to perform a get-ahead task for the Advanced Camera for Surveys (ACS) repair, a repair that is slated to begin on EVA-3.

For this get-ahead task, which would only take about 15-minutes to perform, Massimino and Good would install the PIE Harness to the HST.

Furthermore, on this EVA, Mike Massimino will evaluate the performance of the modified gloves – the Overglove that has been used on previous Station flights as a suit damage mitigation tool – that are being used on this mission.

In particular, Massimino will determine if the Overgloves allow for the required dexterity/tactile feeling that will be crucial during the scheduled STIS (Space Telescope Imaging Spectrograph) repair on EVA-4. This tactile feeling and dexterity is extremely important given that the STIS repair involves work with some 117 fasteners.