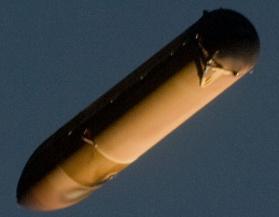 STS-125’s Flight Day 2 has been completed, highlighted by the inspections of Atlantis’ Thermal Protection System (TPS) as she prepares for Wednesday’s capture of Hubble. Atlantis’ launch suffered from a few minor issues during ascent – which hold no mission impact – although the blast-off damaged Pad 39A, with up to 50 sqaure feet of Fondu Frye refractory concrete liberating from the flame trench/flame defector.

Atlantis launched successfully at 14:02 local time, with only two areas of interest during the countdown, one relating to a weather front over the TAL (Transatlantic Abort Site) in Spain, and the other being a small amount of ice on the LH2 ET Umbilical – which was soon cleared for launch by the DAT (Damage Assessment Team).

Atlantis powered off the launch pad without issue, despite what appears to be an indication that one of the studs, which hold down the Solid Rocket Boosters (SRBs) prior to T-0, suffered from a “hang-up” – which in itself is not uncommon, and would easily be broken by the power of the ignited boosters.

“Peak to peak lateral acceleration at liftoff was about 0.13 g which is less then the value of 0.19 g’s that could indicate a stud hang-up at liftoff,” noted launch review information (L2).

“Final evaluation of hold down bolt performance depends on strain gauge analysis, and launch pad and booster skirt inspection but there is no early indication of any issues.

“SRB performance is indicated to be slightly hot as shown by a negative value of -0.448 seconds for TDEL_ADJUST which is greater than the dead band for AGT throttling of +/-0.21 seconds. The first stage throttle bucket was adjusted with an extra step down to 104/94/72/104 percent (of rated performance).”

Meanwhile, efforts are already underway to retrieve Atlantis’ two Solid Rocket Boosters (SRBs) from the Atlantic Ocean, before being towed back to port later this week.

“Liberty Star and Freedom Star are expected to return to dock Wednesday May 13 at 0800 and 1100 EDT. Open assessment is scheduled for Thursday May 14 at 0700L.”

Flight Day 1 activities were completed prior to crew sleep, involving the opening of the Payload Bay Doors and the deployment of the Ku-band antenna. Atlantis RMS (Remote Manipulator System) was also activated for an initial survey of the crew cabin TPS, while efforts to download the ET Umbilical Well and Handheld External Tank photo and TV downlink were initiated.

However, as observed on recent missions, the ET umbilical well photography suffered from an issue via the transferring of the images from the system for downloading to engineers on the ground.

While the images would provide a useful overview of the External Tank’s health – notably any foam loss from the tank, which could be matched up with any potential damage to the orbiter – Flight Day 2’s inspections will provide the most important overview of Atlantis’ heatshield.

Handheld photography of the External Tank (ET-130) – post separation – have already been downloaded to engineers on the ground, and are being evaluated by the DAT (one image to the left, large set of hi res images available on L2).

The Mission Evaluation Room (MER) are only tracking two issues with the orbiter, both noted during ascent. Neither hold any mission impact, although a “Tiger Team” has been called to evaluate the ASA issue.

The issue with the Aerosurface Servo Amplifier (ASA) – which is only used during launch and landing – relates to a power loss during launch. Following an ASA MER meeting last night, it was decided to remove a switch retention device that had been installed by the crew and turn ASA 1 to off.

Engineers decided that since leaving it on is uncertified, and it would recover when repowered for entry, “the prudent action was to turn it off.” The crew have completed this action and have reinstalled the switch retention device.

There are four ASA channels in the orbiter’s avionics hardware, used to control the aerosurfaces on the vehicle. The only mission impact would come via a loss of a second channel, which would force a landing at either KSC, White Sands or Edwards/Dryden on the next opportunity.

Expanded MMT (Mission Management Team) notes on L2 overviewed the failure in depth, noting it caused a master alarm to sound on the flight deck shortly after launch.

“Almost immediately at liftoff several engineering groups observed a failure of AeroSurface Amplifier (ASA) 1. At C11, we saw the Flight Control Channel 1 fail and we also saw the ASA 1 RPC A and B go OFF. These indications resulted in a Master Alarm in the cockpit along with Caution & Warning and other indications.

“A post launch review of the data showed that the failure seemed to have occurred two to four seconds prior to liftoff after main engine ignition and the resulting shake and bake. An EPD (Electrical Power Distribution) review of their BMU data of Main Bus A shows that Main A bus saw a 400 hz signal with a peak to peak of 100 amps. EPD is going to look at the Main B data next.

“Other data from Flight Controls showed the channel 1 position feedbacks of the Rudder and Aerosurfaces (not the aerosurfaces themselves) started oscillating approximately a few seconds before the ASA RPCs tripped indicating a power quality problem.

“This ASA was installed for STS 117 in Dec 2006 and has flown twice prior to STS 125. It is a clean no tin whiskers box. The symptoms of the failure indicate that either this was a failure of the power supply in the ASA or a shorted wire somewhere. It is possible that the vibration of SSME ignition triggered the failure.” 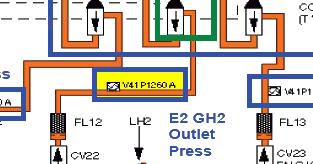 The other MER item, relating to a transducer that failed during ascent, also has no mission impact.

“There are no further impacts to the STS-125 mission for this failure. This parameter is only checked by Caution and Warning in OPS 1 and 6.”

Other issues being evaluated include APU 2’s (Auxiliary Power Unit) Drain Line Temp, which was noted to have exhibited an increase in temperature at 131:18:11 GMT from 82F to 108F, indicating a dynamic fuel pump seal leak, allowing a slug of warm fuel to pass the T2 sensor. However, no limits were violated, according to MER.

Additionally, an indication that a startracker door on the orbiter opened at T+2:30 during ascent is being blamed on bad downlist data, as opposed to a physical opening of the door – thus will unlikely make the MER “funny” list.

One issue on the ground currently being evaluated relates to Pad 39A, which was reopened yesterday for controlled work at 18:21 local time. During Post Launch Securing work, engineers were greeted by several areas of damage.

“During launch, between 25 and 50 square feet of Fondue Fyre from the North side of the main SRB flame deflector was liberated,” added information on Tuesday (L2). The liberated Fondue Fyre appears to be next to a section that had been previously repaired post STS-120.”

The pad regularly suffers from damage to its flame trench areas during launches, as the immense power of the vehicle impacts the concrete and steel structures. The largest amount of damage was observed on STS-124’s launch, where thousands of bricks liberated from the side wall of the trench liberated, requiring extensive repairs.

The damage caused by STS-125 launch is nowhere near as bad, although pressure will be placed on the repairs, with Endeavour due to launch on STS-127 from 39A in just over a month’s time. Engineers noted they should be able to complete repairs within the required timeline for STS-127’s launch. 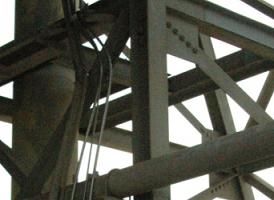 More will follow when a repair plan is outlined.

With Atlantis setting her sights on capturing Hubble on Flight Day 3, she was due to conduct two burns as part of her pursuit on Tuesday. However, the NC2 is no longer required, allowing for a slight change to the running order of Flight Day 2’s activities.

Following crew wake up at 5am Eastern, the Payload Bay Flight Support System (FSS) was rotated ahead of schedule, in preparation of Hubble’s capture into Atlantis’ Payload Bay.

This was then followed by the unberthing of the Orbiter Boom Sensor System (OBSS) for Tuesday’s inspections of Atlantis’ TPS – which is an expanded survey being conducted due to the lack of the RPM, utilized on all missions to the International Space Station (ISS), which is obviously not the case on STS-125.

“Due to unavailability of ISS RPM imagery, additional areas of the orbiter are required for inspection,” outlined the Flight Plan walkthrough (L2). “All FD2 inspection data should be on the ground prior to crew sleep. There are around 2 hrs 40 minutes of additional inspection time on FD2 compared to an ISS flight and makes for a very busy and tight timeline. 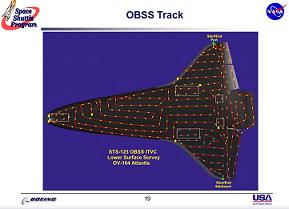 The OBSS instrumentation package – which rides on the end of the 50 foot boom – consists of visual imaging equipment, the Laser Dynamic Range Imager (LDRI), and the Laser Camera System (LCS). The post-Columbia modification has sensors that can resolve at a resolution of few millimeters, and can scan at a rate of about 2.5 inches per second.

“The surveys are scheduled to continue through the night passes, but the crew may elect to pause if the night time visuals are not sufficient.”

As noted live in the update pages, damage was observed on Atlantis via the OBSS, became an item of evaluation by the Debris Assessment Team (DAT). However, this damage has already been cleared, with no need for a Focused Inspection.

More will follow in the next article early on Wednesday, along with a new status update via 14 MMT presentations uploaded to L2.

Atlantis’ TPS in good shape as she hooks up with Hubble