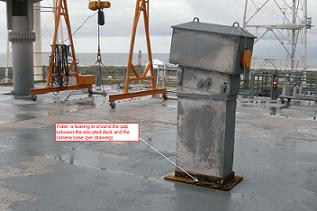 The DAT (Damage Assessment Team) have completed the review of Atlantis’ Flight Day 9 Thermal Protection System (TPS), with no concerns noted, as the STS-125 crew close in on three landing opportunities at the Kennedy Space Center on Friday – weather permitting. Meanwhile, Pad 39A repairs are continuing, ahead of expected rollover of Endeavour for STS-127’s launch next month.

Two new issues have been reported by the Mission Evaluation Room (MER) on Flight Day 10 – which is mainly an off duty day for the crew.

Atlantis continues to perform well on orbit, with all reported MER “Funnies” holding no mission impact, including the two additional items of interest – one relating to an Aft Flight Deck Display (AFD) processor, and another on a previously seen condition with Left OMS Pod temperature readings.

“During on-orbit operations, the crew can replace any failed IDP with the IDP4, recovering full 1R3 redundancy for entry, and continue to NEOM (Nominal End Of Mission.

“‘IDP 4 BITE FAIL’ message – observed during IDP4 power up. Error cleared in 5 seconds. S/W (Software) reports, once and if it clears then won’t repeat. IDP is currently performing nominally,” noted MER information on L2. “Waiting for results of next power cycle (tonight). Expectations are that the error will not repeat.

“Left OMS Pod Lower Fuel Tank Temp: After going to B heaters, increased to near the SM limit of 95 deg F. Prop sent up a TMBU (Table Maintenance Block Uplink) as a precaution. OMS/RCS are watching the issue but are not concerned. Similar signatures observed on STS-115, 117.”

The full overview of Atlantis’ TPS will be collated over the next 24 hours, due to the complexity of the DAT tools for outlining any ROI (Region Of Interest) which can number in the hundreds.

However, the key communication of Flight Day 10 came via DAT engineers noting no ROIs are deemed as a problem for the orbiter’s safe re-entry – which was noted to the Orbiter Project Office (OPO) and the MMT midway through Wednesday.

“The MMT continues to meet daily with no significant issues being worked; the mission continues to proceed as scheduled,” outlined the MMT on the morning of FD10. “All level 1 LDRI (Laser Dynamic Range Imager) and IDC (Digital Camera) imagery has been review and there are no concerns, level 2 screening is continuing. Next status will be reported at the FD10 OPO tag today.”

It was during the OPO tag up meeting later in the day that the DAT confirmation came through, passing the orbiter’s TPS as acceptable for re-entry.

When and where Atlantis lands remains questionable, with three opportunities available for landing at the Kennedy Space Center (KSC) on Friday, before Edwards Air Force Base (Dryden) and White Sands are called up as additional options on Saturday, should KSC’s weather remain doubtful on the outlook.

The weather for a KSC landing on Friday remains questionable, though a series of powerdowns have been conducted to preserve consumables, allowing for the mission to continue through to EOM+3 (End Of Mission, plus three days), if required.

Despite the clearance for entry, Endeavour will – as previously reported – remain on STS-400 standby, holding in the countdown prior to PRSD (Power Reactant Storage and Distributation) loading.

“A no-go decision (as is now officially the status) will result in a 24-hour hold in S0007, and the launch team will remain in a LON posture until completion of the de-orbit burn.

“If landing is waived off on Friday, the 24-hour holds will continue until the de-orbit burn has been completed. S0024 Hyper QD (Quick Disconnect) de-mates will be performed in S0007 post-PRSD load.”

Once stood down from STS-400 requirements, Endeavour’s role will official move to her primary STS-127 mission to the International Space Station (ISS) next month. The expected date for her rollaround to Pad 39A is pending the completion of repairs on Pad 39A, after STS-125’s launch damaged part of the SRB flame deflector and associated Mobile Launch Platform (MLP) hardware.

Sandbags and plastic tarping were used on Pad 39B, following a leakage of rain water at the base of camera mounts on the MLP raised deck.

Another hazard for Endeavour is lightning, although she is ably protected by the three giant towers that were completed for the Ares I flights from Pad 39B. However, strikes close to the pad require the testing of the shuttle systems, to check for potential electronic inference.

“A possible lightning event was detected Monday afternoon about 0.33 nautical miles from Pad B. S0018.100 lightning data collection and analysis is in work. ERB (Engineering Review Board) determined there was no event that would cause further testing.

“Severe weather continues to be a concern. Last night at 0012L, a tornado warning was issued for KSC. No damage was reported, and the warning expired at 0030L. Also detected possible lightning strikes close to the Pad A perimeter. Data collection and analysis is in work.”

Behind the scenes, preparations for STS-127 are proceeding normally, with the MOD Flight Readiness Review (FRR) already complete (13 presentations on L2).

The STS-125 IFA (In Flight Anomaly) review – and its resulting findings for the SSP (Space Shuttle Program) FRR for STS-127 – is currently being collated by orbiter departments.