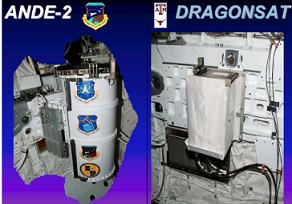 Following the conclusion of STS-127 docked phase of the mission, Flight Day 15 involved a Late Inspection survey on Endeavour’s Thermal Protection System (TPS). Meanwhile, an investigation into the foam losses from External Tank ET-131 during Endeavour’s ascent has indentified a leading candidate for why a large amount of foam shed from the Intertank.

Endeavour and her crew have enjoyed a highly successful docked mission, highlighted by the completion of the Kibo laboratory, and five EVAs – the last of which was conducted on Monday.

Following the checkout of Endeavour’s rendezvous tools, the crew departed the International Space Station (ISS) and closed the hatches between the Station and the orbiter.

After undocking Endeavour was commanded through a full lap flyaround of the station – providing stunning imagery of the ISS – ahead of the final separation maneuver/burn.

Flight Day 15 opened with the Late Inspection surveys on Endeavour’s TPS, including her port and starboard RCC (Reinforced Carbon Carbon) wing leading edges, and a full survey of her nose cap. As has been typical for the STS-127 crew, the task was completed two hours ahead of the timeline.

The results of the survey will be downlinked to engineers on the ground, as the DAT (Damage Assessment Team) check for any new areas of damage to the orbiter since the pre-docking inspections. Clearance for the vehicle to re-enter usually takes around 24 hours.

If – in the highly unlikely event – serious damage is found, Endeavour would still be able to return to the ISS, where the crew would take up safe haven until Discovery is launched as the LON (Launch On Need) rescue vehicle.

Those payloads are DRAGONSAT and ANDE-2, which are currently housed in Endeavour’s payload bay. They will be deployed on Flight Day 16.

“The payload is cosponsored and operated by Texas A&M University and The University of Texas at Austin.

“Similar to its predecessor, ANDE 2 will be flown on a shared flight as a secondary payload by the National Aeronautics and Space Administration (NASA) and the Department of Defense (DoD) STP on STS-127.

“The two goals of the ANDE 2 mission are to provide high quality satellites with stable and well-determined coefficient of drag, for calibrating techniques and models for precision orbit determination; and to provide atmospheric composition for validating Air Force sensors.”

STS-127 remains on track for a Friday landing at the Kennedy Space Center (KSC), with the Mission Management Team (MMT) discussing the landing opportunities for the first tine, now that Endeavour has departed from Station.

“No issues were raised at the meeting. The weather office provided a preliminary look at landing weather for Friday and Saturday,” noted MMT notes on L2. “They are predicting that drier air will be coming in from the Southeast and assist in setting up good landing weather.

“There is a slight chance of showers at KSC on Friday and Saturday but the weather generally looks favorable at this time. Entry Flight Director Mr Lunney will provide the entry briefing at the MMT tomorrow (Wednesday).”

As the PRCB (Program Requirements Control Board) prepare to meet on Thursday for STS-127’s IFA (In Flight Anomaly) review – a key milestone that aids the next flight’s Flight Readiness Reviews (FRRs) – the topic of ascent debris is homing in on a root cause for the ET-131 foam loss events. 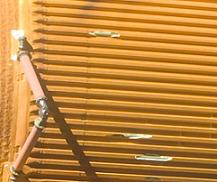 ET-131 lost several areas of foam from its Intertank region during ascent. None of the liberation events caused anything more than cosmetic damage to Endeavour’s starboard Chine.

Pull tests were carried out on ET-132, set to fly with Discovery on STS-128, all of which came back with good results on the adhesive properties between the foam and the tank’s structure.

Those results add confidence that ET-131’s foam loss events were a one-off, and are unlikely to repeat on ET-132 or other downstream tanks.

“Foam Loss Investigation Team Update: The Fishbone Team worked all last week and through the weekend looking to identify the possible causes and failure modes,” noted an update on the latest Shuttle Standup/Integration report on L2.

A candidate for the foam loss has been found, specifically dust, or substrate contamination, on the tank’s structure ahead of the application of foam.

“The failure mode is being attributed right now to the low-to-no foam bottom-line integrity in their focus and on the failure modes observed on ET-131, which was foam loss with exposed primer. No one has said they didn’t see any primed surface yet. 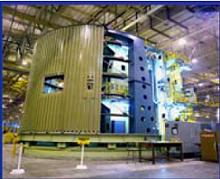 “Right now the most likely causes are substrate contamination (e.g., dust) prior to foam application. Looking at cleaning and primer touch up processes, which all are in Cell G (at the Michoud Assembly Facility).

“Other observations/findings to date are: No obvious violations to process found in paperwork. Some of the cleaning techs during that time were new employees, although certified and trained. Had a large amount of primer touch up.

First intertank sprayed after return-to-flight. Tank sat around plant and was moved several times. Did paper spray on tank prior to checking out the cell.

“Later this week, are looking to have a package to bring forward on the most likely causes to start briefing the communities and the independent review team.”

It is understand that a root cause is not required for STS-128’s Flight Rationale at the FRRs, although understanding the reasons behind the foam loss would allow for the swift closure of the IFA.

STS-128’s SSP (Space Shuttle Program) FRR will take place at the Johnson Space Center on August 11 and 12, before the STS-128 Agency FRR, on August 18, will confirm the launch date.