Endeavour lands back in Florida – Ice noted during FCS checkout 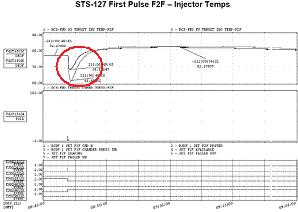 Endeavour has concluded her STS-127 mission by returning to her home base at the Kennedy Space Center (KSC) in Florida. She landed at 10:48am local time on Flight Day 17 of the highly successful mission to the International Space Station (ISS). One item of interest – relating to observed debris near the vehicle – was been cleared by managers ahead of re-entry.

Following the clearance of the orbiter’s Thermal Protection System (TPS) by the Damage Assessment Team (DAT), Endeavour had two opportunities to land on Friday – both at KSC.

The first opportunity was taken, which called for a deorbit burn at 9:42am Eastern for a landing at 10:48am. Only KSC – the preferred landing site – was made available for Flight Day 17, with Edwards Air Force Base and White Sands added to the list on Flight Day 18. Sunday opportunities would have only been used in the event of a technical wave off on Saturday.

This is a nominal timeline for bringing an orbiter home, with consumables limited by LiOH canister (CO2 scrubbing) availability on board the orbiter for a +2 EOM (End Of Mission) schedule.

However, it was during the Flight Control Surface (FCS) checkouts that one thruster – F2F – behaved off-nominally. This incurs no mission impact, due to redundancy and lack of use during re-entry.

“All 38 RCS jets were fired at least twice for at least 0.240 seconds per pulse with the exception of F2F. All thrusters have now been fired.

“F2F Failed Off on the first attempted pulse. Failure was annunciated by RM at 211/08:48:51 GMT. Jet is a third priority and not required for entry.”

Debris was also photographed by the crew during the FCS checkouts, although it is not understood to be anything other than ice.

Evaluations of the images on the ground have ruled out a similar incident to that observed by Discovery during the same checks on STS-124 – when a Rudder Speed Break (RSB) tab liberated from the aft of the vehicle.

Fleet-wide checks of that particular piece of hardware have since been carried out. 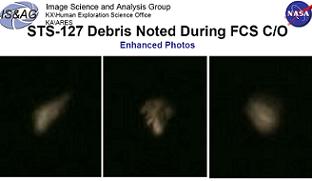 “Imagery of Debris During FCS Checkout,” noted one MMT presentation by the Orbiter Project Office. “Taken by the Crew with hand-held still cameras. Imagery reviewed by DAT (Damage Assessment Team) and can not associated with Orbiter hardware.”

Update: This has since been classed as ice.

Endeavour continues to perform extremely well, with only a handful of issues noted on the Mission Evaluation Room (MER) “funny” list, most of which are not specific to the orbiter herself.

“Loss of HUD Mini-cam Video (Bad Cable). Initially could not get HUD video. The crew eventually found the faulty cable and routed around it. Should be no impact,” was one example of the latest “funny” to make the list.

The Late Inspections provided a clear assessment of the vehicle’s TPS health during the docked phase of the mission, and confirmed a very “clean” orbiter. This resulted in the DAT engineers to allow the Mission Management Team (MMT) to give a go for re-entry.

“Overall coverage was very similar to the ‘as-designed’ coverage. The few areas that had slightly worse predicted coverage (some carrier panel tiles and a small section of the nosecap) were previously cleared or had adequate coverage, just less than ideal angle of incidence,” noted the DAT assessment notes on L2.

“The Imagery Analysis team has reviewed all of the images and the LESS/RCC team has cleared all late inspection regions of interest, giving a ‘GO’ for re-entry. This data was presented at the OPO (Orbiter Project Office) and MMT meetings, who concurred with the ‘GO’ for re-entry.” 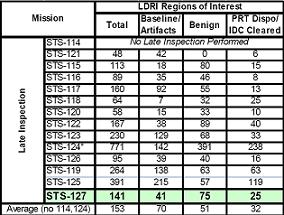 A total of 141 Regions Of Interest (ROIs) were observed on Endeavour’s heatshield, which is below the average of 153 per flight – an average based on OBSS (Orbiter Boom Sensor System) availability since Return To Flight.

Also notable was the lack of triggers on the Wing Leading Edge (WLE) Impact Detection System (IDS), a suite of sensors embedded into the leading edges of the orbiter’s wings which are used to “feel” any impact on the WLEs. The system is mainly used for ascent, but can also be used for on orbit monitoring for potential MMOD impacts.

During the latest monitoring phase – called for during Late Inspections – no triggers were noted.