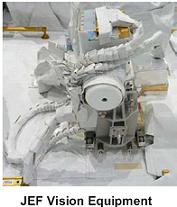 STS-127 has concluded it’s fifth and final EVA, following the pacy completion of EVA-5’s tasks.  Meanwhile, at Launch Pad 39A, engineers have completed turnaround procedures to prepare the pad for the arrival of the STS-128 payload on Friday and Discovery early next week.

As is the case with the ever-changing nature of manned space exploration, changes to planned mission timelines are a routine occurrence.

Given the highly complex nature of the STS-127 assembly mission to the International Space Station (ISS), EVA-5 was planned into the mission timeline to be a catch up day for any mission EVA (Spacewalk) objectives that, for whatever reason, could not be accomplished in their originally planned slots.

This concept has proved to be invaluable for astronauts Chris Cassidy and Tom Marshburn, who completed the mission’s fifth and final spacewalk on Monday.

Working on a revised EVA schedule, Marshburn and Cassidy were tasked with installing a patch on a panel on the Z1 truss (Cassidy) and removing covers from Canada’s Special Purpose Dexterous Manipulator (Marshburn).

They also installed the forward and aft cameras (or Vision Equipment as they are called) on the Japanese Exposed Facility (both Cassidy and Marshburn), and were set to move the S3 Zenith Outboard PAS into its deployed cofiguration.

However, that latter task was deleted during the EVA due to a 5 hours 30 minutes restriction on Cassidy’s METOX limitations. The PAS task would have taken 90 minutes to complete, as a get-ahead task. Several foot restraint tasks – in order to help STS-128 – were completed instead.

The contents of EVA-5 had to be replanned primarily because of delays encountered during EVA-3 and the P6 truss battery R&R (removal and replacement) activities.

EVA-3 was supposed to see the R&R of four P6 batteries with EVA-4 seeing the completion of the battery R&R (two batteries) and other scheduled tasks.

However, after just two batteries had been installed on EVA-3, the spacewalk was terminated due to rising CO2 (Carbon Dioxide) levels in Chris Cassidy’s spacesuit.

Therefore, EVA-4 was devoted to the completion of the battery R&R with other previously planned tasks for EVA-4 slipping into EVA-5.

To accommodate these objective into EVA-5, several get-head tasks originally planned for the spacewalk were deferred until a later time. EVA-5 was set to be scheduled for about six and half hours in duration, but ended after 4 hours and 54 minutes – due to great progress on the opening tasks and the METOX limitation.

As noted previously by this site, Shuttle Mission Managers discussed a potential issue with Endeavour’s Fuel Cell 3 (FC-3) in the hours before her launch on July 15.

These tests indicated that FC-3 could be operated at the lower power level without causing “cell flooding.”

However, as Mike Moses, chairman of the pre-launch MMT at the Kennedy Space Center, explained during a pre-launch interview on Wednesday, “At the pad, water was cycled through the Fuel Cell to verify that we could transfer for drinking water. If we don’t drain the water, it’ll build up. Too much water would let the electrolyte compound (KOH) into Fuel Cell and end up drying out the Fuel Cell,” which would render it inoperative.

Furthermore, Moses explained that “We can’t monitor the exact KOH concentration on orbit, but we can on the ground. When we run the SSPTS system on orbit, it takes off a lot of the load from the Fuel Cells. That means we don’t dry the fuel cells out enough and the temperatures in the Fuel Cells increase.

“If we can’t drain the Fuel Cells, then we can’t take as much power from the SSPTS and we lose some mission duration.” 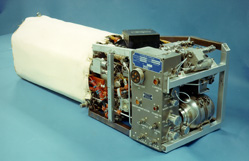 Following this assessment, the Mission Evaluation Room (MER) processed and approved a request from Electrical, General Instrumentation, and Lighting Engineer to operate FC-3 below the 29 percent KOH limit set by the Combined Environmental Test document rules.

With this new procedure, FC-3 functioned as expected until FD-8.

To preclude the possibility of another heater becoming stuck in the ‘on’ position, the load on FC-3 was increased by “taking Main C Bus Tie” to the off position.

As of FD-10, the forward plan was to perform a Main A to B Bus Tie to obtain improved power transfer abilities while still maintaining FC-3 at the higher power level to prevent heater “sticking.”

While this new issue with FC-3 was identified quickly, the stuck heater has caused an impact to Endeavour’s consumable (liquid hydrogen and liquid oxygen fuel for the Fuel Cells) status.

According to the preliminary calculations at the end of FD-9, Endeavour’s consumable status with the Station to Shuttle Power Transfer System (SSTPS) was 1-day and 22-hours above the baselined 16+0+2 day mission and 1-day above the baseline without SSTPS.

However, at the end of FD-11, that margin was down to only 22-hours above the baseline with SSTPS and 14-hours without SSTPS.

While this does not affect Endeavour’s mission at the Station, it does affect the time Endeavour can stay on orbit in the event of unfavorable weather at her landing sites or for a unforeseen systems error after undocking. 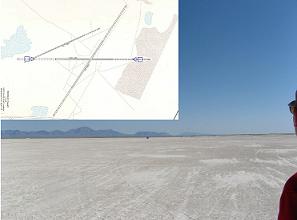 As of now, Endeavour only has two weather waive off days before her onboard fuel status (consumables) would force Flight Directors to land her at the earliest available Primary Landing Site in the U.S. (either the Kennedy Space Center in Florida, White Sands Space Harbor in New Mexico, or Edwards Air Force Base in California).

While this consumable status is perfectly acceptable – as all Shuttle flights are planned around the potential for at least two weather waive offs – Flight Directors and Mission Managers always prefer to have a little more consumable margin than just the prescribed minimum.

As such, Mission Managers do not want to violate/eliminate that two day contingency time.  As noted in the FD-10 MMT update, “Should the heater fail on permanently there will be a large margin impact and the FC3 will not be considered usable as a last fuel cell.”

As a result, a request has been submitted to further refine the acceptable KOH concentration levels for FC-3.

“Based on the Fuel Cell 3 operational data observed during the Pre-launch FC Low Power test, the Fuel Cell can be operated at lower power levels without the Condenser Exit Temperature set point causing cell flooding.  The Fuel Cell was operated over an extended period of time (~1 hr) with the calculated KOH concentration below the 29 percent instrumentation limit without any indications of cell flooding.”

Following the successful launch of Endeavour on July 15, technicians began the process of the turning Pad 39A around to prepare it for the arrival of Space Shuttle Discovery and her associated payload.

After initial pad inspections were complete, and pad repairs underway, the Mobile Launch Platform (MLP-3) that Endeavour launched off of was moved off the pad to the east refurbishment site to the north side of the VAB.

The final operations performed at Pad 39A included upper and lower jackscrew replacement on the Gaseous Oxygen Vent Arm, replenishment of the Liquid Hydrogen and Liquid Oxygen storage facilities, and SCAPE operations of various fuel meters and systems around the pad area.

As of now, Discovery’s payload (the MPLM Leonardo) is expected to arrive at Pad 39A during the early morning hours of Friday, July 31st with Discovery rolling out to the pad in the early part of the following week.