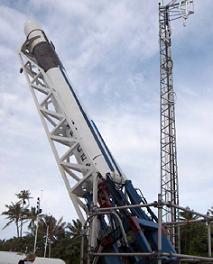 The fifth launch of the SpaceX Falcon 1 carrier rocket is underway, carrying the RazakSat spacecraft for Malaysia’s Astronautic Technology (M) Sdn. Bhd. The launch, which marks the first flight of a commercial payload aboard a Falcon rocket, was delayed to 03:35 GMT (11:35pm Eastern).

RazakSat, formerly known as MACSat, was originally scheduled to fly on the third Falcon 1, in 2006 or 2007. Its launch was delayed after several previous launches failed, but following the Falcon 1’s successful test flight last September, it is finally ready to fly.

Once the demonstration flight was completed, the RazakSat launch was scheduled for early 2009. However, just a few days before a scheduled launch attempt on 20 April, the launch was postponed due to excessive vibrations.

A mitigation system was installed in the payload adaptor, but in order to allow this to be installed, two CubeSats – which were originally scheduled to have been launched as secondary payloads – were removed. It is currently unclear if and when these spacecraft, named CubeSAT and InnoSAT, will be launched in the near future.

RazakSat was built by the Satrec Initiative and ATSB, using an SI-200 bus. It will be the first SI-200 to be launched, with the second, DubaiSat 1, currently scheduled to fly aboard a Dnepr on 25 July. It has a mass of 180 kilograms, and is expected to operate for at least three years.

Its primary mission is electro-optical Earth imaging, however it will also be used for technology demonstration and weather research. Its main instrument, the Medium-sized Aperture Camera (MAC), is designed to capture images with a resolution of 2.5 to 5 metres.

The Falcon 1 is 21 metres tall, with a diameter of 1.7 metres, and a mass of 27.67 tonnes. The first stage of the Falcon 1 is powered by a Merlin-1C engine, which will deliver 347 kilonewtons of thrust at liftoff. It will burn for about 169 seconds, propelling the rocket to an altitude of around 90 kilometres.

The first stage will then shut down, and a few seconds later it will separate by means of a pneumatic system. The first stage was designed to be recovered by parachute for reuse, however this is yet to be demonstrated. First stage recovery is not believed to be planned for today’s launch.

The second stage is propelled by a single Kestrel engine, delivering 31 kilonewtons of thrust. It will deploy RazakSAT into a circular orbit with an altitude of 685 kilometres, and nine degrees of inclination.

Whilst the flight profile has not been confirmed, the orbital parameters suggest that the second stage will have to perform two burns.

Officials from the Malaysian government, including Datuk Dr. Maximus Ongkili, the Minister for Science, Technology and Innovation, have flown to Guam, from where they will follow the launch by webcast.

Tonight’s launch is the fifth of the Falcon 1, since its maiden flight in March 2006. The first three flights all failed, before a successful demonstration flight was conducted last September. The first launch was to have placed the FalconSat-2 satellite into orbit, however a fuel leak caused by corrosion led to the rocket falling into the Pacific Ocean little over a minute after launch.

Almost a year later, a demonstration launch also failed, this time due to a chain of events beginning with an incorrectly set fuel ratio, leading to recontact during staging and fuel slosh in the second stage that left the rocket unable to achieve orbit.

Despite the setback, SpaceX claimed that most test objectives were completed successfully, and the Falcon 1 was declared operational. The third launch, which took place in August 2008, carried an Operationally Responsive Space payload for the US Department of Defense.

The satellite, named Trailblazer, was selected just a few weeks before the rocket was scheduled to launch, which was at the time in June. Two NASA CubeSats, Nanosail-D and PreSat were also aboard, and a space burial payload for Celestis which carried cremated remains from a number of people, including astronaut Gordon Cooper and Star Trek actor James Doohan, was attached to the second stage.

During stage separation, residual thrust from the first stage resulted in recontact between the stages, sending the rocket out of control when the second stage ignited, and resulting in another failure. This residual thrust was determined to have been the result of the replacement of the ablatively cooled Merlin-1A engine used on the previous flights with the regeneratively cooled Merlin-1C engine.

Due to a contract requirement between SpaceX and ATSB that the Falcon 1 conduct a successful launch prior to being entrusted with RazakSat, a demonstration flight was hastily scheduled, using the rocket that was intended to carry RazakSat.

This became the first privately funded and developed liquid fuelled rocket to successfully reach orbit, when it launched on 28 September. A dummy payload, known as RatSat, was placed into a low Earth orbit, where it remained attached to the upper stage.

The Falcon 1 will launch from Omelek Island, part of Kwajalein Atoll in the Marshall Islands. Omelek has been the site of all previous Falcon launches, although an attempt was made to fly from Space Launch Complex 3W at Vandenberg Air Force Base in California, USA.

This launch attempt was scrubbed, and SpaceX later decided against making further launches from Vandenberg. The current status of the payload that it was scheduled to carry, TacSat-1, is unclear.

SpaceX’s next scheduled launch is the maiden flight of the larger Falcon 9, which is currently scheduled to be conducted in November. The Falcon 9 will be launched from Space Launch Complex 40 at Cape Canaveral, a pad which was originally built for the Titan rockets.

The flight is officially scheduled to be a demonstration mission, with no payload, however there has been some speculation that a US Government payload may be launched instead. If the maiden flight is successful, another launch is planned for January, with the first COTS demonstration flight of the Dragon spacecraft.

The next Falcon 1 launch is manifested is the debut flight of the larger Falcon Ie, and is scheduled to launch in about a year’s time.