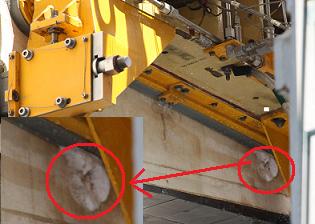 Shuttle orbiter Endeavour was again ready to launch to the International Space Station. However, poor weather again put pay to the fifth launch attempt for STS-127, moving launch to Wednesday. Meanwhile, the results of the Ground Umbilical Carrier Plate (GUCP) investigation appear to have been validated via Sunday’s leak-free “near-complete duration” tanking.

With two delays caused by a leak of Endeavour’s External Tank (ET-131) at the GUCP, followed by two weather related delays Endeavour was running out of time to make her trip to the ISS  – prior to standing down for the Russian Progress launch.

“Launch countdown: Saturday the Mission Management Team (MMT) delayed launch for 24 hours due to Lightning Strikes. Sunday the MMT gave the go for launch but a scrub was called due to weather violation for Return to Landing Site (RTLS). 24 Hour Scrub Turnaround.

The weather was once again an issue for Monday’s attempt, with forecasts noting a 60 percent constraint to launch by the time STS-127’s countdown reaches T-0. Also, rain during the launch countdown would be very problematic for an exposed tyvek cover – as noted in attempt 4’s article.

With the delay to Wednesday, the Rotating Service Structure (RSS) will be placed back around the vehicle for a replacement of the cover.

Water intrusion into the thruster holds the threat of freezing during ascent, which could cause problems for its operation on orbit. However, it was the weather in the local area for around T-0 that resulted in another scrub being made official.

The main notes on the MER list related to findings by the Ice Inspection Team – which had arrived at the pad to look at all areas of the shuttle after tanking had entered stable replenish.

During the hold ahead of T-9 minutes, a waiver was issued to allow the vehicle to proceed to launch.

Another issue related to a Freon (coolant) loop in Pad 39A’s Ground Coolant Loop Resevoir Level. However, this is a known condition, as an existing GSE PR (Problem Report) on the freon leak was noted.

A problem with a chiller pump at the pad was also not going to be a cause any problems for the remainder of the count.

While Wednesday was originally unavailable due to the Progress launch, NASA had appeared to have used an option to negotiate the extension of STS-127’s window by a day with the Russians, and/or reduce mission content in order to have a final opportunity available on Thursday – if approved by the MMT.

One benefit of Sunday’s – and indeed Monday’s – scrub was the confirmation the GUCP troubleshooting plan appears to have worked, with no leaks detected throughout the countdown, up to the point of polling to come out of the T-9 minute hold. 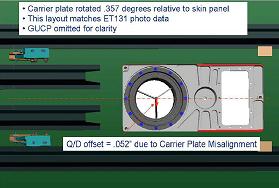 This provided additional confidence – following the tanking test at the start of the month – that the engineering work on correcting what was an alignment issue of just 0.357 degrees in the counter-clockwise direction, has been successful.

The amount of work that went into fixing the issue can be seen in a 47 page presentation to the all-powerful Program Requirements Control Board (PRCB), dated July 7 and acquired by L2.

“The objective of the overview – to identify the configuration that allows us to proceed to a launch attempt with very high confidence of success.”

Engineers were tasked with checking historical issues with the hardware, in order to attempt a root cause analysis of not only ET-131’s leak during STS-127’s opening two countdowns, but the leak on the opening launch attempt of STS-119 with ET-127. 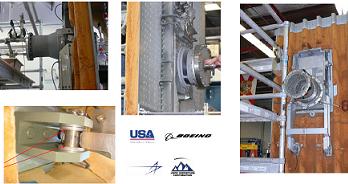 They were also asked to present the worst case outcome of the potential scenarios surrounding a problem with the GUCP hardware.

“Worst case effect/risk vary with individual scenario: Could result in an improper function of the vent line (leakage of flammable hydrogen external to the ET), resulting in a launch scrub.

Following an extensive review, engineers confirmed the misalignment was to blame. However, the a flight seal issue – since replaced with a “more forgiving” two-part seal – may have also contributed.

The solution, which included replacement of the aforementioned seal, involved new feet being installed on the GUCP, to avoid misalignment potential out at the pad.

The modifications noted will now be implemented on ET-132 (for STS-128) and all downstream tanks that are yet to arrive at the Kennedy Space Center (KSC) from their manufacturing base – the Michoud Assembly Facility (MAF) in New Orleans. 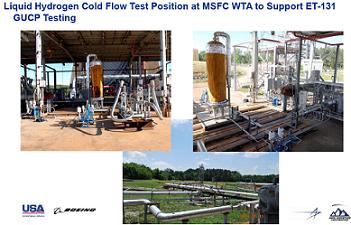 Although this forward plan included flight rationale to the Mission Management Team (MMT) for STS-127’s tanking and launch, the investigation will continue, given the findings do not provide a clear root cause for STS-119/ET-127’s leak.

This will include further work at the test facility at the Marshall Space Flight Center (MSFC).

“ET-131 mitigations do not invalidate certification or hazard controls. Continue investigation to determine the sensitivity of this interface to off-nominal geometry for future tanks, other contributing factors, and finalize long-term changes to preclude leaks.

However, images of ET-127’s flight seal – which was replaced with a similar spare for STS-119 – shows the leak was likely caused by a faulty seal, with several anomalies observed on its edges.

“Seal edge inspections showed that the compression band formed on the seal edge by bellows probe contact was sporadically inconsistent around the entire circumference of the seal. Areas of wide, rolled, jagged, thin & wavy contact were all observed.

“Dents and gouges were also evident around the entire circumference of the seal edge.”

Given ET-131’s first flight seal only suffered from a few rolled edges – likely caused by the misalignment – ET-127’s leak is probably related to a specific fault with its flight seal, which in turn adds confidence ET-131’s issue was mainly via the now-solved misalignment problem.

For live updates of launch attempt 5 – refer to the live update pages, linked above.