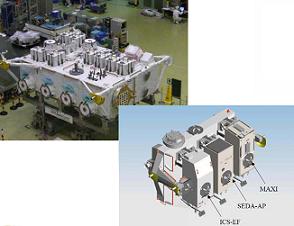 Endeavour’s Dave Wolf and the ISS’s Tim Kopra ventured outside the Shuttle/Station complex on Saturday and completed the first of five EVAs (spacewalks) scheduled for the STS-127 mission.  Meanwhile, the Mission Management Team (MMT) continues to monitor the Potassium Hydroxide (KOH) levels and operating temperature of Fuel Cell 3 on Endeavour as the docked portion of the Orbiter’s mission begins.

Following the planned order of EVA tasks, Wolf and Kopra, after egressing from the Station’s Quest airlock, translated (moved) to the end of the JEM where they prepared the Active Berthing Mechanism for the installation of the JEF during the latter stages of the spacewalk.

During this procedure, Wolf and Kopra jettisoned the cover of the Active Berthing Mechanism into space.  Pre-mission trajectory calculations indicate that the release of this cover (and five others throughout EVAs 1-3) will not violate the “200m Keep-Out-Sphere” around the Station as mandated by the ISS Jettison Policy.

Furthermore, the jettison of these covers will not interfere or impinge upon Shuttle operations following Endeavour’s undocking from the Station late in the mission (or earlier should contingency requirements mandate).

Following the jettison of this Multilayer Insulation cover from Berthing Mechanism, Wolf and Kopra removed the grounding tab around the JEM Remote Manipulator System (RMS) before moving to Endeavour’s Payload Bay to reconfigure the JEF and the LTA on the Integrated Cargo Carrier-Vertical Light-weight Deployable payload.

After their work in Endeavour’s Payload Bay was completed, Wolf and Kopra then relocated themselves to the Node-2 (Harmony) module of the ISS where they reconfigured a CBCS flap on the zenith side of the module.  This was followed by a reconfiguration of a Crew and Equipment Translation Aid (CETA) cart on the truss of the Space Station.

To accomplish this task, the SSRMS first grappled the JEF and pull it out of Endeavour’s Payload Bay.  Then, the JEF was handed off to the Shuttle RMS while the Station RMS was relocated to the Node-2 (Harmony) Mobile Base System.

Following this relocation, the JEF was handed back to the Station RMS.  Then, the robotics officer at the SSRMS working Station in the Destiny Science Lab of the ISS maneuvered the SSRMS with the JEF to the installation point on the JEM and gently guided the JEF to its permanent location on the exterior of the Station. 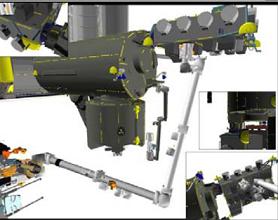 After final alignments were confirmed, the JEF was then berthed to the JEM and docking latches secured to ensure a proper attachment of the JEF to the JEM.

The UCCAS (Unpressurized Cargo Carrier Attachment Systems) reconfiguring was a success, thanks to a special detent tool that designed for allowing the freeing of a hinge that had proved troublesome during STS-119.

Finally, following the completion of EVA-1 and the ingress of Wolf and Kopra into the Quest airlock, the 2B power channel on the Port truss of the ISS will be deactivated in preparation for the P6 truss batteries removal and replacement activity later in the mission.

Furthermore, as has been seen on the previous two Station missions, Endeavour’s spacewalking astronauts used the new style gloves during all five EVAs, as outlined in the STS-127 Flight Readiness Review (FRR) EVA documentation, available on L2.

These gloves were previously used on STS-126 in November 2008 and on STS-119 in March of this year with no issues discovered during post-flight inspections.

The new gloves were introduced for all Station spacewalks following several instances of cut or damaged gloves on Shuttle/Station missions in 2006 and 2007.

However, while any and all positive cryo margin is welcome, this is not the main area of concentration for the MMT (Mission Management Team) regarding Endeavour’s Fuel Cells. 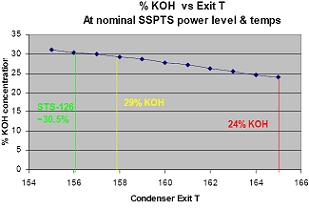 In fact, the MMT is keeping a close eye on Fuel Cell-3 (FC-3) – specifically the KOH values in that Fuel Cell.

These tests indicated that FC-3 could be operated at the lower power level without causing “cell flooding.”

However, as Mike Moses, chairman of the pre-launch MMT at the Kennedy Space Center, explained during a pre-launch interview on Wednesday, “At the pad, water was cycled through the Fuel Cell to verify that we could transfer for drinking water.  If we don’t drain the water, it’ll build up.  Too much water would let the electrolyte compound (KOH) into Fuel Cell and end up drying out the Fuel Cell” which would render it inoperative.

Furthermore, Moses explained that “We can’t monitor the exact KOH concentration on orbit, but we can on the ground.  When we run the SSPTS system on orbit, it takes off a lot of the load from the Fuel Cells.  That means we don’t dry the fuel cells out enough and the temperatures in the Fuel Cells increase.

“If we can’t drain the Fuel Cells, then we can’t take as much power from the SSPTS and we lose some mission duration.” 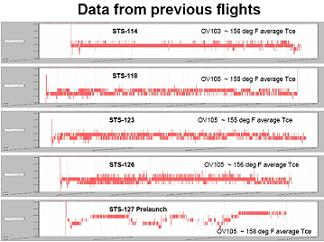 Currently, the MER (Mission Evaluation Room) is processing – and working to approve – a request from EGIL (Electrical, General Instrumentation, and Lighting Engineer) to operate FC-3 below the 29 percent KOH limit set by the Combined Environmental Test document rules.

As of now, FC-3 is functioning as expected and Endeavour’s mission is proceeding as planned with Endeavour drawing power from the Space Station’s solar arrays and batteries.

Nevertheless, the Fuel Cells are a vital component of the Orbiter as they provide all the electrical energy necessary to operate the vehicle.  As such, Flight Rules state that all three Fuel Cells have to be operating properly for a Shuttle mission to continue as planned.

Should, for whatever reason, FC-3 become inoperative, Endeavour’s crew would be forced into a Minimum Duration Flight situation – accomplishing only the Crit I objectives of the mission before undocking from the Station and landing on the first available opportunity in the United States.