The Mission Management Team (MMT) have declared they require more time to evaluate data from overnight lightning strikes on the pad. STS-127 was tracking a Saturday evening launch attempt (7:39:35 pm local) to the International Space Station (ISS). The next launch attempt will take place on Sunday, pending engineering data on the strikes.

STS-127 is the 127th space shuttle flight, the 29th to the station, the 23rd for Endeavour and the third in 2009. Endeavour’s flight will deliver the final components of the Japan Aerospace Exploration Agency’s (JAXA) Kibo laboratory to the ISS.

The 16-day mission will include five spacewalks and the installation of two platforms outside of the Japanese module. One platform is permanent and will serve as a type of porch for experiments that require direct exposure to space. The other is an experiment storage pallet that will be detached and returned with the shuttle.

Endeavour also will deliver Tim Kopra – who will stay on Station until STS-128, while Koichi Wakata – who arrived on the orbital outpost with Discovery on STS-119 – will return to Earth at the conclusion of STS-127.

Processing had been proceeding to plan, with RSS retract occurring exactly on the timeline at 11pm Friday night.

Only two minor items made the IPR (Interim Problem Report) list, one relating to the TAL (Transatlantic Abort) site – which will be resolved by Saturday morning.

The other issue related to an engineer accidentally catching a switch in Endeavour’s crew cabin – which is usual, due to the tight workspace technicians have to negotiate on the flight deck.

“These breakers are OPEN for flight and are located next to each other. Will have them repositioned OPEN per the IPR.”

Upcoming processing milestones included the activation of the Fuel Cells at 4:34 am local time (complete), prior to the countdown entering the 2-hr hold at T-6 hour mark at 8:14 am (complete). 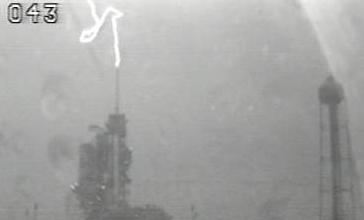 The MMT had to wait until 10 am local time for a weather update to aid their evaluations into up to 11 lightning strikes on the pad overnight, in order to give a go for tanking.

However, with more data required on Endeavour’s electrical systems, managers decided to hold for 24 hours, with another attempt to take place on Sunday.

“Took eleven strikes within the 0.3 miles of the pad,” noted MMT chair Mike Moses. ” If a strike comes into the .3 NM radius, kicks off a formal review of the strike, determine if the strike was big enough to declare a lightning event, then we go from there.

“Just because we had strikes in the .3 NM, doesn’t mean it was a formal event.”

The Space Shuttle Main Engines (SSMEs) and External Tank have had their systems cleared. However, the orbiter and the Solid Rocket Boosters (SRBs) are still being evaluated.

Managers have decided against the removal of an area of cracked foam from ET-131’s LO2 Feedline, after it was deemed such a procedure could actually increase the debris potential during Endeavour’s ascent. 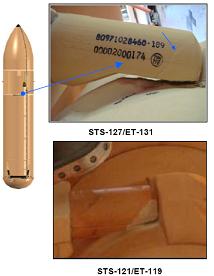 The cause of TPS crack is understood to be related to the third detanking of ET-131 – which occurred after the successful tanking test at the start of the month.

“Ice formed during tanking creates an interference at the strut to monoball interface,” explained the presentation. “Loads induced during detanking cause cracks. Inherent to the design.”

The initial plan was to trim the area of TPS, thus removing the foam that has the potential to liberate during ascent. However, the decision to fly “as is” was made easier by confirmation such a foam liberation would hold no threat to Endeavour, due to its small mass.

“TPS liberation does not impact structural requirements. TPS only required to preclude ice formation. Procedure for TPS removal not defined, vetted, or practiced by technicians. Risk of collateral damage during removal process

Endeavour has a four day launch window, prior to a standdown to allow for the launch of the next Russian Progress resupply ship. The opening attempt for Endeavour on Saturday only has a slim chance of finding acceptable weather conditions, with a 60 percent likelihood of thunderstorms in the 20 mile radius.

“The surface front will be in the Central Florida area on Saturday. The upper-level trough will begin to migrate northeast, but early afternoon showers and thunderstorms will develop along the sea breeze, and the front in the area will act as an added trigger for these storms,” noted the USAF weather forecast for the area.

“Most of the activity will occur before the launch window, but weather may still be in the area by launch time. Our primary concerns for launch are showers and thunderstorms within 20NM of the Shuttle Landing Facility (SLF) and anvils.”

Such has been the poor weather in the KSC area, a lightning strike has hit the ground within five miles of Pad 39A on every evening since July 3rd. A direct strike was suffered by the pad on Friday, hitting the Fixed Service Structure (FSS) mast – which resulted in no ill effects to Endeavour.

The weather forecasts show a slight improvement for a Sunday launch attempt.

This article will be updated during the countdown. Refer to live update pages – linked above – for up to the second updates.