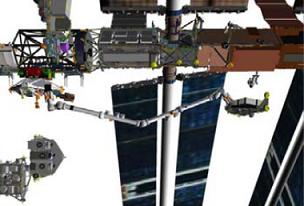 Chris ‘Chuck Norris’ Cassidy and Tom Marshburn have completed EVA-4 to finalize the replacement of the P6 batteries, following the earlier termination of EVA-3. Meanwhile, a Russian Progress resupply vehicle has launched from the Baikonur Cosmodrome in Kazakhstan, carrying 2.5 tons of cargo to the International Space Station.

The Russian Progress M-67 resupply vehicle launched just prior to 3pm local time on Friday, following a smooth countdown and the usual efficiency of Russian engineers, who could be seen calmly milling around the pad at T-10 minutes, before returning just two minutes after launch.

Included in the cargo ship’s supplies are more than 1,900 pounds of propellant, just over 100 pounds of air and oxygen, almost 250 pounds of water, and around 2,800 pounds of dry cargo.

The cargo runs are even more critical to Station now it has six permanent crewmembers on board.

The Japanese HTV cargo vehicle is due to debut its resupply role in a few months, added to the next flight of the European ATV, as cargo runs increase in preparation for the retirement of the shuttle in 2010 – although it is now “likely” the shuttle program will be extended (article will be published soon).

A shuttle extension would not impact on the resupply missions in the next decade by SpaceX and Orbital under the Commercial Resupply Services (CRS) contract, such is the logistical hunger of the ISS.

The mission continues to progress through the timeline, with its mix of transfers, robotics and spacewalks – the latter proving to be the only element that is currently behind its pre-planned schedule.

Flight Day 9 concentrated on the robotics side of the mission, with the robotic arm on the Kibo module put to good use to transfer three science payloads on to the JEF (Japanese Exposed Facility).

Those payloads – which arrived on Station via Endeavour – are the (Monitor of All-sky X-ray Image (MAXI), Space Environment Data Acquisition equipment – Attached Payload, or SEDA-AP and Interorbit Communication System (ICS), which were moved from the Japanese Exposed Section, ahead of being stowed back on Endeavour at the weekend for a return back to Earth.

Flight Day 10 concentrated on EVA-4, conducted by Cassidy and Marshburn, focusing soley on the priority task of replacing the four remaining batteries in the Port 6 truss integrated electronics assembly.

Friday’s spacewalk was literally all about finishing the P6 battery task, following the termination of EVA-3 slightly earlier than planned due to higher than nominal concentrations of CO2 building up in Cassidy’s EMU.

Cassidy, a Navy SEAL, was jokingly tagged as “basically Chuck Norris minus the restrictions of gravity,” in a joke flight rule presentation sent up to the crew, and ironically it was his impressive military training background that probably caused the CO2 spikes, as he sped out of the Quest Airlock – showing no fear and a bit too much excitement – on his debut spacewalk.

While the LiOH canister – which aids the removal of CO2 concentrations from the EMU – was changed out and will be inspected back on the ground, Cassidy was told to take EVA-4 at a more relaxed pace. He still suffered some elevated CO2 levels during the spacewalk.

Given only two batteries were installed on to P6 during EVA-3 – when four out of a total of six were scheduled – it was hoped EVA-4 would complete the priority task – and that was officially the case after around six hours duration into the spacewalk.

The status heading into EVA-4 saw the P6 with two new batteries already installed, with a third safely stowed as EVA-3 was called to an end. Three of the old P6 batteries were also successfully removed and stowed in their temporary home on External Stowage Platform 3 (ESP3), meaning the task is about half way complete by the time the EVA-4 spacewalkers arrive at the worksite. 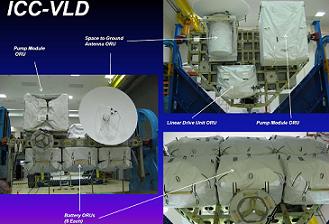 The new batteries were transferred from the ICC-VLD (Integrated Cargo Carrier – Vertical Lightweight Deployable), which is grappled by the SSRMS (Space Station Remote Manipulator System) “Canadarm2”.

“The new batteries are lettered A-F. The old batteries on the Integrated Electronics Assembly (IEA) are numbered 1-6,” noted the Flight Plan Walkthrough on the Battery R&R procedure.

EVA-4 picked up with the installation of Battery C into the IEA. It took around one hour before the spacewalkers are in the correct configuration to restart the R&R tasks.

“During the Battery R&R, the SARJ (Solar Alpha Rotary Joints) will be prohibited from rotating. Post EVA, the SSRMS will maneuver to a SARJ clear position, to allow the SARJ to rotate again.”

The successful completion provides the STS-127 crew with the ability to utilize EVA-5 – which will take place on Monday – to its maximum capability.

No major issues are being worked on Endeavour, with items relating to an OCA Router Harddrive failure, and a Left OMS Engine GN2 Leak all holding no mission impact for STS-127. 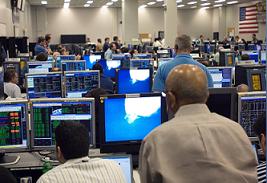 The latest issue reported by the Mission Evaluation Room (MER) relates to Fuel Cell 3. Again, no mission impact is expected.

“Fuel Cell 3 sustaining heater came on for 21 minutes should be 3 to 4 minutes,” noted the latest addition to the MER “funny” (denoting small issues) list. “MOD EGIL (Electrical Generation and Illumination Engineer) broke the B to C bus tie which removes the direct connection to SSPTS (Station- to-Shuttle Power Transfer System).

“Vehicle is in safe and stable configuration. EGIL is currently assessing options on forward plan.”

Flight Day 11 is a planned Crew Off Duty Day, although some robotics is planned with Canadarm2’s grapple and handoff of Japanese Exposed Section to Shuttle robotic arm for berthing in Endeavour’s Payload Bay.

Transfer of equipment and payloads from Endeavour to Station will continue, as over 2,000lbs of upmass is added to the ISS’ supplies.

More will follow during the EVA. For live up-to-the-second updates, refer to the live coverage link above.