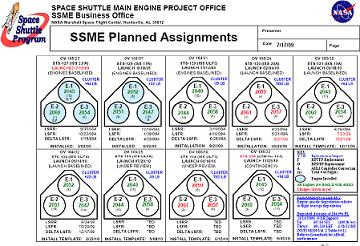 With the key decision points for the Augustine Commission fast approaching, one of the favorite alternatives to the Ares vehicles – the SD HLLV (Shuttle Derived Heavy Lift Launch Vehicle – or HLV for short) – has made great strides towards becoming a viable option for replacing the Space Shuttle.

The task of evaluating the HLV as a potential alternative path – to that of continuing the development of the Ares I vehicle – was handed to Space Shuttle Program (SSP) manager John Shannon, who built a team to work on refining the vehicle concept’s data, on behalf of the US Human Space Flight Review Committee.

The vehicle, side mounted to the current design of the External Tank, is a true Shuttle Derived concept, with heritage from a previous concept known as Shuttle-C.

The HLV is – on paper at least – capable of launching 80mt (metric tons) into Low Earth Orbit (LEO) and around 54mt to the moon.

Due to the relevance of the concept to the current shuttle teams, Mr Shannon has been providing twice weekly updates on the HLV’s evaluations via the Shuttle Standup/Integration reports (available on L2). Those updates have shown a large amount of understanding has been added to the concept’s database over just a one month period.

“Want to add a new topic that we report on at Shuttle Standup, which is the work that has been going on the HLV. There is a lot of interest throughout the Program on that work, and what we are providing as a Program to the Augustine team,” noted Mr Shannon in his opening addition to the Standup reports.

This note came after just a few week’s worth of work on the concept, ahead of the opening address to the Augustine Commission on the HLV – which was made by Mr Shannon himself.

“Have been working with the Ralph Rowe team (head of NASA’s Engineering and Safety Center – NESC), which is the technical lead under Mike Hawes (involved with the Augustine Committee) for looking at how they might support the Committee,” added the opening notes on the Standup report.

“After a couple of weeks they matched us closely. That was reported back to the Hawes Committee in Huntsville. They liked the information and want to follow on with it. We had looked at primarily a cargo vehicle; they had asked us to look at a maybe a crew vehicle and what kind of capability we would have with that side-mount.

“They had also asked for some costing information, which has been a request to the Program.”

The opening work on refining the computational models and data for the crew version of HLV related to the safety of aborts – a subject that has ironically become more of a problem for Ares I of late.

Work was also undertaken on other shuttle-related elements of the vehicle, such as the Space Shuttle Main Engine (SSME) inventory – with a potential path to “use up” the current shuttle stock, before heading to a purpose built disposable engine.

“The biggest issue with the crew vehicle has been the aborts, and we put together a team work on abort scenarios for a crew vehicle and are starting to collect information to do a costing on manifesting options and so forth,” added Mr Shannon’s early notes.

“Help has been requested and received from Engineering. MOD is looking at how they can help. We will probably be talking to the projects in particular about the engines, inventory, and replacement options.

Mr Shannon also noted the time constraints in turning around the evaluations into a refined proposal that the Augustine Commission could use in their deliberations. It is likely that a baseline will be overviewed by the Commission, with further work to be conducted if the HLV is opted as the best forward path.

“This is a fairly short turn around activity. We don’t expect to have all the answers by the time Augustine finishes up. We will identify areas that need additional work. (Managers) may come round for some help from your Project. This falls in priority right below flight support activities, but if you could help out that would be good. We are getting inundated with requests for data. We’ll do the best we can.”

A Month Of Progress:

With another presentation drawn up by Rick Manella – on behalf of the Rowe team – just one week after the presentation to the opening Augustine Commission public meeting, a baseline refinement process picked up the pace. 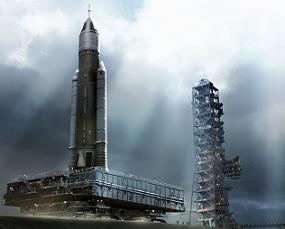 The work focused on costs, schedules, performance and safety – with the Aerospace Corporation also conducting their own review, in tandem with the other alternatives of the EELV vehicles (Atlas V-Heavy and Delta IV-Heavy), plus the Direct “Jupiter” vehicle concepts.

“Are continuing to mature data, primarily in the abort analysis and cost analysis. The white paper put together by ESMD (Exploration Systems Mission Directorate) regarding abort is being reviewed,” added a July 7 notes. “A tag-up will be held to discuss the abort plan.

“Mr. Shannon confirmed that the NASA team has completed the performance assessment. He asked which team will perform the cost and schedule work. We are looking at preparing our cost data basically in-house, and we have not gotten into what Aerospace is looking at.”

Another meeting at the Marshall Space Flight Center (MSFC) discussed the required hardware for the HLV, with concerns raised by the looming deadline for the ability to build additional (shuttle) External Tanks at the Michoud Assembly Facility (MAF).

“Thanks to the MSFC Projects for being gracious hosts. It was a very successful trip. Identified some (areas of interest) to work with. Most discussion was around the SSME and remaining inventory, and what a replacement might look like, schedules, etc,” added July 22 notes.

“The biggest concern, identified during discussions with ET, is we’re right on the cusp of disposing of some ET hardware that could be easily available for several options.

“We would like to figure out how to handle that. (Will work on) ET hardware (availability) because we should not disposition stuff that could potentially allow us to produce additional tanks that come into play or fold into a more derived type of vehicle.”

Another meeting was then held with Vision Analytics on the cost data for the HLV, before the findings on the abort were completed to a preliminary level – with parallel work conducted on the abort plans and MOD’s overview of how to utilize HLV’s flights to the International Space Station. 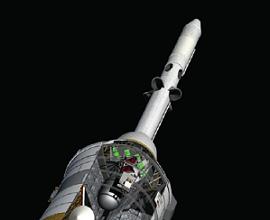 “The first cut of abort analysis for HLV has been completed using the launch abort system (LAS) being developed by the Constellation Program (CxP). No show stoppers were found,” added another note on a recent Standup report.

“The first look at Control Operations (Con Ops) that MOD is helping develop for HLV going to the International Space Station.

“Worked with the Business Office. They did an outstanding job of presenting some cost scenarios. HLV continues to expand our board analysis. Continue to develop a concept of operations.”

Returning to the hardware and logistical requirements of switching to the HLV, the first week of August involved inventory and costings work for the existing shuttle hardware manifest, and a review of the associated subsystems.

“Are continuing review of the subsystems to better understand the spares available for HLV and confirm the cost basis. A successful review was held with the MPS (Main Propulsion System) group,” noted Mr Shannon on the August 5 Standup report.

“A review is now underway with the Electrical Power Systems group, (to be followed by) the ground software status – which will be reviewed.”

Again noting positive work on evaluating the HLV via related shuttle departments, an overview was presented at a Joint Propulsion conference in Colorado – with one of the highlights focusing on the encouraging performance margins on the vehicle.

“Had a good review on Structures. Folks a JSC continue to do remarkable work on getting more fidelity in the overall design,” added notes from a couple of days ago. “Continue to refine performance on the vehicle we’re carrying as a baseline. Have margin to the left and right. It is looking very good.

“Started an effort on the aft boat tail design for manufacturing and producibility. Aero has been surprisingly very good. Have some pressure zones on the aft end of the boat tail and underneath the ET.

“Have more pressure around where LO2 and intertank meet, and are thinking of using superlight ablative plus normal SOFI (insulation) to take care of it. Looking good acoustically, too.

“A paper was presented that showcased using the HLV to launch a space-based solar powered demonstration in geosynchronous orbit. There was strong attendance at the (Joint Propulsion) conference. Thanks to the various projects for participating with the Business Office to help HLV refine its cost estimates. This provides credence to HLV’s numbers.” 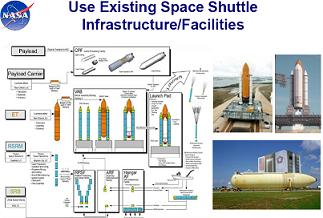 Though not directly mentioned in the notes, a switch to the HLV would provide a boost to the potential for the shuttle program to be extended.

The Augustine Commission has already made it known that the most viable option for reducing the gap between shuttle retirement and the operation of its successor would be via a “true” shuttle derived alternative – of which the HLV or Direct’s Jupiter are the only two concepts that fit into that category.

The commonality between the truly shuttle derived vehicles would – it is claimed – reduce costs and development cycles. It would also provide a lifeline to the thousands of skill set workers in the event of an extension, and a subsequent move to SD vehicle.

The findings of the Augustine Commission are expected later this month.