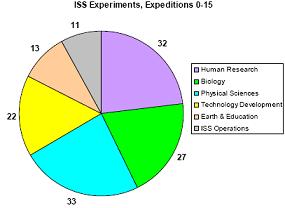 The International Space Station (ISS) is fighting back at claims made during the Augustine Commission review into Human Space Flight (HSF), where it was suggested scientists have seen only a small amount of science being produced on the orbital outpost. With a media relations push to counter such claims set to take place on Sunday – NASA produced a 262 page presentation to list the science that has already been conducted, despite the Station still undergoing assembly.

The International Space Station is nearing the end of that assembly phase – itself a major engineering accomplishment – ahead of a full operational period of around 10 years, providing the Station’s lifetime is extended to 2020.

That extension is expected to be one of the key recommendations of the Augustine review, despite an element of scorn being noted during the public meetings by some scientists via at least one member of the review panel – negativity centered around claims that only a small amount of science has been carried out on the US’ National Laboratory.

While that would be understandable, with the main science-producing modules having to wait their turn in the shuttle manifest for installation and outfitting, the reality is 138 major experiments have been completed on Station – prior to the recent increase of the orbital outpost’s crew to a compliment of six.

“The International Space Station (ISS) celebrated 10 years of operations in November 2008. Today, it is more than a human outpost in low Earth orbit (LEO). It is also an international science laboratory hosting state-of-the-art scientific facilities that support fundamental and applied research across the range of physical and biological sciences,” opened the large presentation, focusing on the scientific element of the Station.

The presentation, entitled “International Space Station Science Research Accomplishments During the Assembly Years: An Analysis of Results from 2000-2008,” is dated June 2009, but has yet to be released. It is expected to be made public during – or shortly after – the Sunday media drive. (However, see link at the end of the article to download the presentation that was acquired by this site).

Citing assembly delays caused by the loss of Columbia during STS-107, the presentation admitted very little real science had been carried out on Station during the first half of this decade.

“While the ISS did not support permanent human crews during the first two years of operations (November 1998 to November 2000), it hosted a few early science experiments months before the first international crew took up residence. Since that time – and simultaneous with the complicated task of ISS construction and overcoming impacts from the tragic Columbia accident – science returns from the ISS have been growing at a steady pace.”

While the presentation is heavily angled towards making inroads into the argument the ISS has failed to produce the scientific results close to a level that had previously been expected, it also makes strong points on how much damage was caused by the loss of the shuttle supply line during the post-Columbia standdown.

“The crew of the ISS was also reduced from three to two, and the research program was drastically adjusted to accommodate these changes. Since return to flight in 2005, the research space has grown.”

Although the European ATV has made its debut run to the ISS, with the Japanese HTV soon to follow next month, along with the Commercial partners of Orbital and SpaceX due to begin supply flights in 2012, the loss of the shuttle in 2011 is indirectly referenced via the aforementioned notes on the negative upmass capability to the Station during the standdown of the fleet ahead of Return To Flight.

Should the Augustine Commission recommend the extension of the ISS to 2020, without the extension of the shuttle fleet past 2011, such a major loss in both upmass and downmass will ironically damage the amount of scientific payload that can be launched to the ISS and returned to Earth. The presentation fails to note this problem, and the potential fallout on how much science can be conducted over the next decade as a result.

Specifically, it has been thanks to the return to regular launch operations for the shuttle that a “steady pace” of increased science has resulted in over 100 major scientific accomplishments being achieved on the Station, a number that is set to increase in growth as the six person crew take advantage of the numerous – and international – science racks that are now installed in the various modules, most of which have been launched via shuttle.

“From Expedition 0 through 15, 138 experiments have been operated on the ISS, supporting research for hundreds of ground-based investigators from the U.S. and International Partners. Many experiments are carried forward over several ISS increments, allowing for additional experimental runs and data collection,” added the presentation.

“This report focuses on the experimental results collected to date, including scientific publications from studies that are based on operational data. Today, NASA’s priorities for research aboard the ISS center on understanding human health during long-duration missions, researching effective countermeasures for long-duration crewmembers, and researching and testing new technologies that can be used for future Exploration crews and spacecraft.

“Most research also supports new understandings, methods, or applications that are relevant to life on Earth, such as understanding effective protocols to protect against loss of bone density or better methods for producing stronger metal alloys. Experiment results have already been used in applications as diverse as the manufacture of solar cell and insulation materials for new spacecraft and the verification of complex numerical models for behavior of fluids in fuel tanks.”

As mentioned in the introduction, the science experiments being conducted on the numerous racks on Station are just part of the actual science being conducted. The presentation outlined all elements of science, from the racks, to external payloads such as MISSE – and its relevance to Earth-based applications, and even studies into the mental health of crew members during long duration flights.

While MISSE was singled out for a section on the ISS’ “success stories” – due to its potential use on restoring and protecting valuable art work – the studies into the psychological health of crew members provided one of the more fascinating elements of the presentation.

“Isolated in the microgravity and vacuum of near-Earth orbit, the ISS is a potentially risky place in which to work and live. Mission success and crew safety rely on the ability of station crews to communicate and get along with their fellow crewmembers, regardless of their age, gender, nationality, or personal beliefs and preferences. It is also critical that the station crew has good interactions with members of ground operations.

“The Interactions study recorded crew and crew-ground activities in an effort to fully understand group dynamics, individual psychological health, and factors that both hinder and help daily life on station. The study consisted primarily of a computerized questionnaire that was filled out weekly by crewmembers in space and by ground personnel at NASA Johnson Space Center, NASA Marshall Space Flight Center, and the Russian Mission Control Center in Moscow. 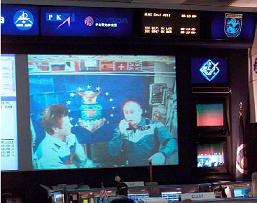 “The questionnaire software included a series of questions from three standard mood and interpersonal group climate questionnaires as well as a critical incident log.”

“The Interactions experiment observed the day-to-day relations between the ISS crew and the ground support teams in Houston, Huntsville, Alabama, and Moscow, Russia. Data were collected over a period of 4 years during ISS Expeditions 2 through 9.”

The findings – which will prove to be priceless for when humans eventually travel out of LEO on long duration missions to a base on the moon, and missions to Mars – noted the mental health of crewmembers actually improved as their missions progressed.

“Not surprisingly, the investigation is also identifying differences in mood and group perceptions between Americans and Russians, as well as between crewmembers and Mission Control personnel. In a separate but related study that was conducted by this research team, ISS crewmembers show evidence of an improvement in mental health as they adjust to the environment (adaptation).

“The study indicates that crewmembers improve in mood and social climate over the course of their missions.”

The bulk of the presentation outlined – individually – all of the scientific accomplishments over the early lifetime of the ISS, most of which are clearly aimed at improving life back on Earth.

With the quantity of science set to continue to ramp up over the next few years, a decision not to throw away the capability of the Station in 2016 will gain yet more science from the US’ National Laboratory in space.