Unacceptable weather over the Kennedy Space Center (KSC) has caused the scrub of STS-128 for 24 hours. NASA managers had worked through a few minor last-minute issues with Discovery and her systems in what has been an extremely interesting flow – one that has highlighted the pad teams’ ability to cope with unexpected work while still maintaining the level of excellence that has come to be expected in the Shuttle world.

In the hours before daybreak this morning, crews at Launch Pad 39A moved the Rotation Service Structure (RSS) away from Space Shuttle Discovery.

First motion of the RSS was noted just after 5A.M. EDT – right on the timeline – with the RSS reported to be in the “park” position for launch at 5:46A.M.

Also, according to a morning processing report, “OMS/RCS GHE/GN2 pressurization to flight mass and MPS/SSME helium tank fill to flight pressure were completed on Friday.”

Also, the R&R of two SSME (Space Shuttle Main Engine) harnesses was completed after the above mentioned pressurization events were complete.

“The two SSME harnesses were inspected after S0071 and retest was performed with nominal system function,” notes the processing report on L2.

The IPR was upgraded to Ground Support Equipment Problem Report.

The second IPR (IPR 128V-0068) was noted as a noisy Pump discharge pressure measurement at the LOX storage areas.

“In total, 3 of the 8 measurements on that INCS card are noisy,” added processing notes. “Troubleshooting and R&R of the card did not fix the problem.”

The forward plan is to use “as is” because there are redundant measurements that can be used for tanking.

UPDATE:  An ice formation on the LH2 T-0 umbilical was the only issue worked through the count that had required evaluation by the MMT. That was cleared as a constraint during the T-9 minute hold. However, unacceptable weather failed to clear in time for the allowance to come out of the hold. The vehicle is now in a 24 hour scrub turnaround.

A new article will be published on Tuesday.

Highlighted by the L-2 Day MMT (Mission Management Team) Briefing, NASA and Shuttle managers continued to discuss a wide range of issues that could potentially have affected Discovery’s mission.

“Had an hour discussion about FPCA3 failure seen on the pad,” notes Mike Moses, chairman of the KSC MMT. “Wanted to talk about this a little more as we’d seen two similar failures in SAIL units at JSC before STS-127.”

Moses explained that the flight rationale for Endeavour’s mission last month was built upon the fact that the SAIL boxes at JSC were cycled significantly more times than the boxes in the Shuttle Fleet.

Therefore, flight rationale was accepted based on the working idea that the SAIL failures were a result of age-life issues. However, since the failure at the pad on Discovery was very similar, the teams wanted to go look more closely at the failure to determine a forward plan for STS-128 and subsequent flights.

In fact, inspection of the SAIL units revealed what appeared to be a workmanship error and the box removed from Discovery looked to have a physically bent component.

These boxes are used in the AC inverters. If one box fails, the contactor will remain in a constant state that cannot be changed – that would be a failure in either the “on” or “off” condition.

Since these boxes provide power to – among other things – the Reaction Control System jets, the MMT and engineering community have determined that the FPCA boxes will be turned on prior to liftoff and left on until after docking is complete.

This will ensure power to all thrusters during the rendezvous and docking operations on FD-3 (Flight Day 3).

After docking, the boxes will be turned off. That way, if they fail in the “on” position it is no constraint to the mission and, should they fail off during docked ops, it is not a constraint as they are no longer needed after docking and there are redundancies that can be used.

This redundancy exists for the aft RCS jets which are required for entry control at the end of the mission. 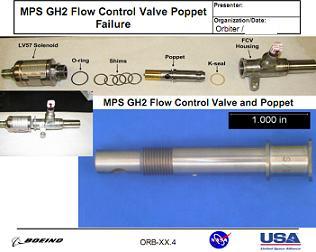 The second issue discussed during the L-2 MMT pertained to the Shuttle Fleet’s Flow Control Valves.

“We’ve been screening the Flow Control Valves (FCVs) before every flight to make sure they’re good,” noted Moses.

On STS-127, there was one FCV that had zero flights to its credit. Prior to installation and flight on Endeavour, that FCV’s eddy-current inspection was noted to be “off.”

The decision was made to fly the FCV as the eddy-current observation – which can detect any imperfection in the FCVs – was low and the thought was that a crack could not propagate enough to liberate during ascent.

In fact, there was no liberation event from that FCV, however, post-flight inspections revealed a significant increase in the eddy-current test – indicating a problem.

The FCV was opened and a crack was discovered. A review of pre-flight information based on the post-flight results lead the engineering community to the understanding that there was probably a “starter crack” in the FCV prior to launch that propagated during ascent.

Since the eddy-current screenings detect any imperfections in the FCVs, the teams have determined that their testing limits were too liberal and that they need to be more conservative in their assessments.

Moses noted that the screening process “needs to be don’t fly with eddy-current indications.”

These new screenings were applied to the FCVs in Discovery and LON vehicle Atlantis. All FCVs in these two vehicles passed the new screening requirements and are thus safe to fly.

The final major change debuting on Discovery/STS-128 is a redesign of the SSME Joint F3 Liquid Air Insulation Boot. 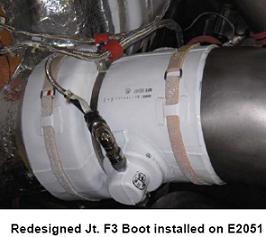 The redesigned boot eliminates any gaps that might exist and increases the cover bond areas and cover bond temperatures.

All flight testing and certification for the new boot has been completed and all STS-128 SSMEs are clear for flight.

All previous IFAs have been closed and there were no SSME IFAs from STS-127.

Meanwhile, for LON support, Atlantis’ three SSMEs have been installed and final engine securing is expected to wrap up tomorrow in OPF-1.