With the clearance of the PV12 Inboard LH2 Fill and Drain Valve issue  by the Mission Management Team (MMT) – which ironically performed as planned during tanking – Shuttle Discovery enjoyed a super smooth countdown and launch, as she takes aim on the International Space Station (ISS).

Technically an extension of attempt 3 for STS-128, Discovery’s countdown was held for less than 24 hours in the flow, to allow for additional data gathering on the valve issue – mainly relating to flight rationale being signed by the engineering teams.

Out at the pad, the Discovery behaved well, as she patiently remains sat at Pad 39A for her midnight trip to the International Space Station (ISS).

“Current weather forecast for launch is favorable, calling for only a 40 percent chance of weather prohibiting launch.”

Work on the one remaining IPR (Interim Problem Report) – relating to a middeck payload that was suffering from humidity issues – was also resolved.

“IPR 82 Glacier temperature display was toggling out of limits update: Glacier S/N 5 was removed and replaced with S/N 4,” added processing notes. “Additional analysis showed excessive moisture in the cooling system caused the unit to freeze up.

“Payloads installed new desiccants in trays in Glacier to eliminate any excess moisture.”

The countdown progressed with issue, bar one requirement to clear ice, which was observed on the T-0 umbilical. A high temp reading on Fuel Cell 2 was also cleared.

Managers were close to approving a go for launch on Thursday – which would have resulted in an early Friday morning T-0 – before time constraints led to MMT manager Mike Moses making the correct call to give the teams more time via a one day slip.

“The STS-128 Launch attempt has been cancelled (Friday morning attempt) to allow the team additional time to review valve cycle timing data and develop additional rationale for flight,” noted one MMT memo announcing the decision. “Will be a 7:00 pm CDT OPO (Orbiter Project Office) meeting to discuss the status of the data review and flight rationale.”

That OPO meeting concluded with positive results, which in turn made up the bulk of the discussions at the MMT meeting at KSC, which was conducted at noon local time. That resulted in the clearance for Discovery to proceed to launch. 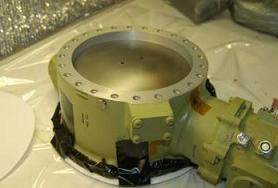 Additional technical overviews were created for the MMT, all of which backed up the claims that the valve appears to be operating nominally, even if the Valve Position Indicator (VPI) appears to be intermittent. This remained the most challenging element of the discussions, as the VPI failed to repeat the problem during the five test cycles earlier in the week.

“LCC MPS-04 required this indication illuminate for at least 1 sample to verify the valve successfully transitioned to the closed position. These valves have had a failure history of driver galling which can result in a failure of the valve. The potential for incipient failure in this mode is identified through the inability to verify the valve has completed a cycle.

“If this has occurred any further cycling of the valve can further degrade the ability to control the valve.”

However, despite the VPI indication, all other data pointed towards the valve performing as required – this was backed up by documentation that compared the surrounding parameters with that of STS-119’s PV12 valve, which engineers know had a nominal operation during tanking. This is an important element, as a damaged valve would be highly undesirable for Discovery during Space Shuttle Main Engine (SSME) ignition and ascent. 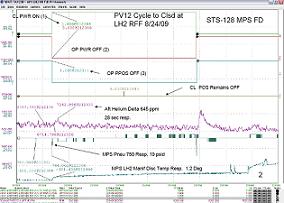 As a result, the discussions have been related to providing a waiver to the MPS-04 LCC, had the VPI once again prove to be troublesome – while checks are made on the other the parameters that indicate they do have nominal performance from the valve.  In the end, nominal performance of the valve and the VPI were observed during the countdown.

Other forms of “screening” during the tanking were also available to managers, with the aim to provide parameters that could have helped show if the valve was enjoying a nominal performance. 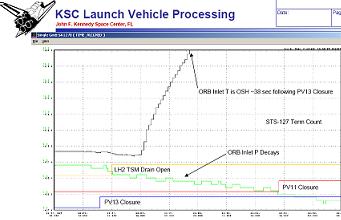 “1) The Orbiter Inlet Press/Temp Profile during Terminal Count provides an opportunity to gather data (a pressurized Leak Check) on PV12/PV13 as the Temp increases to OSH and the Pressure decays. The screening time is limited to the time between PV13’s closure and PV11’s closure (~1m14s).

“2) Additionally an LH2 Revert during the early part of Replenish would provide similar screening (minus the Flight Pressurization). Granted that a Revert is not without it’s risks but it would provide this data early in the count.

“The current LCC for PV22 MPS-12 uses a 1 of 2 for the Close Indicator OR OSH on the Bleed Temp which is consistent with the screening of #1 above…it is understood that this screening does not quantify any supposed leakage that may exist (in the absence of a PV12 Close indicator) but could be used for as additional confidence that the valve closure is in family.”

The MMT opted for a plan where the valve would have been cycled – twice – to attempt to confirm its status, had the VPI repeat its condition during tanking. However, with the nominal performance, none of the above was required.