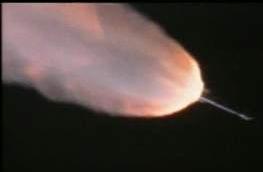 A United Launch Alliance (ULA) Delta II has become the last rocket to lift off from Cape Canaveral’s Space Launch Complex 17A this morning, as it launched the twenty-first and last GPS IIR satellite for the US Air Force. The 2059-kilogram GPS IIR-21(M) satellite, also known as GPS IIRM-8, was deployed following a sixty-eight minute flight. Liftoff was on schedule at 10:35 GMT (06:35 local time).

“Congratulations to the Air Force and our mission partners in deploying this revolutionary space system that has changed the world for the better in the past 20 years,” said Jim Sponnick, vice president, Delta Product Line. “One third of the 143 successful Delta II launches were GPS satellites.

“The ULA Delta team is extremely proud to have launched this incredible constellation. During the past two decades, the system has changed how people live their lives on a daily basis. GPS has greatly improved military operations as well as numerous maritime, aircraft, civilian and business operations worldwide.”

“We have the STSS Demo launch set for September, the WorldView-2 launch scheduled for October, and several more scheduled beyond those missions. The Delta II workhorse will remain the medium class launch vehicle industry standard for years to come.”

This launch will end the Delta II’s association with the GPS programme, which has spanned twenty years and forty nine launches including today’s. GPS launches will continue with the GPS IIF series, which will use EELVs.

The GPS II-1, or USA-35, satellite was the payload for the Delta II’s maiden flight, which used the 6925 configuration and lifted off from SLC-17A on 14 February 1989. The first GPS IIA satellite was the payload for the maiden flight of the 7000 series Delta II in November 1990. All Delta II launches of GPS satellites have been successful bar one; GPS IIR-1 was lost due to a booster failure seconds after launch in January 1997.

Today’s launch will be the last Delta II to use the 7925 configuration. The first stage is an Extra-Extended Long Tank Thor, augmented during ascent by nine GEM 40 solid rocket motors.

The second stage is a Delta-K, and the third stage is a Star 48B. A standard configuration, 2.9-metre (9.5-foot) diameter, payload faring will encapsulate the satellite and upper stages during their ascent.

The first stage RS-27A main engine will ignite about two seconds before launch, along with two vernier engines which will be used to control the rocket’s roll.

Six of the solid rocket motors will light at liftoff, and burn for a little over a minute. Fifty seconds into the flight, the rocket will pass through the area of maximum dynamic pressure, max-Q. 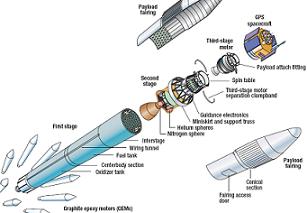 Once the ground-lit solid motors burn out sixty three seconds after liftoff, they will remain attached for three seconds before falling away from the rocket in two groups of three, one second apart.

Around two seconds after the ground-lit solid motors burn out, but before they separate, the three air-lit motors will ignite. These will also burn for one minute.

Two minutes and twenty seconds into the flight, the rocket will perform the first of two dog-leg manoeuvres to increase the inclination of its deployment orbit.

These manoeuvres will be performed in order to reach an inclination which cannot normally be reached from Cape Canaveral due to range safety requirements, and the first will last twenty seconds.

Four minutes and twenty three seconds into the flight, the first stage main engine cutoff will occur, with the verniers following suit a few seconds later. Eight seconds after MECO, the first stage will separate, and the second stage will coast for five and a half seconds before igniting its AJ-10-118K engine to begin its first burn.

Fifty seconds after the second stage has completed its second burn, the third stage will be spun up to provide stabilisation during its burn. Three seconds later, it will separate from the second stage, before igniting thirty seven seconds later for an eighty-seven second burn. Following burnout of the upper stage, the vehicle will coast for just under two minutes, and then spacecraft separation will occur.

The launch will last about sixty-eight minutes from lift-off to spacecraft separation. GPS IIR-21 will be deployed into a 193 by 20,370 kilometre orbit, inclined at 40 degrees. The spacecraft will use its onboard propulsion system, which includes a Star-37FM apogee motor, to raise itself into an operational medium Earth orbit. It will replace the USA-126, or GPS IIA-26, satellite, covering Slot 3, Plane E of the GPS constellation

Around one hour and forty seven minutes after launch, the second stage will restart for a third burn. This will be a propellent depletion burn, lasting approximately thirty two seconds, and will lower the stage’s orbit to speed up its orbital decay, so that it reenters the atmosphere sooner rather than later. 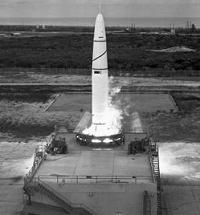 Launch Complex 17A, as it was then designated, was built during the 1950s as one of three pads for the Thor IRBM test programme, the others being LC-17B and LC-18B. The first launch from the complex was the unsuccessful third test flight of the Thor DM-18, which occurred on 30 August 1957. The launch of GPS IIR-21 is the 161st launch from SLC-17A, and the 145th orbital launch attempt to use the pad.

Another five launches will be made from SLC-2W at the Vandenberg Air Force Base. All remaining launches will use two-stage configurations, making this the final scheduled flight of a three-stage Delta rocket.

This will also mark the 30th and final launch of an AS-4000 satellite. The AS-4000 bus was developed by GE Astro Space, which was subsequently sold to Martin Marietta. Production was transferred to Lockheed Martin when it was formed. The AS-4000 bus was used for all twenty one GPS IIR satellites, as well as eight commercial communications satellites and NASA’s Advanced Communications Test Satellite.

As the Delta II programme winds down, United Launch Alliance have been announcing job cuts. 224 employees are expected to be laid off on 15 October. The reduction in Delta II launch rates was cited as one of the main reasons for the cutbacks.

Today’s launch is the 144th flight of the Delta II. The next is currently scheduled for 16 September with STSS-Demo, the last US military payload on the Delta II manifest, which is being launched under a contract with NASA.

It is unclear what the next launch to be conducted by United Launch Alliance will be, as two Atlas launches which were scheduled for late August with the PAN satellite, and early September with a DMSP spacecraft, have both slipped to unknown dates. STSS-Demo is the next ULA launch with a confirmed date.