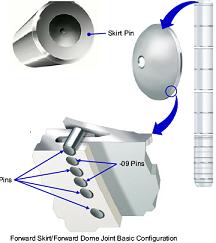 With STS-128 and Discovery officially cleared by the SOMD (Space Operations Mission Directorate) FRR for an opening launch attempt on Tuesday, August 25 at 1:36A.M. EDT, NASA’s ongoing effort to ensure that all aspects of the Space Shuttle system are safe to fly was not dedicated just to the External Tank, as managers thoroughly reviewed the performance of the STS-127 Solid Rocket Boosters (SRBs) and Reusable Solid Rocket Motors (RSRMs) – as they did with all of the shuttle systems.

Following the late acceptance of flight rationale relating to the foam liberation concerns from the External Tank, managers met again on Wednesday to work through the final elements involved with launching Discovery to the International Space Station.

Presentations on the SRBs and RSRMs that will fly with Discovery were moved for discussion from Tuesday – due to the amount of debate on the foam losses observed on STS-127’s launch – and debated on Wednesday morning. All received clearance for flight.

All pins that are installed on the RH RSRM meet engineering requirements. Furthermore, the RSRM presentation notes early on that this issue is not a concern for flight safety.

Also, flight approval for this issue via a Level II waiver was accepted on August 6 with a final waiver passing a Change Request review on August 11.

The issue is that all of the -09 pins currently installed on Discovery’s RH RSRM (18 total) bear the physical lot number marking “ECL0008” and their specific build records cannot be located.

As such, “Lot number traceability was lost, but part numbers are correct,” notes the RSRM FRR presentation.

Justification for flight was reached specifically because the -09 pins were created from the -03 pins (which are the standard/baselined flight pin) — thereby allowing engineers to verify the material properties of the -09 pins.

“Engineering requires -09 pins be made from -03 pins by grinding 0.01 inches off the diameters.” During this process, however, the physical part numbers on the pins were changed.

Furthermore, the diameters of the -09 pins were verified during their fabrication process from the -03 pins. Also, all remaining -09 pins bearing the physical lot number marking “ECL0008” have been re-inspected and “meet dimensional requirements.” 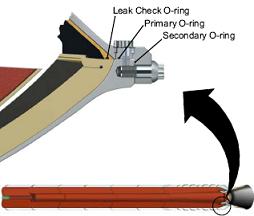 The next issue discussed with the RSRMs was the replacement of the V1247 fluorocarbon O-rings with V1288 O-rings in the nozzle-to-case joint.

“V1288 was developed to improve resiliency with no degradation to other performance characteristics and fly with higher margins,” notes the presentation.

Resiliency testing of the new O-ring showed similar performance under squeeze and temperature conditions as well as a “High temperature sealing capability equivalent to V1247.”

Furthermore, the erosion and ablation tests of the new O-ring revealed a significant improvement (by a factor of two) from the previous model, as did numerous static and in-flight (STS-122 and STS-125) tests in both the field joints and nozzle-to-case joints.

The third and final topic discussed in the RSRM presentation pertained to the removal of an inactive Stiffener Stub. 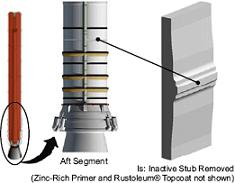 Non-Destructive Evaluations (NDE) and proof testing were performed prior to machining off the unnecessary component, after which extensive inspection was required to verify engineering characteristics in the high-stress area.

Analysis shows the machined area will see temperatures during launch and SRB entry/splashdown of 370 degrees F – which is well within the 500 degrees F limit.

Additionally, the SRB presentation to the SSP FRR documented two areas of concern identified after Endeavour’s STS-127 mission last month and after STS-128’s Shuttle Interface Test in the VAB earlier this month. 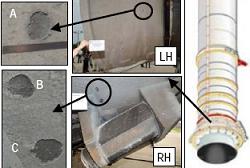 The first issue discussed was the missing Marshall Convergent Coating (MCC-1) on both of STS-127’s BI-138 aft skirts.

The main reason for concern with this missing coating is that it is classed as a potential debris hazard to the Shuttle Vehicle during launch – mainly because MCC-1 is not an accepted debris and a Risk Assessment Mass analysis has not been performed on this area of the vehicle.

However, a review of the MCC-1 spray operation has yielded a potential root cause of this issue.

Standard re-spray operations with “recovery error overlaps” were used to correct the interruptions to the original sprays.

In total, 10 SRB structures experienced interruptions in their MCC-1 sprays – the first of which flew on STS-117 in June 2007.

Eight of these 10 (including BI-138 on STS-127) have flown with no MCC-1 coating loss noted during post-flight inspections.

To date, analyses and inspection suggests the MCC-1 liberation event on STS-127 was limited to the overlap area of the sprays.

All areas on BI-139 (the flight set for STS-128) have passed the 50 psi minimum requirement for pull tests and even exceeded the upper limit of the gage (204 psi).

As such, the issue is not considered a hazard to Discovery and STS-128. 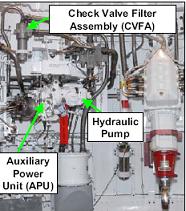 The final topic associated with the SRBs for STS-128 is the “Suspect reverse rotation of LH tilt hydraulic pump and APU due to check valve failure during Shuttle Interface Test (SIT) ground hydraulics testing” on the STS-128 stack.

Multiple attempts to correct the issue were unsuccessful and the leak check was eventually aborted.

Post-test inspection of the Trust Vector Control system revealed that the tilt pump was warm to the touch.

The entire assembly (CVFA) was replaced at Pad-A following the rollout of Discovery. This was followed by multiple system retests and a hot fire test at the pad to certify the newly installed system for flight.

Inspections of the removed CVFA revealed a failure of the check valve o-ring — which was classed as the only possible cause for the failure.

Despite this finding, the investigation is still ongoing to ensure that nothing has been overlooked.

With that, there are no RSRM or SRB constraints for Discovery and STS-128.