STS-128 entered into S0007 (launch countdown) operations at 11pm on Friday evening, as engineers at Launch Pad 39A are nearly complete with both standard and non-standard pre-launch processing operations. Meanwhile, NASA managers continue to review past-vehicle and hardware performance ahead of Tuesday morning’s scheduled liftoff – with the L-2 Mission Management Team (MMT) set to meet on Sunday.

“The team continues to work Launch Countdown preps supporting a S0007 Call to Stations for 2230L tonight,” noted Friday processing information on L2. “Launch is scheduled for 8/25, with a nominal T-0 at 0136L.”

Yesterday, Gaseous Nitrogen offload in support of a CHIT from JSC (Johnson Space Center) regarding Weight and Center of Gravity requirements was completed, as was replenishment of the LH2 (Liquid Hydrogen) storage tank at 39A via eight tankers.

“OMS/RCS GHE/GN2 pressurization to flight mass and MPS/SSME helium tank fill to flight pressure began at 0022 EDT. It continues and should be complete on 2nd shift.”

During this OMS/RCS pressurization process, the final portion of the FPCA3 (Forward Power Control Assembly) retest was conducted – with all information pointing to a successful retest of the Main Bus Controller.

Once these pressurization efforts are complete, Pad 39A will be reopened to necessary processing personnel and Orbiter aft closeouts for flight will resume. On tap for early Saturday morning is the installation of the 50-1 and 50-2 flight doors.

Both harnesses have been replaced at this time. A retest of the system is expected later today/early tomorrow morning after Hyper/MPS pressurization is complete. The issue with the Auto-Transfer Switch at the SLF (Shuttle Landing Facility) has similarly already been corrected.

“Launch preparations at the SLF revealed Auto-Transfer Switch 94 would not function properly impacting the South Ball Bar Lighting,” added processing information. The problem was traced to a bad transfer motor. The motor was repaired and retested yesterday with no issues identified.

As part of the standard post-launch inspections, workers at the Kennedy Space Center have compiled a list of IFAs (In-Flight Anomalies) and Special Topics that were reviewed by program and agency managers during Discovery’s/STS-128’s Flight Readiness Review process.

Following STS-127 last month, “All 127 KIFAs (KSC IFAs) have been baselined at the KSC Engineering Review Board (ERB) and Integrated IFAs have been partnered with Safety Engineering & Integration (SE&I).”

In all there were eight pad debris items noted by KSC engineers, five FOD (Foreign Object Debris) items, and one Ground Support Equipment (GSE) item for a total of 14 items.

“KSC Opened 14 STS-127 IFAs,” notes the SSP (Space Shuttle Program) FRR Special Topics presentation – available for download on L2. “Thirteen debris IFAs have been addressed at the ERB and the integrated IFA review was presented to the SE&I community on July 31st with 14 debris items.”

The presentation notes that the debris liftoff risk matrix remains unchanged after STS-127 (classed as infrequent, catastrophic) and no STS-127 KIFAs are a constraint to Discovery.

The presentation also notes that STS-127 had the lowest overall number of KIFAs since records began with STS-117 – demonstrating the intense care that is taken by the engineers. 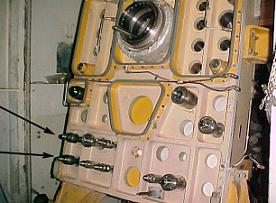 The second of three special topic items pertained to NASA managers was the T-0 Umbilical Ice formation observed on STS-119, STS-125, and STS-127.

“Observation: During the last three launch attempts, ice formation was detected on the bottom of the LH2 T-0 umbilical,” notes the FRR presentation.

An engineering analysis performed prior to the start of Countdown operations for Endeavour’s (STS-127’s) July 11th launch attempt detected a leak in the Ground Cooling Unit.

A waiver was accepted for the launch attempts on the 11th, 12th, and 13th of July. However, during the 48-hour scrub turnaround between the 13th and the 15th a “sniff check” was performed at the T-0 umbilical. This “sniff check” detected Freon – which was noted on past launches as having generated ice formations.

After Endeavour successfully launched, an audible leak was detected from the MLP-3 Freon Return Quick Disconnect.

A similar test was performed on Endeavour after her landing at KSC on July 31st. That leak check did not reveal any Freon in the area, confirming that the leak was from the ground and not from the vehicle.

The presentation further notes that all of Discovery’s flight Quick Disconnects have new internal seals and T-0 mate leak checks “were nominal.” 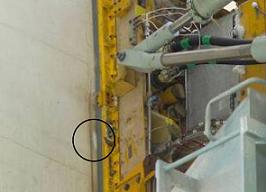 “Observation: During previous missions, ice formation has been detected in areas internal and external to the LH2 T-0 umbilical,” notes the Special Topics presentation.

T-0 exterior ice was also noted. “T-0 Exterior Ice forms on the vehicle when cold gas escaping from the peripheral seal interacts with expected ambient humidity or condensate on the vehicle.”

This ice formation does represent a debris concern even though ice formation/accumulation on the T-0 GSE is considered normal.

As such, multiple mitigation techniques have already been implemented while the root cause investigation continues.

“Installed Room-Temperature Vulcanized (RTV) ‘Water Diverters,'” notes the presentation. “Peripheral Seal corners have RTV applied to the per designed holes in place of fabricated water diverters that were used for STS-125 and STS-127.”

Additionally, verification of proper seal configuration post-rollout to the Pad-A was performed to ensure that the vibrations associated with rollout did not dislodge the water diverters.

Other inspections included verifying that the Felt Reusable Surface Insulation is free of contaminants and that that RTV sealant is installed at the peripheral seal top splice plate – which is the location where a water leak path was discovered on STS-127. 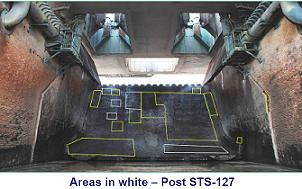 For the SRB Flame Deflector, “Several sections on the SRB side of the Flame Deflector had missing Fondu Fyre or had indications of subsurface damage following the STS-127 launch,” notes the KSC presentation.

The entire flame trench was inspected after STS-127’s launch with all suspect areas of Fondu Fyre identified and reported to the KSC ERB. Inspections for hollow areas were also performed.

The final piece of information presented to the FRR by KSC pertained to the Launch Countdown Turnaround options/constraints for STS-128.

Additionally, 450 lbs of Liquid Oxygen will be offloaded to assist with Ascent Performance Margins. This operation will add five hours to the PRSD load schedule during the countdown.

However, all top-off scenarios are moot points since the LO2 Pad Hold Time exceeds the duration of Discovery’s launch window.