The Damage Assessment Team (DAT) are working hundreds of images taken during the orbiter’s RPM (Rbar Pitch Maneuver) on Flight Day 3 – with full clearance from a Focused Inspection (FI) now gained. Clearance for re-entry will take around another day. Also, images of the External Tank (ET-132) via the ET Umbilical Well camera show the tank lost hardly any foam during its ride with Discovery on Friday night.

Discovery and her crew are now into the first full day of docked operations, following Sunday’s docking with the International Space Station (ISS), with Monday highlighted by the berthing of the Leonardo Multi-purpose Logistics Module (MPLM) on to the ISS’ Harmony Node.

As has been the norm for recent missions, the orbiter is performing well, with only a handful of issues – all holding no mission impact – being worked by the Mission Evaluation Room (MER).

“This was done to avoid possible nuisance alarms on-orbit given the slightly erratic performance seen during ascent. 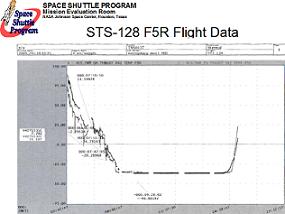 “Following the manifold closure, the F5R injector temperature measurements, after approximately 7 hours at off-scale low (OSL) values, were observed to rise to over 200 degrees. The difference between the fuel and oxidizer injector temperatures continues to indicate that the thruster heater is operating.

“Analysis continues on the injector temperature values which on ground displays were observed to be less than zero, negative injection temperatures were unexpected.”

Specific presentations (all available on L2) have been created on all the MER “funnies” – a word used to describe an off-nominal element of the mission – and will be outlined in full via an upcoming article, including several evaluation presentations on DAP ALT (Digital Autopilot Atitude Control), based on Discovery’s unavailable vernier thrusters.

Also noted was the condition of Pad 39A following Discovery’s launch. Damage to the flame trenches – which is usual – appears to only be minor, which aids the pad’s turnaround for November’s STS-129 mission.

“Pad Report: No major damage or debris was found at pad A. The ICE team inspections noted mostly light damage in the flame trench to the east and west flame deflectors and to the north flame trench wall. The ICE team will release their full report soon.”

The DAT engineers found no items of concern with Discovery’s TPS – which is likely to remain the case as they carry out a peer review to doublecheck the state of the orbiter’s heatshield via the RPM photography. 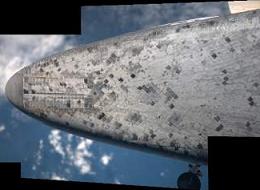 The RPM – Rbar denoting along the radius vector of the ISS, downward – allowed the ISS crew to perform a high resolution photo survey of the lower surface TPS tiles to screen for ascent debris damage.

The FD3 RPM images are an addition to the opening FD2 Inspections carried out mainly on the orbiter via the Orbiter Boom Sensor System (OBSS). Data from the opening inspections cleared Discovery for re-entry from a “level II” standpoint, with all Reinforced Carbon Carbon (RCC) panels cleared by the start of Flight Day 4.

According to the latest DAT presentation, only 354 areas – or regions – of interest were found, which is one of the lowest on record.

“All ascent threats to the LESS have been cleared through FD2 imagery. LESS/RCC team cleared all early inspection regions of interest Level 1 completed at 09:40 Sunday, Level 2 completed at 19:00 Sunday, and final PRT disposition was completed at 21:40 Sunday,” noted the DAT presentation on L2.

“No ROI (Region Of Interest) exhibited any damage characteristics and the ROI totals were within expectations. From the early inspections (program) is GO for entry and has accepted these results to use as the late mission imagery baseline.” 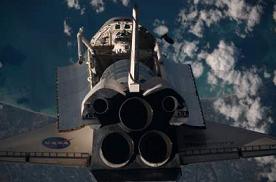 Moving on to the RPM imagery evaluations, the DAT had already cleared Discovery from the need for a Focused Inspection on an area known as the “keep out zone” – on the Starboard area of the orbiter.

“The Damage Assessment Team (DAT) has reviewed all imagery associated with the Starboard MPLM ‘keep out zone’,” added DAT. “No damage was noted and so there is no requirement for focused inspection in this area. The DAT will continue to review all other RPM imagery and populate the TIIMS database throughout the night.”

Such has been the clean appearance of the majority of Discovery’s TPS, managers were also able to entirely clear Discovery from a Focused Inspection by late on Monday night.

Small areas of cosmetic damage can be seen on the RPM photography (dump of raw images in L2), such as around the port ET door – which again is not unusual from a historical standpoint.

A couple of streaks can also be observed either side of the Boundary Layer Transition (BLT) Detailed Test Objective (DTO) – which Discovery is carrying out for a second time.

Fortunately, the ‘damage’ avoids the downstream path of the tile with the protrusion, and thus should hold no detrimental effect on the data gathering from the DTO.

As to what caused the damage is still being worked on, with TPS liberations from the External Tank – the usual source of TPS damage on the orbiters – appearing to show hardly any signs of foam loss, per ET Umbilical Well photography (L2).

The only confirmed area of foam loss is a small divot under the ET’s bipod. 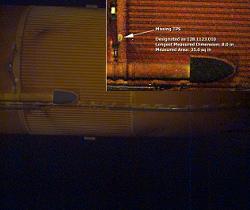 All the LH2 and LO2 Ice Frost Ramps (IFRs) appear to be in good condition, with no signs of missing foam, as observed during STS-127, leading to a large scale investigation into the health of both ET-132 and ET-133’s ramps.

No obvious signs of foam loss can be seen from the intertank, which was also investigated post-127 – leading to “pull tests” being conducted on the tank. The positive results that came back from the tests in the VAB (Vehicle Assembly Building) and out at the Pad have proven to be accurate reflection of ET-132’s TPS health.

This also boosts the current theory that the intertank losses from ET-131 was a one-off contamination event, when dust managed to find its way on to the structure of ET-131 during its assembly process at the Michoud Assembly Facility (MAF), which resulted in a reduction of the adhesive properties between the foam and the tank’s structure.