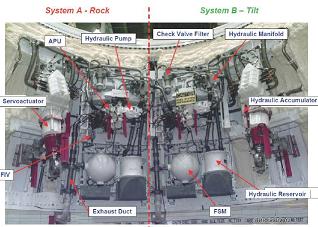 As managers prepare their External Tank findings for the Agency Flight Readiness Review (FRR), engineers out at Pad 39A have through what is being described as a significant issue related to the Forward Power Control Assembly (FPCA) on Discovery. The troubleshooting took place through the weekend, with a 24 hour hit to the processing flow.

Managers are focusing on the clearance of the LO2 Ice Frost Ramp (IFR) via risk acceptance, with the ultimate decision on either to proceed to launch later this month – or rollback to the Vehicle Assembly Building (VAB) for modifications – due on Tuesday.

The intertank is also undergoing final checks on its adhesive properties between the foam and the tank structure, with access being built at the pad for additional pull tests. Numerous pull tests were conducted when ET-132 was still inside the VAB – all came back showing good results.

“Had a good Program FRR; lots of good discussion. Folks pretty much understand what the major discussion points are for us, and what considerations there are,” noted the latest Shuttle Standup/Integration report on L2.

“(Shuttle managers) John Shannon and LeRoy Cain got a lot of good advice and counsel at the end of the discussion.

“In the meantime, we are pressing forward in terms of readiness and preparation for launch as early as August 24. In the next couple of days we will make some decisions on whether or not we will continue on this path, or do something different in the way of gathering some more data or doing more test, etc.”

Engineers are pressing ahead with their pad flow, under the assumption the Agency FRR at the Kennedy Space Center (KSC) will give final approval for launch.

“The agency-level FRR is currently scheduled for August 18th. The team is continuing to work safely towards an August 24th launch,” added Friday morning processing information.

Work on Discovery’s left hand Solid Rocket Booster (SRB) – associated with replacement work of hardware including and related to a Check Valve Filter Assembly (CVFA) – has highlighted the pad flow of late, which is nearing completion.

Due to the changeout of the associated hydraulic pump, a hotfire was required on the booster’s Hydraulic Power Unit (HPU) – which was completed at 22:00 local time on Friday.

“LH SRB HPU (PR SB-BI139L-0002/-0003) update: Hotfire is now scheduled for 2nd shift (Friday), with retest and post ops continuing through the weekend,” added processing information on Friday. “After the hotfire, will be picking with ordnance connects.”

However, S5009 operations (Ordinance Installation) have been delayed by 24 hours, as engineers troubleshoot an issue with the FPCA, which was spotted during pre-ordnance testing.

“Picked up IPR (Interim Problem Report) 56 as part of the pre-ordnance testing; a bus has an issue,” added the Standup. “Will do some troubleshooting on Saturday.”

“IPR 0056 update: Main Bus to A/C Inverter AC3 Ph C failed,” processing information added. “Should be off, is on. Engineering has narrowed the problem to a FPCA or a FLCA. (UPDATE: Engineers confirm the issue is with the FPCA-3.)

“This will require a power down period to install breakout boxes and continue troubleshooting. This will be performed after S0024 and prior to S5009.”

The hardware in question is related to the orbiter’s main bus distribution system, with the Forward Power Controllers (FPCs) distributing power from their dedicated Fuel Cell to orbiter systems. This specific hardware is located in the Crew Cabin Avionics Bays according to Electrical Power System manuals.

Once the Controller at fault has been identified and replaced, everything it supplies power to downstream will require retest. Besides the landing gear logic circuitry, it affects almost every system onboard. Thus, the retest will be significant and it will have to be determined if all the retesting can be performed as necessary at the pad.

The retest concern mainly relates to the association with the landing gear, because testing will have to avoid accidentally causing the gear whilst at the pad – which would result in Discovery being out of configuration. A failed retest in itself would also hold the potential of sending the stack back to the VAB.

At one point late on Friday, engineering notes actually referenced a placeholder for Discovery to be rolled back if the testing failed.

Engineers were informed that S5009 was in progress, but was now on hold, pending completion of a repair attempt – thus processing milestones in S5009 are to slide to the right by 24 hours. No reference to the an impact on the launch date target was noted.

The notes also added that should the controller repair attempt fail, Discovery will rollback to the VAB on Sunday.

However, this has apparently been played down by managers, with counter notes claiming only the ET foam related discussions hold the potential for rollback. It is likely the reference to a rollback would be in the event of a serious issue being found during the retests.

UPDATE 1: With the confirmation the issue is specific to FPCA-3, Discovery was powered down Saturday morning, for the installation of a replacement box, ahead of retests.

UPDATE 2: Retests were conducted all through Sunday, with good news noted as no cold plate discrepancies were found. More testing is required, which will start after Sunday night’s S5009 operations. A full review will be noted via Monday morning processing information, including any hit on the launch date.

The remaining IPRs with STS-128’s pad flow are deemed minor in comparison, and are likely to be cleared in the coming days.

“Discrepant flow meter found in loading the FRCS (Forward Reaction Control System) Propellant tank. The flow meter will be deselected and a second flow meter will be used. Constraint is S0007.200 15-3. IPR will be upgraded to GSE (Ground Support Equipment) and deferred to the next PAD load.

“The team reported an audible leak on an H2 tube at the OMBUU (Orbiter Mid Body Umbilical Unit). Disposition and repair will occur following S0024 and will require welding.”

Numerous IPRs are commonplace in a vehicle’s pad flow, as the complex processing milestones are completed ahead of S0007 Launch Countdown operations.