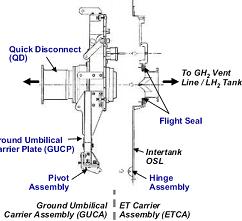 The Agency Flight Readiness Review (FRR) is still expected to slip STS-128’s launch date by one day – to August 25 – due to additional pad flow work related to repairs on an ETVAS (External Tank Vent Arm System) ordnance cable. However, managers will meet again on Wednesday to set the launch date, as they all-but accept the risk assessment findings on the External Tank foam liberation concerns.

As reported by this site over the past few days, two engineering challenges placed pressure on the pad flow towards a August 24 launch date, thus resulting in a one day impact to the schedule – still a major achievement due to the interruption to the processing milestones.

Firstly, an issue with a Main Bus controller – specifically the Forward Power Control Assembly (FPCA-3) – caused a delay during weekend processing, ahead of a second problem relating to a cable on the ETVAS – which has resulted in engineers having to back out of S5009 operations for its repair.

“Troubleshooting led to the replacement of the power cable on the GUCP. Ordnance disconnects were completed this morning (Tuesday) in support of retest. Once retest is complete, ordnance will be re-connected and S5009 operations (Run 3) will be finished.”

As of late on Tuesday, the cable had been repaired, allowing engineers to proceed with “S5009 ordnance install” to pick up at 21:00 local time.

While FPCA3 retests continue – though main retests are complete with no issues found – engineers are looking into the specifics of the failed hardware, in order to determine what caused the issue. This is also involved in the FRR’s flight rationale discussions.

“Picked up an IPR (Interim Problem Report) of the FWD PCA #3 last week,” added the latest Shuttle Standup/Integration report on L2. “Did some troubleshooting on the PCA (Power Control Assembly). Over the weekend, got the R&R and most of the retest done. Still have a little of the retest to complete.

“The contactor has been removed from the FPCA. It is in the lab. Boeing-Engineering is performing failure analysis on it. The guys did a great job of getting it apart and starting the FA (Failure Analysis) on it this weekend.

“The part of the contactor that was failed turned out to be the Y2 lead, which is similar to the one talked about before, except this was in the OFF position. Some of the differences were that this one failed at the root where it was staked in, and that there was no solder bump present.

“There is more metallurgical analysis ongoing. How this will work into flight rationale, and what might have to change, and how to respond to this failure are all TBD (To Be Determined) right now.”

Once back into the regular pattern of processing on Tuesday evening, engineers will finish the closeouts of the orbiter for flight, as the mission closes in on S0007 Launch Countdown operations.

Three main areas of foam loss were observed during the ride to orbit, with the focus on two – an LO2 Ice Frost Ramp (IFR) and the liberations from the intertank. 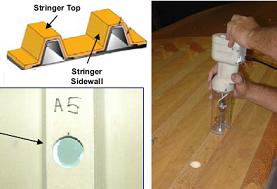 As reported on Monday, the final set of pull tests on Discovery’s External Tank (ET-132) have shown no issues, as the adhesive properties between the foam and the tank’s structure appearing to be well within limits.

Samples of the adhesive – taken during the pull tests – have been sent to the Michoud Assembly Facility (MAF) for testing, as the root cause of contamination – likely dust – finding its way on to the surface of the tank during their production in New Orleans continues to be the leading theory as root cause.

This also holds the potential of clearing all downstream tanks, should the contamination be confirmed as a one-off incident.

The reason managers are taking longer than usual to conclude the Agency FRR relates to the amount of data that has been collated on the foam loss issues since the incident with ET-131. As of the start of this week, additional data was still lacking – as noted by the Chief Engineer (department) at the Johnson Space Center (JSC).

“Had some follow-on meetings to talk about foam. The main topic, from a SSP (Space Shuttle Program) standpoint, was the ET foam. Talked through the three different aspects of it: bipod, intertank, and IFR,” the standup continued.

“There is still some concern there (IFRs), and folks want to recommend doing the NDE (Non Destructive Evaluations) as a technical recommendation. From a void standpoint, have a lot more confidence that we understand the void size and distribution. We still have some uncertainties in the release timing.”

Tomorrow’s additional day of meetings for the Agency FRR is not expected to take all day, with approval all-but secured on the risk assessments to favor approval for launch, as opposed to a rollback to the Vehicle Assembly Building (VAB) for modifications to the IFRs.

However, the amount of time spent debating the tank left a few outstanding items for the FRR to discuss, which will be completed on Wednesday morning.