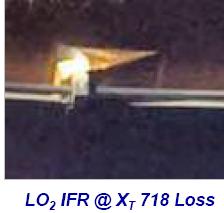 The Space Shuttle Program (SSP) Flight Readiness Review (FRR) heads into a two day meeting on Tuesday, with the focus on the status of ET-132’s Ice Frost Ramps (IFRs). STS-128 may have to rollback for modifications to the ramps – if managers fail to agree on risk acceptance. Interestingly, documentation on the ramp that has shed foam on the last two missions (Xt 718) has noted a potential geometric void via X-Rays.

Discovery is tracking a NET (No Earlier Than) launch date of August 24, based on the current processing milestones.

The S0017 Terminal Count Demonstration Test (TCDT) was completed as scheduled last Friday, with the next milestone of S0024 Prelaunch Propellant Load preparations in work, ahead of a call to stations 22:00 local time on Tuesday night.

The August 24 NET is based on the progress that has been made on resolving an issue with the left hand Solid Rocket Booster (SRB) – specifically a failed Check Valve Filter Assembly (CVFA), which required the changeout of associated hardware.

Discovery’s Payload Bay Doors were closed for flight on Sunday, following a quick review of an issue that was observed by engineers during their walkdown of the cargo bay.

“On the payload bay door right hand aft bulkhead bulb seal, four creases with cracks were observed,” added processing notes. “Engineering will process an MR (Material Review) on the condition, so the constraint to door closure was lifted.”

Another issue, related to a trunnion latch bolt on the orbiter side – was also cleared to fly as-is.

“PR (Problem Report) was taken for a possible galled bolt; the actual problem was trouble with the torque multiplier. Team decided to torque the bolt to near flight torque, safety wire the bolt, and provide rationale to fly as is.”

Following ET-131’s numerous foam liberation events during Endeavour’s ride uphill on STS-127, a large amount of attention has been paid on the next tank to fly – ET-132.

While the intertank foam’s adhesive properties appear to show no signs of a repeat liberation event on ET-132, the evaluations have continued – without full resolution – on the LO2 IFRs that run along the top third of the tank, following a foam shedding event during Endeavour’s launch – the second in a row, after a similar liberation occurred on STS-125 with Atlantis’ tank.

It is commonplace for the previous mission’s IFAs (In Flight Anomalies) to become a major part of the next mission’s Flight Readiness Review. However, more often than not, such IFAs are cleared in time to allow for a smooth transition to approving the mission to proceed as planned.

This time, however, there’s a chance the IFR issue may not gain the required “risk acceptance” via the FRR, which would result in the stack rolling back to the Vehicle Assembly Building (VAB) for modifications to two of the LO2 IFRs.

Thanks to a multitude of data, mainly via photography gained by the crew after ET sep, and the Umbilical Well camera embedded into the orbiters, engineers have a full overview of both the foam liberation area and its mass from the deceased ET-131.

However, despite a Technical Interchange Meeting (TIM), engineers are still evaluating the exact nature of both the release mechanism (foam shedding) and the potential threat such a liberation may have on the orbiter – in the event of an impact. Many variables are in work, such as the potential mass of such a liberation, and time of release.

Interestingly, the notes from the TIM point to a change in the way the LO2 IFRs are applied to the tank during processing at the Michoud Assembly Facility (MAF) in New Orleans. Those notes appear to point towards a potential correlation of increased foam shedding from the area, since the process was changed.

Whether or not the ramps will require modification is yet to be decided, with initial data showing the IFRs are in acceptable shape, per Non Destructive Evaluations (NDEs) – which included Terahertz scans.

“NDE performed at Xt 718 on ET-132 at KSC (THz) and on ET-133 (when it was still) at MAF,” added the presentation, before noting – for the first time in related documentation – that a void has been identified on ET-132’s Xt 718 ramp (previously no voids were documented), in the same area that liberated during STS-127. However, the documentation notes the void is within requirements. 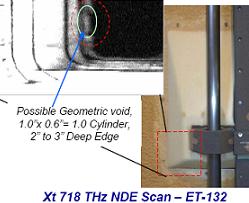 “One possible void identified on ET-132 and within process limits (divoting not expected). THz NDE performed at MAF on aft three ramps as planned work since RTF (Return To Flight). Results have shown conservative correlation with analysis. No debris observed from indications with divoting potential. As-built process paper reviewed with no issues identified LO2 IFR.”

With the focus on the observed void on the Xt 718 ramp, the PRCB documentation notes a rational for acceptance.

The break-up of the liberated foam from the IFR, thus vastly reducing the potential for damage on the orbiter in the event of an impact, is believed to have happened during STS-127’s foam loss.

However, it would appear that some of the shuttle-related departments have disagreed with such rational at this time, based on the findings of a potential void in the ramp in question, and the threat of a single piece breaking away as a result.

Such dissent of opinion is welcomed by the Space Shuttle Program (SSP), as it provides an additional drive to add confidence to the flight’s safety. The question will be if any difference of opinions are noted via the latest data that will be presented to the FRR, or if all parties are happy to sign off on the risk acceptance.

As of Monday, no firm indications were noted on which way the debate will go, be it rollback for modifications – which will likely include the spraying of an adhesive formula over the ramps to deter the foam from liberating, and/or the trimming of the areas of foam – thus removing the threat.

“There will be an SICB (Systems Integration Control Board) meeting to evaluate foam data (ahead of going into the SSP FRR). The earliest launch for STS-128 could be August 24th depending on results from the foam discussions. The end of the launch window would be August 29th.”

UPDATE: However, earlier indications from the opening hours of the SSP FRR on Tuesday point towards a drive to accept the risk as within safety requirements. This is being debated.

Even if ET-132 is cleared to fly by the FRR, a forward plan has been drawn up by Lockheed Martin for the potential modification of the downstream tanks. 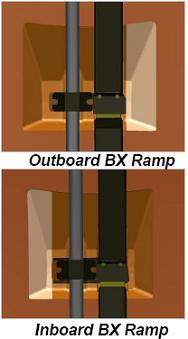 The modifications would replace some of the foam prone to liberating with a spray-over of a different material. Such a move would also eliminate the potential for voids to form in the ramps.

Such a plan would be initiated from ET-133 onwards, with work being carried out inside the VAB in the case of the STS-129 tank.

Interestingly, this plan is likely to make up most of the modification work to ET-132, should the FRR decide that rollback to the VAB is the best option.

Another article will follow, based on the SSP FRR materials, (28 presentations uploaded into L2).