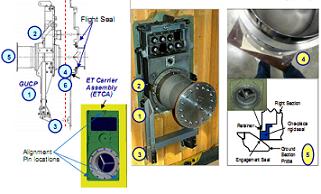 Although no ill effects were suffered by Endeavour, the problems with her External Tank (ET-131) – both prior and during last month’s launch – called for investigations into the downstream tanks, the latest of which is due to fly with Discovery later this month. Thanks to those evaluations, additional confidence has been gained ahead of STS-128’s launch with ET-132.

If External Tanks could survive their return to Earth, ET-131 would have found itself being placed on the naughty step inside the Vehicle Assembly Facility.

After realigning to acceptable weather conditions a month later, ET-131 shed an unusually large amount of foam during Endeavour’s ride uphill – mainly from the intertank region.

Notably, none of the liberated foam managed to cause anything more than cosmetic damage to Endeavour. However, Lockheed Martin – involved in ET-131’s manufacture at the Michoud Assembly Facility (MAF) – classed the tank’s performance as “on the outer edge of our family of experience.”

That classification came during the STS-127 IFA (In Flight Anomaly) review, which was dominated by ET-131’s events, partly due to the lack of any other issues with the highly successful flight to the International Space Station (ISS).

This issue is likely to be a thing of the past, after an investigation into ET-131’s leaks identified a misalignment of the “feet” – by a very small fraction – on the carrier plate, enough for the tiny hydrogen molecules to leak through the flight seal.

Following a realignment during re-installation, the addition of a more forgiving two-part flight seal, and a confidence check via a tanking test, no further leaks were detected on the subsequent loadings.

ET-132 will still find itself under the spotlight for STS-128’s late August attempt, with the manufacturing changes not sure to kick in until STS-129’s ET-133 tank. However, lessons learned from ET-131’s leaks will be incorporated into ET-132’s GUCP installation and tanking.

Three main areas of foam loss were observed during the ride to orbit, not unusual for a shuttle launch, but out of character for tanks that have flown since Return To Flight – due to the massive improvements in mitigating foam liberation by the ET engineering workforce. 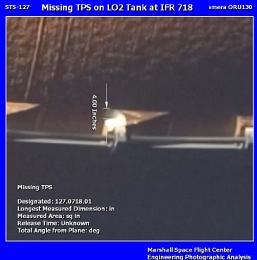 A large amount of work has taken place on the IFRs on the tanks, but mainly with the LH2 ramps. As with most of the ET mitigation efforts to reduce liberations, foam has been reduced on the main threat areas, thus lowering the potential mass of the foam losses that could impact the orbiter. Such has been the success, many future modifications are no longer required.

It is not known if any additional modifications can be made to the ramps, although it is still rare for the IFRs to shed foam that has a direct threat to the orbiter during ascent.

However, to add confidence the foam loss was a rare event, checks – including X-rays – have been carried out on Discovery’s ET-132, in order to ensure the foam has no underlying problem.

“All observations were within performance expectations. LO2 IFR TIM (Technical Interchange Meeting) at MAF on July 29-30 to review design, process, and inspections (complete).

“Planning to increase BSx/ THz NDE inspections to include (location/station) Xt718 (minimum) for tanks at MAF.”

The second area of foam loss that made the IFA review related to a section of ET-131’s Bipod closeout foam, a liberation that has not been observed on most of the recent tanks to fly uphill with the shuttle. 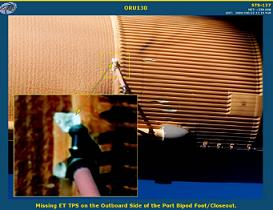 This area of foam has been greatly reduced, with the elimination of bipod ramp TPS (Thermal Protection System – Foam) – a large area of foam which liberated during STS-107’s ascent, resulting in the fatal damage to Columbia’s Reinforced Carbon Carbon (RCC).

No association – other than the location – can be made to the loss of a suitcase sized ramp that damaged Columbia, and the much smaller areas of closeout foam that remains near the bipod struts on post Return To Flight tanks.

Also, the loss is only being investigated due to the “potential” for an impact with the orbiter – as no impact was observed via the array of cameras that carefully track the shuttle during ascent.

Once again, engineers double-checked the health of the TPS application in the specific area of ET-132, and found no issues – again pointing to a one-off incident with Endeavour’s ET-131 tank.

However, it was the intertank losses that provided the most “dramatic” images of foam loss from ET-131, due to the visible streaks of missing foam seen on the ET photography by the crew after ET sep, and the ET Umbilical Well photography that were later downloaded to engineers on the ground. 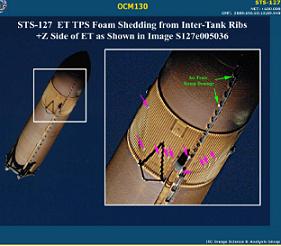 Again, impacts with the orbiter failed to cause any concern to engineers on the ground, from an orbiter damage standpoint. Only minor cosmetic damage noted on Endeavour’s starboard Chine area.

However, no chances are being taken, with an investigation into the incident relating not only to the root cause with ET-131, but checks into the health of ET-132’s intertank foam.

Although no “unique” root cause has been found, leading candidates have already been noted, such as dust/contamination finding its way on to the intertank structure, prior – or during – the automated foam applications at the Michoud Assembly Facility. 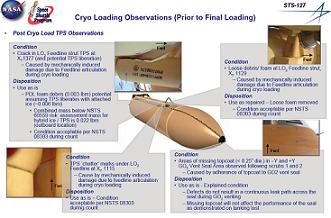 The tank was also put through its paces ahead of launch, via the GUCP and weather related scrubs, resulting in six cryo cycles. While the tanks are certified for 13 cryo cycles, this was the most a tank has endured for many years.

Opening results, gained from the ET-132 Intertank Bond Adhesion Tests and LO2 Ice Frost Ramp / –Y Bipod NDE Analysis effort that have taken place on Discovery’s tank inside the VAB. found no candidates that would suggest ET-132 is suffering from the similar issues observed with its predecessor.

Those checks, mainly surrounding pull tests to check the adhesive properties between the foam and the tank structure – which may have been downgraded via the dust/contamination theory – have been taking place in stages, all of which have found no issues with Discovery’s tank.

The inspections also took a closer look at the other areas on ET-132, which shed during ET-131 ride uphill. 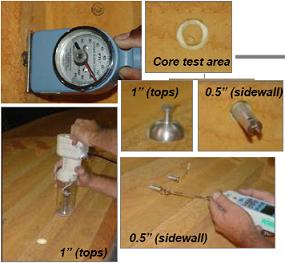 “Purpose: Provide results of additional tests and inspections performed on ET-132 / STS-128 at KSC,” noted a specific investigation presentation to the PRCB at the end of last week – and available to download on L2.

Initially, tests on just 26 areas of ET-132’s intertank were called for – all showing good results, as the foam only broke loose when the pull far exceeded the stresses expected during ascent.

However, managers then called for 126 additional tests – again showing good results, prior to a final test drive on the final quadrant of the intertank. Those results are still being evaluated, as repairs to the pull test areas are carried out ahead of rollout to Pad 39A. 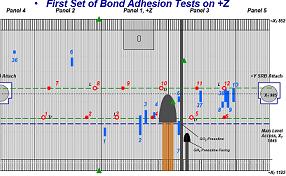 “126 additional tests performed on –Z (panels 7 and 8). 125 cohesive failures. One adhesive failure with a high tensile result at 52.4 psi. Chemical wipe performed for analysis. Results revealed no indications of contamination.

Flight rationale, which is being created for the upcoming Flight Readiness Reviews (FRRs), does not have to include specific root cause, given such an effort is near-impossible for a tank that was mainly destroyed during its re-entry.

However, the best possible understanding of both the events surrounding ET-131, and the status of ET-132 – in order to ensure the incidents do not reoccur – is the driving force behind having the best possible data for the FRRs. 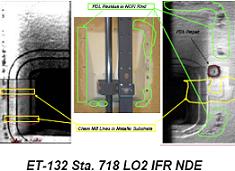 Just how much work has been undertaken can be seen in X-ray and Terahertz scans on ET-132, which show a level of evaluation most humans would be lucky to receive.

“Observations noted were either outside ramp volume or on metallic substrate features.”

X-rays were also used on the bipod closeout. Again, no issues were found on ET-132. 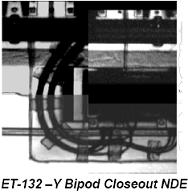 It was always the general assumption that ET-131 performed like a rogue tank, given the huge strides that have been made in reducing foam liberation since the last major foam loss incident during STS-114’s Return To Flight – itself never specifically blamed on the tank, and more likely accidental damage at MAF.

The amount of evaluations that have taken place on ET-132 should add confidence that NASA is not willing to take such assumptions as flight rationale when it comes to the safety of their shuttle fleet – even when related to an incident that failed to cause any damage to the orbiter.

Endeavour lands back in Florida – Ice noted during FCS checkout