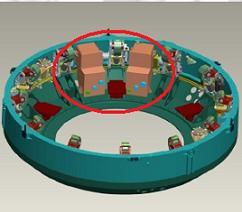 As the Constellation Program (CxP) prepares for the test flight of Ares I-X – the rocket modelled on the vehicle that will launch Orion sometime in the next decade – in less than one month, a design review of the Low Impact Docking System (LIDS) that Orion will use to dock with the International Space Station (ISS) has been completed, revealing the forward progress that has been made by engineers.

For NASA and Orion, the LIDS system represents a new design in orbital docking mechanisms.

This passive LIDS interface adapter (ATLAS) will be developed by the ISS Program – with delivery to the ISS via Japan’s HTV expected in 2013 or 2014.

As part of this review of the LIDS system, the Constellation Program has identified several risk factors for LIDS. Among these concerns are heater control, undocking separation risks, LIDS acceleration, wiring changes to LIDS design, “in space” verification of seals, and loads analysis.

The first open issue discussed in the presentation is that of heater control.

Under the new design, the heater controls will be located in the PDU box. This creates a potential issue with heater control due to “congestion” at the PDU interface.

The previous design of the LIDS system had been streamlined into a two box system that fit the available space in the Orion capsule.

However, placing the heater controls in the PDUs would require the addition of two boxes for the LIDS system. These additions would cost, time, and mass to the finalized design of the Orion Capsule.

Nevertheless, this revision of the Orion electrical system to a PDU design forced another change to the Orion to LIDS communication system. 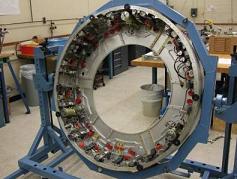 “Change guarantees that the correct serial communications will not be in the LIDS development control boxes (BB) in time for EDU 58 testing and will be a delta between EDU and flight configuration and testing,” notes the presentation.

This change has already been incorporated into flow development planning for Orion and Lockheed Martin has been solicited for their input into the design change as well as when sufficient hardware will be available for incorporation into the development and testing flow.

Also, following from the change to a PDU design, is the ongoing evaluation and revision to Orion’s overall electrical architecture.

In an effort to save/reduce as much weight as possible while still maintaining positive safety margins, Lockheed Martin is “assessing a range of options, from no change to the current LIDS umbilicals to using two #12 wires to replace a single #8 wire, to using only a single #12 wire per power umbilical.”

Currently, the LIDS project is in the process of releasing specifications in order to procure the needed power umbilicals. This is considered a “long lead procurement” by the industry. 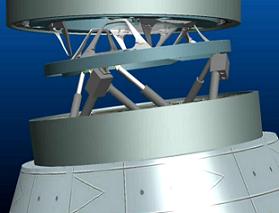 The second major open item discussed in the presentation relates to undocking and separation concerns, which was found during the Orion Vehicle Engineering Integration Working Group (OVEIWG) review.

“During OVEIWG, LIDS separation system was removed to save mass by accounting for vehicle thrusting,” notes the presentation.

However, a “small spring plunger” was kept in the design to in order to separate a LIDS from a LIDS while not inducing any relative motion between the two vehicles.

An analysis performed by Guidance, Navigation, and Control (GN&C) shows that for a nominal Orion undocking, there will need to be space between the two vehicles before separation thrusting can begin – not unlike the space that must be present between the Shuttle and ISS during undocking operations.

“The project dynamics team has provided a first assessment of the zero-rate effects of releasing Orion from ISS – which indicates we currently do not meet the proposed requirement,” notes the presentation.

The project dynamics team is conducting analyses on whether or not the LIDS soft capture mechanism is capable of providing the “pushoff” necessary to separate Orion and ISS to the distance necessary to begin separation thrusting.

The team is also considering adding several soft springs in an effort to get as much momentum as possible in a LIDS passive configuration. 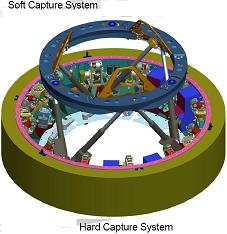 Furthermore – and an unsurprising situation for Orion – is the risk for increased mass for the LIDS system.

“LIDS is at risk for increased mass due to changing Orion launch, ascent, and abort loads,” notes the LIDS presentation.

In fact, a static test firing of the Launch Abort System (LAS) revealed that acoustic levels for LAS were higher than predicted.

Once the physical test data is integrated into the analysis, higher loads for LIDS are expected.

Finally, the requirement for On-orbit verification of redundant seals has been added to the requirements for LIDS; however, the technical community is split on whether or not this is truly necessary.

The current design of LIDS does not support this kind of testing. Therefore, the incorporation of this requirement is classed as “under assessment for impacts.”

All in all, development of LIDS is progressing on course with the rest of the Orion Capsule.