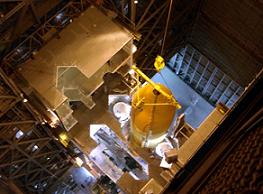 Discovery has returned to her home port of the Kennedy Space Center (KSC) on top of one of NASA’s Shuttle Carrier Aircraft (SCA). The two day cross country journey involved two stops in Texas, and an overnight stay in Louisiana. She joins her two sisters who are deep in processing for the next two missions, with STS-129 undergoing a processing milestone on Monday.

Discovery was mated to the SCA on Friday evening at the Dryden Flight Research Center (DFRC) before departing at 12:23 EDT for a refueling stop in Amarillo, Texas. A short hop over to Fort Worth followed, prior to the final journey of the day to Barksdale Air Force Base – landing at 1839 EDT Sunday night.

Planning for final leg required evaluations into unsettled weather over the flight path, before clearance was given not long after the scheduled departure time. With the NASA Pathfinder aircraft flying ahead, the best route back to Florida was picked for the SCA/Discovery duo, as they crossed over into Florida around 11am local time.

The duo landed on the Shuttle Landing Facility (SLF) at around noon time, after a decision was made to cancel a flyaround of KSC due to poor weather closing in on the region.

The rest of the day involves demating Discovery from the top of the SCA at the Mate/Demate Device (MDD) located at the end of the SLF. Once raised off the SCA, the converted 747 will reverse clear, prior to Discovery being lowered on to her wheels for the tow back to her Orbiter Processing Facility (OPF).

Inside the home comforts of the OPF, Discovery will undergo further safing and post flight inspections – picking up on the procedures that began at Dryden.

She will then head into her next flow, for the March 18, 2010, STS-131 mission – which will involve the delivery of supplies to the International Space Station (ISS) via the Multi-Purpose Logistics Module (MPLM) Raffaello and the Light-weight Multipurpose Experiment Support Structure Carrier (LMC).

A full review of her highly successful mission to the ISS is set to take place this Thursday, when the Program Requirements Control Board (PRCB) carry out the IFA (In Flight Anomaly) review – a required meeting which will also play a part in both the next scheduled shuttle mission (STS-129) Flight Readiness Review (FRR) and Discovery’s downstream STS-131 mission FRR.

Discovery joins her two sisters at KSC, both processing for their downstream missions. Atlantis is due to launch next, with her STS-129 mission to the ISS – set to deliver the Express Logistic Carriers 1 and 2 (ELC-1 and ELC-2) to the Station – due to take place in mid-November.

As noted in the processing update, inspections on Atlantis’ Fill and Drain Valves have been carried out, following issues with indications on Discovery’s LH2 PV12 valve during STS-128’s August 26th launch attempt.

The LH2 Inboard Fill and Drain Valve 50V41PV12 (PV12 for short) is located in the orbiter’s Main Propulsion (Liquid Hydrogen) System inside the Aft Fuselage of Discovery. These 8-inch internal diameter Bi-Stable Pneumatic valves are classed as Criticality 1 hardware. 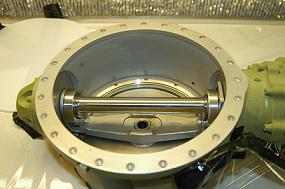 The requirement for the nominal operation and cycling of the valve mainly relates to the ability to offload propellant in the event of – for instance – a pad abort, where detanking needs to take place in a timely manner. Offloading could still occur via the alternate PV11 route, but would take twice as long – which would be undesirable.

While the issue failed to repeat itself during the next launch attempt – and performed nominally – engineers are checking the valves on Atlantis to confirm the issue is not related to identical valves on the fleet.

“Inspection of the MPS fill-and-drain valves was performed,” added engineering notes. “For PV9 and PV11, the valve-position indicator is under evaluation by Engineering.”

The PV12 valve on Discovery will be replaced during her STS-131 flow, which was pre-scheduled due to the valve reaching the end of its operational lifetime.