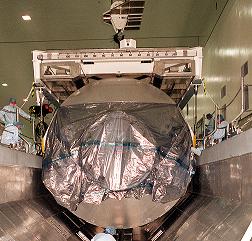 Discovery’s cross country journey back to Florida has begun its final leg , following refueling stops at Amarillo and Fort Worth, Texas, before arriving at Barksdale, Louisiana for an overnight stay.  The superstar orbiter is expected to make it back to her home base of the Kennedy Space Center (KSC) on Monday afternoon, as she rides on top of the converted 747 SCA (Shuttle Carrier Aircraft).

Discovery had no issues during her processing flow at the Dryden Flight Research Center (DFRC) – located in the grounds of the Edwards Air Force Base (EAFB) – and was almost on track to depart as early as last Friday.

However, weather along the flight path was unacceptable, leading to an extended stay in California ahead of the Sunday morning departure.

Most of the final processing surrounded the final checks to Discovery’s Thermal Protection System (TPS) at the Mate/Demate Device (MDD) – as the orbiter was raised in order to allow the SCA to roll underneath for mating.

“Tail Cone and fairing installation is complete. Final hydraulic operation to raise the landing gear and position the bodyflap is complete. Side Access Platforms are up. Orbiter lift and mate to Shuttle Carrier Aircraft (SCA) completed.”

The smooth processing at Dryden also earned praise from Space Shuttle Program (SSP) manager John Shannon on the latest Shuttle Standup/Integration report (L2) – who also hinted at the potential of flyovers of NASA centers during the trip back – as much as that would depend on the weather.

“Mr. Shannon stated that he is really proud of the team that is working at Dryden. The work is progressing well. This is a hazardous operation, so everyone must keep their eye on the ball. Whether we are able to have any fly-overs of the NASA sites during the ferry-flight back to KSC will be dependent on the weather. If we are able to work it in, we will.”

With thousands of spectators reported at the landing sites, the SCA and Discovery failed to take an optional fly-by of the Johnson Space Center (JSC), likely due to poor weather on the required flight path.

As with all missions, the Flight Readiness Review (FRR) ensures all resources are in place in the event of a Californian conclusion to a mission. For STS-128, the review was conducted in August.

“The STS-128 Ferry Planning Readiness Review was conducted on 8/5/09. No issues were identified. If a ferry flight is required, a Ferry Flight Readiness Milestone Review will be conducted one day prior to the planned start of the ferry flight,” noted the SSP FRR presentation (L2) relating to Ferry readiness.

Both of NASA’s SCAs were classed as ready to support, though a final decision resulted in SCA 911 being used, as opposed to NASA 905. Both SCAs were on site at Dryden.

“For a ferry flight beginning in September, purge equipment will not be deployed. A USAF aircraft (KC-135 or C-130J) could also be used. Ferry flight requirements are current: Ferry flight configuration drawings have been released. DFRC seven day turnaround with ready-to-ferry the morning of day eight.”

Special requirements were also listed for the payload that Discovery still has in her cargo bay, namely the Leonardo Multi-Purpose Logistics Module (MPLM). While all of its logistic supplies were transferred during Discovery’s mission to the International Space Station (ISS), the MPLM is returning a large amount of downmass from Station.

“The MPLM shell heaters will be enabled during ferry flight and at stopover locations when the ambient air temperature is less than 70 degrees F. This purpose of this requirement is to protect the MPLM structure against condensation,” the FRR presentation continued.

“There is a standard requirement to provide a purge to the forward and aft RCS (Reaction Control System) if the ambient air temperature is predicted to be less than 45 degrees F (mitigates the potential for RCS thruster leakage). There are no payload purge requirements.