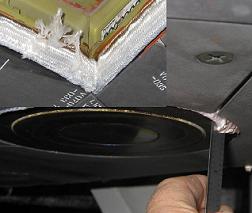 Following her highly successful STS-128 mission, Discovery is undergoing smooth processing at the Dryden Flight Research Center (DFRC), located in the grounds of Edwards Air Force Base, with hardly any items of interest noted during opening Thermal Protection System (TPS) evaluations – which in turn will aid an uninterrupted turnaround for a potential departure from California this coming weekend.

Discovery is undergoing safing at the Mate/Demate Device (MDD), which will be used to eventually raise Discovery to allow the Shuttle Carrier Aircraft (SCA) to roll underneath for mating.

The date for the duo’s trip back to the Kennedy Space Center (KSC) has not yet been set, but should follow a schedule – pending an issue-free flow – that will result in a weekend departure for the several legs of their cross country journey.

For the meantime, Discovery is being safed at the MDD, which involves the opening tasks relating to the removal of the hazardous hypergolics that require purging from her systems.

Upcoming tasks include the retraction of her landing gear, once she has been raised off the ground by the MDD.

Thanks for a superb performance from Discovery’s External Tank (ET-132), the amount of damage to the orbiter’s TPS was observed to be extremely small. That assessment has been backed up by the condition of the TPS via the runway report – which is the opening hands-on evaluation carried out post flight.

“V070-399441 chin panel gap was 0.10” right, 0.15” center, and 0.10” left. No frays or tears were observed in the chin panel gap filler other than the 1” breach cleared from the prior flight. It did not tear any further. The gap filler was adhered to the nose cap side of the gap over its entire length.”

One of the few items of interest noted by the Damage Assessment Team (DAT) via the Flight Day 3 RPM imagery pointed to a protruding sleeve on the Arrowhead section of the orbiter. This failed to grow in size during re-entry.

“Nosecap and chin panel RCC appeared nominal. Arrowhead blanket sleeving protruded over a 1.7” length with a maximum height of 0.25” as observed on orbit,” added the report.

“Midsection: MLGD (Main Landing Gear) thermal barriers appeared nominal except for symmetrical tears in the OML fabric at the forward outboard corner of both doors. Each side had OML fabric torn approximately 1.5 inches in length..

Of the small amount of tiles that did suffer damage during the ride uphill, all are deemed only as “cosmetic” coating loss, and none saw an increase in the area of damage during re-entry. One area was noted as new damage, but could have been caused during Discovery’s rollout post-landing. 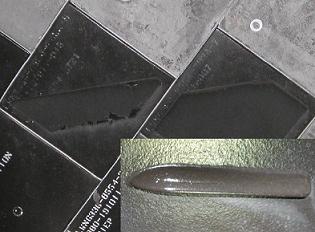 The first post flight images of the two areas relating to STS-128’s re-entry Detailed Test Objectives (DTO) were also provided in the report.

Firstly, the Boundary Layer Transition (BLT) Detailed Test Objective (DTO) – which is one of a series of tests to measure the effects of increased heating from an early boundary layer transition as the orbiter returns to Earth – is shown to be in good condition.

Two areas of cosmetic damage were observed via the RPM imagery, though they held no constraints to the results as they were either side of the BLT DTO protruding tile, as opposed to downstream of the heat flow.

The catalytic coating DTO – which involved two tiles in the turbulent heating wedge on the belly of Discovery being coated with a fully catalytic (CC-2) coating – will provide additional aeroheating data for both Shuttle and Orion.

The two green stripes seen during pre-flight photography are no longer visible, bar their outlines and a slight amount of flaking on one of the two tiles involves with the test.

Other areas will be checked either later in the flow, or once Discovery is back in her Orbiter Processing Facility (OPF), where additional access for engineers is available.

“Engine 1 dome heat shield blanket a minor tear at the lower splice line (6 o’clock position). No piano key tiles were deflected downward, however tile 395018-145 had a damage on the trailing edge inboard corner. The rudder speed brake split line trailing edge thermal barrier on the right hand side was blown out.”

Normally, areas of damaged TPS would be repaired as best as possible ahead of the SCA flight back to Florida, so as to avoid additional damage during the ferry. However, given the excellent condition of Discovery, it is unlikely any such work will be required.