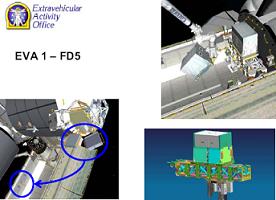 With Discovery experiencing only minor hiccups thus far in her logistics mission to the International Space Station, astronauts Danny Olivas and Nicole Stott have completed the first of three EVAs (Spacewalks) for STS-128. Meanwhile, Shuttle engineers continue to analyze the failure of the F5R Vernier thruster on Discovery — which lead to the deactivation of the entire Vernier RCS (Reaction Control System) on the veteran Orbiter.

Flight Day 5 (FD-5) focused on the first of three spacewalks for Discovery’s mission.

The main task was the removal of the Ammonia Tank Assembly (ATA) from the P1 truss, the removal of EuTEF (European Technology Exposure Facility) from the exterior of the European Space Agency’s Columbus lab, and the removal of MISSE 6A and 6B (Materials on International Space Station Experiment) from Columbus.

To begin with, Olivas and Stott unbolted the ATA from the P1 truss while the SSRMS (Space Station Remote Manipulator System — or robot arm) grappled the spent ammonia tank.

The ATA will remain on the end of the SSRMS until the end of EVA-2 — at which point it will be berthed on the LMC (Lightweight Multipurpose Carrier) in Discovery’s payload bay.

The reason the ATA could not be berthed to the LMC during EVA-1 is because the new ATA is currently occupying that location on the LMC. The new ATA will be installed on the ISS during EVA-2, thereby freeing up the space on the LMC for the old ATA.

After Stott and Olivas completed the removal and handoff of the ATA to the SSRMS, they translated out to the Columbus module where they conducted a free-float retrieval of the MISSE 6A and 6B payloads.

After MISSE 6A and 6B were removed from Columbus they were berthed in the Side Wall Carrier of Discovery’s Payload Bay.

Finally, Olivas and Stott removed the EuTEF payload from the outside of Columbus. EuTEF has been on the ISS since its launch on STS-122 in February 2008 — the same mission that launched and installed the Columbus lab to the International Space Station.

EuTEF is now stored on the LMC in Discovery’s payload bay for the return trip to Earth.

The removal of MISSE 6A and 6B and EuTEF required some internal Station and ground work in addition to Stott and Olivas’ exterior work.

“Columbus Control Center and ISS crew will power down EuTEF,” noted the EVA Flight Readiness Review (FRR) document — available for download on L2, providing a preview of the EVA.

EuTEF and SOLAR (the other experiment on the outside of the Columbus lab) have a “thermal clock” — meaning they can be without power for a limited amount of time before the thermal environment on orbit will effect the results of the two science experiments.

As such, “Shuttle crew will power on Payload Aft Main C once EuTEF is installed on LMC,” notes the FRR document. This will keep EuTEF powered during its residence in Discovery’s payload bay. 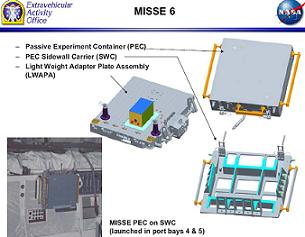 Additionally, the FRR document notes that complete installation of the MISSE 6B payload to Columbus required the use of a hammer. As such, Stott and Olivas were aware they might have to use a bit more elbow grease to remove the experiment from Columbus – which proved to be the case, as the hammer was once again used.

Finally, the FRR document noted that EVA-1 was expected to last no longer that 6-hours 30-minutes — however, natural extension of the EVA via unexpected on-orbit conditions of the ATA, EuTEF, and MISSE were planned for in the EVA timeline. In the end, the EVA lasted 6 hours and 35 minutes.

Furthermore, LiOH (Lithium Hydroxide) for Carbon Dioxide removal from the Spacesuit environment were used by both Stott and Olivas during this EVA.

Neutral Buoyancy Lab Metabolic rates show that the LiOH system would be more than efficient for both Stott and Olivas and that a repeat of the high Carbon Dioxide levels seen in Chris Cassidy’s spacesuit during STS-127 in July should not reoccur, as was proven.

As FD-5 began, mission controllers on the ground continue to work only minor issues with the 25 year old Discovery.

“The mission is proceeding nominally and per the timeline,” notes this morning’s On-orbit status report.

“Flight Day 4 Activities Completed: Unberthing of Leonardo from Orbiter cargo bay and installation on the Earth-facing port of the Harmony Node.”

MPLM Leonardo activation and ingress are complete as well, as are all EVA-1 preparations.

In addition to EVA-1, Station and Shuttle crewmembers transfered several Racks form the Leonardo to the ISS.

Also on tap for transfer to the ISS today is the COLBERT — The Combined Operational Load Bearing External Resistance Treadmill.

Also, there are only two new funnies being tracked at this point: the Trajectory Control System bearing calculation error and the non-functional OCA 48 Mbps. 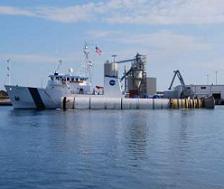 The report also notes that the SRB (Solid Rocket Booster) open assessment pre-brief occurred early this morning between 6:30 and 8:30A.M.

Also, the DAT (Damage Assessment Team) has officially cleared Discovery from the need for any Focused Inspection — thanks in large part to the extremely clean condition of Discovery’s Thermal Protection System (TPS) following launch on Friday night/Saturday morning.

Moreover, there are no damage sites that will affect that Boundary Layer Transition Detailed Test Objective during reentry and landing at the end of the mission.

Meanwhile, Steve Cash had some supportive words for everyone involved with Discovery’s mission.

“It is a great mission; we have a lot to be proud of. We have to keep our eye on the ball for the next few days, and then maybe we will get a little time for people to relax.”

Thus far, the only significant issue with Discovery is her F5R vernier thruster failure on FD-1.

Once the failure was noted, the Aeroscience and Flight Mechanics Division (AFMD) was tasked with assessing the control capability of the Shuttle for unmated and mated ops using the Alt Mode of Orbiter Control.

For Unmated Ops, the AFMD noted that the Orbiter was certified for the use of the Alt Mode for all FD-2 and FD-3 activities, with minor differences to this certification for the various tasks necessary for the first two full on-orbit days.

Finally, for Rendezvous and Docking, Alt Mode is certified with the Flight Crew fully trained to respond to the difference in control capability form the VRCS and the Primary RCS.

For mated operations, the presentation noted that the Alt Mode is either not ideal, not certified, or not analyzed for several scenarios.

For matted attitude maneuvers, Alt Mode is “not certified for use with 7 second delays and one jet control.” In fact, the Alt Mode is fourth on the list of priority control modes, with VRCS, USTO, and RS (Russian System) all preceding it.

Similarly, Alt Mode is not certified for APU Dump. The presentation also noted that the Alt Mode is “insufficient to counter disturbances for airlock venting” in the event of an External airlock HEV because “deviations could incur a maneuver which is uncertified.”

For Mated Attitude Hold, the Alt mode is certified — however, it is fifth on the priority list behind CMG, VRCS, USTO, and RS.

Likewise, Alt Mode control is certified for -Z reboost in Configuration One.

As a result of this last scenario, the originally planned mated water dump from Discovery on FD-6 has been deleted since further analysis revealed that ~60kg of RS propellant would be required to hold the Shuttle/Station complex in a particular attitude during the dump.

“The water will be stored, filling planned Collapsible Water Containers to 97.2 lbm, rather than 95 lbm,” notes yesterday’s ISS On-orbit report.

Moreover, additional analysis has been performed on Discovery’s ability to perform certain maneuvers without the VRCS during mated ops.

“Due to a failure of the F5R vernier thruster on Discovery some time after launch, the Orbiter VRCS was unavailable for docking and will be unavailable for the 17A mission,” notes yesterday’s ISS On-orbit report.

During docking operations on Sunday evening, use of the Primary RCS jets used 265kg of propellant instead of the nominal 34kg budgeted for the VRCS.

As a result, the only Orbiter-based option available for attitude control of the Shuttle/Station complex is the Primary RCS thrusters in the Orbiter Configuration-1 Burn Mode.

The On-orbit report noted that revised plans for ISS control of mated attitudes through the Russian System have been drawn up and that Discovery’s Primary RCS jets can be used in Configuration One for Debris Avoidance Maneuvers after the ISS is the proper attitude via the Russian System.